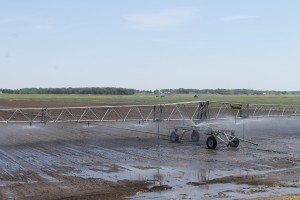 Corn and soybean yields were not the only crops affected by the 2012 drought. Everything from hay and apple crops to Christmas trees had reduced crops. The dry conditions stretched from Illinois through Ohio. Isolated rainfall had the biggest impact on yields across Ohio. Many farmers in the western portion of Ohio reported not having a harvest in some fields and some reported yielding less than a quarter of what they usually produce. Pennsylvania reported a reduced rainfall but not as bad as other Midwestern states.

USDA Secretary Tom Vilsack made the closure of five Ohio FSA offices official May 29. The county offices confirmed for closure in Ohio are: Carroll, Clark, Meigs, Montgomery and Perry counties. After the Carroll County FSA office closed, producers and landowners had to travel to Tuscarawas County office in New Philadelphia to complete paperwork or talk to an FSA employee.

Farmers whose land was legally taken by the Ohio Department of Natural Resources were assured in December 2012 that the compensation process will speed up. The Ohio Supreme Court determined ODNR was in contempt on an order to carry out the appraisals and appropriations, and ordered swift action within the coming months. Land owners have battled flooding in that county since the widening of a spillway along Grand Lake St. Marys in 1997.

story is the biggest in 2012 and may be the biggest story of many lives. As of the end of 2012, there were 469 horizontal permits issued for Utica shale wells and a total of 193 wells drilled, according to the Ohio Department of Natural Resources. In Pennsylvania, the numbers are also growing. According to the Pennsylvania Department of Environmental Protection, there were 4,020 wells permitted. Gulfport reported Nov. 28 the results of the Shugert well in Belmont County, which tested at an average sustained 18-hour rate of 28.5 million cubic feet per day of natural gas, 300 barrels of condensate per day, and 2,907 barrels of natural gas liquids per day assuming full ethane recovery and a natural gas shrink of 10 percent — or 7,482 barrels of oil equivalent per day.

Presidential incumbent Barack Obama and Republican challenger Mitt Romney differed on their tax policy, budgetary plans and social values, but it was Obama who won the campaign and his second term as president. Both candidates were supporters of the Renewable Fuels Standard, a controversial EPA policy that requires a minimum amount of corn be blended into ethanol. Inauguration day is planned for Jan. 21.

One of the hottest summers on record, along with a record drought and a record mild winter for 2011-2012, caused many producers to ask if these unusual weather events might be related to climate change. The topic of climate change had arguably cooled off since the 2008 and 2009 talks of “cap and trade,” but made a strong return this year due to the abnormal weather patterns. Farmers and researchers remain divided over their beliefs on climate change and how we should respond, but there is growing belief that the climate is changing.

We might have a new farm bill before 2013, and we might not. That was the message in the community all year and into fall, after Congress failed to vote on either the Senate or House version of the bill. The Senate version was approved by the full Senate in June, and the House version was passed by the House Ag Committee in July.

Investigators from the Ohio Department of Natural Resources confirmed that injection well fluid along a weakened geologic fault triggered the 12 earthquakes that occurred in the Youngstown area between March 2011 and January 2012. After investigating all available geological formation and well activity data, ODNR regulators and geologists found fluid from the Northstar 1 Class II disposal well intersected an unmapped fault in a near-failure state of stress, causing movement along that fault. Geologists believe induced seismic activity is extremely rare, but it can occur with the confluence of a series of specific circumstances, as seen in the Mahoning Valley.

The Ohio Cattlemen’s Association asked producers to approve an additional $1 per head for the state beef checkoff, but the measure failed to gain enough support. The final vote showed 47 percent of producers voted in favor of the increase, with 53 percent against.

A Butler County, Pa., family with 10 children took over the small screen on the GAC cable TV station this fall. The new reality TV show is about the King family and their farm, Freedom Farms in Valencia, Pa. The siblings range in age from 13 to 29, and each have their own identity and involvement in the farm. The cable station just announced the show, Farm Kings, will return for a second season.

Ohio State University named Bruce McPheron its new vice president for agricultural administration and dean of the College of Food, Agricultural and Environmental Sciences Aug. 16. McPheron, a native of Ohio and one-time 4-H agent in Clermont County, Ohio, returned to the Buckeye State from Penn State University, where he served as dean of the College of Agricultural Sciences. He started his new appointment Nov. 1. He succeeds Bobby Moser, who has served as dean and vice president since 1991, and announced his retirement in September 2011.

Ed and Tammy Sabol of Lisbon, Ohio, couldn’t believe their eyes when they found one of their heifer calves badly burned in September, apparently set on fire. And neither could their neighbors and Farm and Dairy readers, many who offered reward money for the arrest of the ones who did this. The reward has topped $12,000 and is being organized by the Canfield Auto Spa car wash. To make an offer, contact them at 330-702-9393.