WAUSEON, Ohio — The northwestern corner of Ohio is home to some of the state’s flattest and most fertile fields. The area is known for its big grain farms and large-scale livestock operations — certainly not dairy goats.

But for Del Burkholder, 50, dairy goats and the cheese he makes from them are a perfect fit.

Burkholder has tried his hand at various enterprises over the years, including swine farming and commercial painting. He ran his own painting business for many years, painting everything from houses to barns.

In 2011, however, he gave up painting because he was having severe health problems from the fumes, and soon after launched a new business: dairy goat cheese production.

Burkholder had goats since he was a young child, and he grew up on his family’s Fulton County beef farm, learning about livestock and crop management from a young age. His extended family still owns that farm, but his goat operation is its own entity.

Today, he milks 70-plus goats twice a day, and makes a half-dozen kinds of cheeses, which he markets across northern Ohio and into Michigan.

“They’re a miniature cow is what they are — except they have two teats instead of four,” he said. 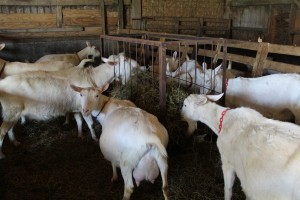 In the coming months, he expects to be milking about 125 head, and he has the demand to support it. Burkholder, who is in partnership with his son, Seth, sells the cheese to restaurants and grocery stores, and at farmers markets.

Some of his top restaurants include Bar 145, Burger Bar 419, and Manhattan’s, which all have locations in Toledo. One of his top farmers markets is the Detroit Eastern Market, where he exhibits on a regular basis.

“The demand is there,” he said. “Right now, they’re (customers) finding me.”

Many customers find him by visiting the farm, where he also operates a small retail market.
When he was planning his business in 2011 and 2012, he didn’t plan on opening a retail space on the farm. But he said he’s been “shocked” by the number of customers who come through the door.

Although it’s a small farm, of about 35 acres, visitors get to see the barns where the goats are housed, and part of the creamery where the cheese is made. The Burkholders call their business Turkeyfoot Creek Creamery, named after a creek that runs through the area.

The cheese is made by the Burkholders, as well as their employee, Kate Herring. It ages for six months up to two years, depending on the variety and the desired flavor. Sharper flavors, like the Gouda, require more aging.

The day starts early on the farm, sometimes as early as 4:30 a.m., and the Burkholders often continue late into the evening. The days are especially long in summer, when they’re balancing the goat care, milking, retail markets and haymaking.

Baling hay is one of Seth Burkholder’s favorite part about the business. He and his brother, Chad, help with baling, as well as transporting cheese to the farmers markets.

It can be a challenge to keep up with everything and to satisfy all of the customers, Seth explained.

But it’s something the Burkholders have managed very well.

Del holds about five different licenses related to his business, and he hopes to one day be able to sell the milk, or make ice cream from it. He said it’s a healthy product, but each product offered requires a different set of licensing and retail investment.

Goats can be milked for about 8-10 years, he said, or longer if the goat is allowed to skip a few breedings.

The breeds he raises include Saanen, Lamancha and Alpine. He usually gives the wethers (male goats) away, and he keeps the females as herd replacements.

He’s seen his own knowledge of dairy goats expand significantly over the past few years, with better genetics and better production. However, he’s had to find most of his mentors and herd replacements several counties away.

The area where he’s from — northwestern Ohio — is mostly crop country, with a few large-scale livestock operations.

“There’s nobody out there like me,” he said. “I’m the only one in northwestern Ohio doing this.”

He said the region’s more traditional farmers probably laugh at him for milking goats, but he’s fine with his decision, and how it’s turning out.

In fact, some have seen his success, and have considered  milking goats of their own, to supply him with milk.

Burkholder sees room for growth, but he wants to keep the business manageable and still be something that is locally run.

“This could go wherever we want it to go,” he said. “The demand is there.”

One of the biggest drawbacks to milking more goats is the labor. Dairy goats are labor intensive, especially when you manage everything from growing the feed, to the milking, processing and selling of cheese.

One of the biggest reasons for the growth is word-of-mouth. Even though the Burkholders have been milking for only three years, they have about 50 restaurant and grocery store locations.

The business is also making a name for itself nationally, winning national cheese awards with its curds and Gouda the past two years.

And yet, none of this would have happened if hadn’t been for some key things — or blessings — along the way, he says.

Burkholder, a Christian, credits his faith in God for helping him get started, and helping him find the perfect used milking parlor equipment — which he found online at a farm in Tennessee.

Some locals helped him get everything set up at his own farm, and ever since he started milking, he’s felt this was his calling.

“I honestly felt God led me this way,” he said.

He doesn’t plan to get rich off the goats, but he said they’re paying for the investment, and over the course of time, he expects to at least make a “decent living,” and continue to pay for labor.