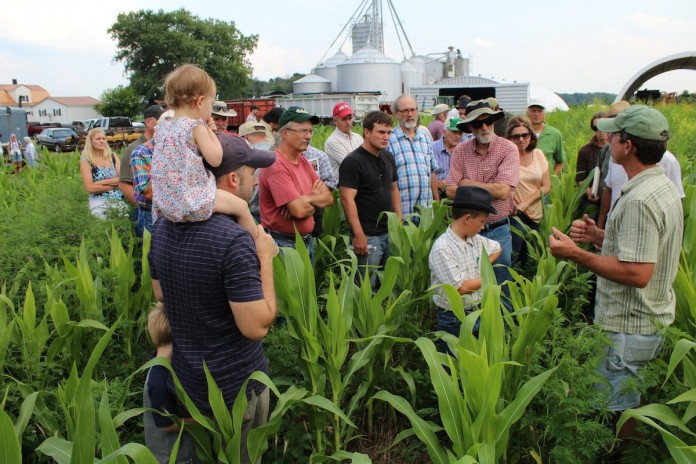 WEST SALEM, Ohio — When you think of organic, you probably think of small-scale farms of about 100 acres or less.
But that’s not always the case.

Dean McIlvaine, of Twin Parks Organic Farm in Wayne County, has operated an 850-acre organic grain farm since 1985. He welcomed guests to his farm Aug. 1 as part of the Ohio Ecological Food and Farm Association’s annual summer sustainability tour.

He grows organic corn and soybeans, spelt, oats, wheat, rye and clover, and markets them nationally and internationally. His father, Dale McIlvaine, bought the farm in the mid 1970s, and the family farmed conventionally up until 1985.

At this same time, Dale owned the area John Deere dealership and wanted to be more involved with that business, so Dean took over the farm.

Dean transitioned to an organic operation, following his college dream and his personal beliefs that organic food is healthier and better for the environment.

During the OEFFA tour, he showed some plots of organic no-till corn that he grew for the first time, and talked about how he’s using cover crops to help control weeds and keep nutrients in the soil.

He also explained some of his farm equipment — like his cover crop roller, which rolls and flattens cover crops prior to planting the main crops, and his organic weed puller — a mechanical attachment that mounts on the front of his tractor and pulls and crimps weeds in between the rows.

Following the tour, Farm and Dairy caught up with Dean to talk one-on-one about his operation and the state of organics:

Q: Why organic? Why did you make the decision to leave conventional?
A: I have had a strong aversion to the health concerns. My father and grandfather (were) both active conventional farmers with lots of exposure to synthetic fertilizers and chemicals and both died early from associated, related illnesses — leukemia and

lymphoma. There was lots of exposure there that was toxic to them.
I was never really a fan of processed foods. Once I got a taste of whole grains and real food, I recognized how much better it tasted and how much better I felt.

The contamination starts with our air, our water and our soil. And if we want to live a healthier, more productive life, we need to clean up our environment.

Q: What are the biggest challenges to being an organic grain operator?
A: The biggest challenges begin with finding adequate fertility and learning how to manage the microbial life in the soil to facilitate that fertility. And dealing with the weeds and just learning how the whole system works — that we can do it with the resources that nature has provided instead of from the toxic things that we’ve used in the conventional world.

Q: How have people’s attitudes changed toward what you’re doing?
A: They’re much more receptive. People are very curious anymore. Even in the midst of our under-achievement, there’s lots of interest and curiosity.

People recognize the cost of producing food is ever-increasing as our world’s resources are forever diminishing, and the beauty of the organic system is that we try to recycle nutrients that are available more effectively, and try and enhance the biology of the soil, which can help that transfer of nutrients from the soil to the plants.”

Q: What have been some of your biggest successes as an organic grain producer?
A: Personally, the times we’ve had good corn crops or good, clean soybean fields. But learning how to replicate that over all 850 acres has been the challenge to do so consistently. It is sort of a delicate balance and if you try to short-circuit the system, it will backfire in a hurry.

And, there’s always new challenges with the changing weed pressures and changing climate pressures. What worked last year or three years ago may or may not work this year. So, we have to be forever looking forward, to anticipate what we need, to make things grow the best.

Q: What new things are you trying or what things would you like to try?
A: I’ve always had an interest since college days to have a more value-added production system or vertically integrated system. So adding value to the crops that we grow is of interest. (He does do some of that by cleaning his own grain and dehulling, etc. for specific markets.)

… We’ve really gone out on a limb with (organic no-till in corn). It was one thing to make the leap into organics, but to do so with the row crops is equally challenging. But, it matches the overall goal of enhancing soil life by minimizing soil tillage.

Q: What would you tell others who want to begin growing crops organically?
A: Do your homework. Take a soil test to see where you are and address the long-term needs of your crops. Soil drainage and soil balancing are quite a trick, and an art and a science that are of upmost importance.

Think broadly about diversifying. And try to incorporate animal components in as much as possible. I think there’s that cycle of life that is helpful for every farm. …It goes along with the idea of recycling and using what’s nearby.

Q: Do you think you would ever go back to conventional?
A: I think about it when the weeds get taller than the crops. But, at the end of the day, I know that things aren’t always better in that camp, either. Especially with the problems with the Roundup and the GMO grains. The costs are outlandish for that technology and the results are short-sighted and short-term. There’s too many long-term costs of going back to conventional.

Q: What is the state of organic farming today?
A: It’s strong, it’s healthy, it’s vibrant, it’s growing. It’s pretty exciting to be a part of and especially to see the new, young people get involved and even poor people who want a better life. This is one of the easiest, most cost-effective ways they can do something for themselves that improves their life now and in the long run.

The interest that people have in growing their own food and doing it with a minimum or lack of chemicals is very encouraging. The hard part is replicating it over a bigger area and more acres, and day in and day out.