Currently, the ODNR is reporting 32 drilling rigs operating in the state. So far, 832 horizontal drilling permits were issued since record keeping began and 466 wells were drilled. There are 122 producing wells in Ohio.

According to the ODNR, there were 15 permits issued in Kirkwood, Warren, Somerset and Union townships. The permits were issued to Gulfport Energy Corporation and Hess Ohio Developments LLC.

Harrison and Carroll counties each had 14 new permits issued during July, according to the ODNR. All of the permits in Carroll County were issued to Chesapeake Exploration LLC in East, Perry, Union and Fox townships.

In Harrison County, the permits were divided between Chesapeake Exploration, Gulfport Energy Corporation and Hess Ohio Developments LLC. The permits were issued in Rumley, Athens and Freeport townships. 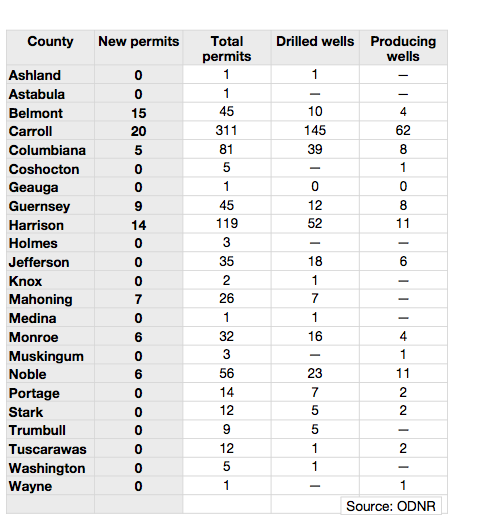 A total of seven permits were issued in Mahoning County to Hilcorp Energy Corporation in Poland Township.

Six permits were issued in Monroe County. The ODNR issued five permits to Eclipse Resources I LP. for a drilling site in Lee Township. One remaining permit was issued to Antero Resources Corporation for a well site in Seneca Township.

In Pennsylvania, the Department of Environmental Protection issues permits for oil and gas drilling.
During July, the DEP issued 264 permits and reported 153 unconventional (horizontal) wells were drilled.

Butler County led the state with the most number of drilling permits issued. The DEP issued 18 permits and eight wells were drilled there.

The DEP reported they issued 13 permits for new wells in Washington County. In addition, the DEP report showed that 12 wells were drilled.

In Bradford County, where the shale boom began in 2008, there were 24 permits issued. Three new wells were drilled, according to the DEP.

In Greene County, which is located south of Pittsburgh, there were 25 permits issued. Three new wells were drilled, according to the DEP.

Drilling appears to be ramping up in Beaver County. There were four permits issued and three wells were drilled during July.

According to the DEP, one permit was issued in each of Mercer and Lawrence counties.

Range Resources Appalachia reported to the DEP it had drilled 12 shale wells during July.

The West Virginia DEP issued a permit to Chesapeake Appalachia, LLC for a well in Ohio County. The farm is owned by GW Rentals, LLC.

In Tyler County, the West Virginia DEP issued two permits for Marcellus shale drilling. The permits were issued to Jay-Bee Oil and Gas and Noble Energy, Inc. The land in which they are drilling is owned by the company drilling.