NEW WILMINGTON, Pa. — One young man in Wilmington schools is working, in his own way, to take care of another baby boy.

Joanna McKelvey, a teacher and the FFA adviser at Wilmington Area High School, delivered a set of twins July 1. One twin, Austin, is a healthy, growing baby, but his brother, Brett, was born with a hole in his heart, and has had his share of surgeries and hospital stays since then.

Ty Phillips, a Wilmington freshman, knew the teacher because his older siblings were in her class, and wanted, somehow, to help the McKelvey family.

Phillips was at the Whiting auction barn when he found a box of John Deere (his tractor of choice) parts from an old pedal tractor was going up on the auction block. He said the idea of restoring the John Deere 520 pedal tractor popped into his mind. He thought a raffle might help pay for hospital bills for the McKelvey family. 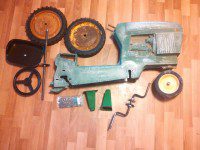 “I figured I could do it since I had already renovated a John Deere 60,” said Phillips.

So he asked his mom if he could use the remainder of his money garnered from the livestock sale at Lawrence County Fair to purchase a box of parts that he felt would make a pedal tractor. His mom, Gail Phillips, told him to go for it.

The auction was right after Thanksgiving and he knew he would have time over the Christmas school break to do the work.

“I just knew that if I could do this, it would help her and her family out,” said Phillips.

When he picked up the box, Auctioneer Duke Whiting asked what Phillips was going to do with the parts. Phillips explained his plan, and Whiting told the student to find him when the tractor was finished, and he would be the first customer to purchase a raffle ticket. 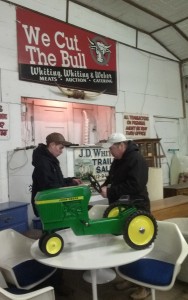 Phillips went to work on the project immediately, and continued working on it whenever he had a free moment during the Christmas break.

As soon as Phillips was finished, he called Whiting and held him to his word: The auctioneer purchased a few tickets for the raffle.

Phillips said his goal all along is to raise as much money as possible to help his teacher, Mrs. McKelvey, as he calls her, with gas and hospital bills because he realizes how expensive it must be going back and forth to Pittsburgh for medical treatment.

While Joanna and Jake McKelvey hope the trekking back and forth to Pittsburgh will eventually slow down, there are more surgeries needed, including a heart surgery set for early February to repair the hole in Brett’s heart.

McKelvey said when Brett was born with the heart defect, panic didn’t set in right away because many babies are born with the problem. However, Brett’s situation got complicated.

Many babies are born with the congenital heart disease called Blue Tetralogy of Fallot, or TET, which occurs in approximately 400 out of every million live births, according to the Centers for Disease Control. With Blue TET, oxygenated blood is blocked or limited from getting through the body. Brett doesn’t suffer from Blue TET, but from Pink TET, which means his blood is able to get the oxygen it needs, but it doesn’t get to where it needs to go.

McKelvey said she was prepared for the need for heart surgery, but the newborn Brett developed a bacterial infection in his intestines. Six days after birth, he was rushed into the operating room where doctors had to remove three-fourths of his intestine.

The tiny baby had to wear an ostomy bag for the next eight weeks.
In addition to the twins, the McKelveys have a 4-year-old son, Hunter.

Just before the doctors were ready to perform the final surgery on Brett for his intestines, he developed a staph infection and eventually sepsis.

Then, Brett developed a Mycotic aneurysm, which McKelvey said is very rare in babies.

According to the Centers for Disease Control, a Mycotic aneurysm is an infected aneurysm arising from bacterial infection of the arterial wall.

Brett was rushed into surgery again. This time for a craniotomy, where a little bit of brain matter was removed and a shunt was inserted which he will wear for the remainder of his life, according to McKelvey.

The good news is that neurologists are happy with his development and, so far, don’t think there will be many neurological effects as a result of the aneurysm.

Today, Brett is at home with his brothers but reports back to at least one doctor’s office every week.

“It’s amazing how much he (Brett) has improved since we brought him home,” said McKelvey.

As of Jan. 15, Brett was cleared to start on some baby foods besides milk and cereal to help him gain weight, but his mom said his diet will always be a concern because of the intestine problems at the beginning of his life.

Austin, his identical twin, is weighing in at 22 pounds, 6 ounces, while Brett weighs just about half that, at 11 pounds, 9 ounces. McKelvey said she is confident he will start catching up with his brother once the next heart surgery is over and he is back home again.

McKelvey is on leave from her teaching job, but she said her FFA members are a wonderful bunch of youngsters — and the feeling is obviously mutual.

“She (Mrs. McKelvey) is a great FFA adviser, and I can’t wait for her to come back,” said Phillips.

The drawing for the raffle will be held in May during the Wilmington Area FFA banquet and all proceeds will benefit Brett McKelvey.

Hop on in: Ohio hopyards open for visitors