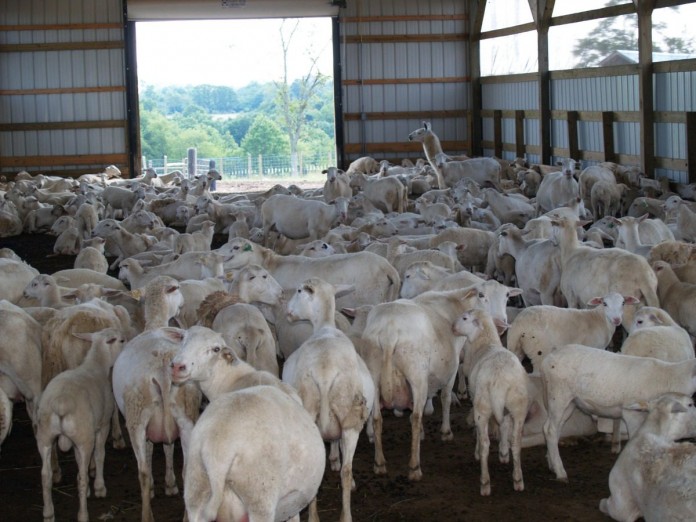 SALEM, Ohio — Rex Cunningham’s realization that he was losing his hearing came to him like it does most people — gradually.

His wife lost her hearing first, about 10 years ago, said Cunningham, a sheep farmer and former teacher who lives near Findlay, Ohio.

“I guess about five years ago, she told me ‘yours is declining too,’” Cunningham said.

“There is that stigma, and the worst thing with farmers is being in denial,” he added. “But when you are losing your hearing, it comes to a point of safety — when you are listening to a machine and there are things you should be hearing but you don’t hear.”

When Cunningham’s wife, Marilyn, finally did convince her husband to take the trip to the Ohio State University Speech-Language-Hearing Clinic, their neighbor, Jim Demler, came along for the ride.

In the end, both men were fitted with hearing aids.

“I build grain bins and all those electric impact wrenches, while you’re leaning against the bin wall, that’s what gave me mine,” Demler said of his hearing loss. “You say, ‘I’m a young guy, it’s not going to hurt me,’ but after 30-something years, it gains on you.”

Cunningham said the audiologists who examined him indicated his level of hearing loss was about typical for someone of his age and farming background.

“They suggested hearing aids, but then it becomes a matter of how much you want to invest,” he said.

“The ones I got were around $5,000. It seems to me that if you are going to invest in something important, you may as well get the best technology.”

Dr. Gail Whitelaw, an audiologist at the Ohio State University Speech-Language-Hearing Clinic, said stories like Cunningham and Demler’s are not uncommon. Still, getting the word out about advances in hearing loss treatment, as well as ways to prevent it in first place, remains a challenge.

“We can customize ways to protect your hearing and still do your job,” Whitelaw said of hearing loss in the agricultural industry specifically.

Whitelaw said the type of noise one is exposed to, as well as the frequency and duration of exposure, can have a direct effect on how severe hearing loss or tinnitus — a largely untreatable ringing in the ears — becomes.

According to the OSU clinic, roughly 65 to 85 decibels, somewhere between normal conversation and a typical factory, is the safe limit for eight hours of exposure. But activities such as lawn mowing, sheep shearing, and working among squealing pigs can result in hearing loss within three minutes to two hours without proper hearing protection, Whitelaw said.

Some of the more alarming findings to date come from a 10-year hearing-loss study by researchers at John’s Hopkins University and the National Institute on Aging. 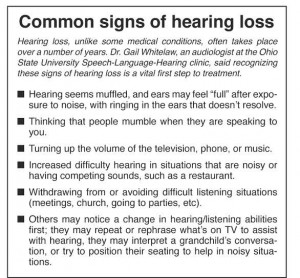 The generally slow onset of hearing loss, along with increased social acceptance of being “plugged in” to devices such as headphones and Bluetooth technology put younger generations at even more risk, particularly those who are also exposed to high decibel farm work, she said.

A project currently underway by Nationwide Insurance, the Ohio Farm Bureau, Ohio FFA, and OSU Extension is putting the issue of hearing loss in front of the members of 20 Ohio FFA chapters, according to Dr. Dee Jepsen, OSU Extension state agricultural safety leader.

The youth measured levels in a tractor with an enclosed cab and one without, on the operator’s platform and outside the tractor. They also recorded levels at a grain dryer, where the noise of the augers combine with tractors and semis.

“If you are working there all day, you are in the danger zone,” Jepsen said.

Like most people, Jepsen said, the students are surprised with the results.

“The thought is, ‘I didn’t know how many decibels a lawn mower was, and my dad doesn’t wear hearing protection, so I probably don’t need to’,” Jepsen said. “So part of the (project goal) is providing truth. It becomes a quality of life issue for them, since we are all living longer.”

Perhaps the most effective form of prevention, however, is isolating sound in a work environment or “engineering out the whole problem,” Jepsen said.

The University of Nebraska Tractor Test Laboratory, in Lincoln, Nebraska, has been doing just that for more than 40 years.

The test laboratory is the only one of its kind in the nation, conducting a range of safety tests for every tractor manufacturer doing business in the United States.

“Sound level testing began for us in 1970,” said Dr. Roger Hoy, director of the Tractor Test Laboratory. “It was actually farmers in a user group that told us we should start doing sound testing.”

Manufacturers, Hoy said, were not as enthusiastic initially.

“But a funny thing happened — manufacturers started competing with this,” Hoy said. “We can’t take all the credit (for noise-reduction advancements), but maybe we were the catalyst for things to happen sooner.”

Hoy described engineering as a series of small, unglamorous changes, but said the tractor manufacturing industry has made significant advancements in the area of noise reduction.

There are constant improvements in the science of sound transmission and new fluid dynamics software, he said, and some tractors are down to 67 decibels.

The most frustrating part of hearing loss, Demler said, is the way in which it “creeps up on you.”

“But you have got to have the right attitude,” he said of accepting both hearing loss and its treatment.

Cunningham, meanwhile, said there are still instances, such as working around the fans in his sheep barn, when wearing his hearing aids becomes difficult.

“It depends on the machine,” he said. “Sometimes when I’m (operating) a machine that exacerbates the noise, it drives you nuts and I don’t wear them; maybe I should.”

Over the years, Cunningham said, he was probably in the minority of farmers who regularly used ear muffs with working. Yet he still lost a significant amount of hearing.

“When you are younger, you don’t think it’s going to hurt you,” he said. “But don’t be in denial if you have a problem.”