Born June 5, 1930, in Youngstown, the daughter of the late Phil and Margaret (Cappy) Stratford, she was a 1948 graduate of Ursuline High School in Youngstown.

Mrs. Rhodes was a member of the Saint Paul Catholic Church in Salem, and its volunteer choir.

An active volunteer, she was a member and past state and national president of the Catholic Daughters of the Americas. She was also a member of Ladies Catholic Benevolent Association, Catholic Council of Ohio Churches, Columbiana County Extension Homemakers, Beta Theta Sorority, and the Winona Fire Department Auxiliary. She was the first recipient of the Golden Eagles Award at United High School. 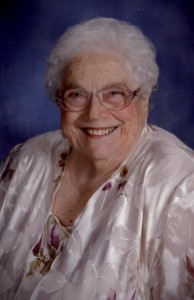 Mrs. Rhodes was honored as the Outstanding Woman of the Year by the Youngstown Diocese Council of Catholic Woman, and received papal honors from the Diocese of Youngstown.

She volunteered with the OSU Extension agricultural, 4-H youth and homemakers’ programs for more than 45 years, serving 30 years on the county’s extension advisory committee. Rhodes served as state treasurer and president of the Ohio Extension Homemaker’s Council and was a delegate to the National Extension Homemakers for many years.

She is also survived by three sisters, Blanche Lanterman of Leetonia, Phyllis McCarthy and Katie Flicky both of Knoxville, Tenn.; two brothers, Earl Stratford of Mason and Norman Stratford of Findlay; 17 grandchildren; and six great-grandchildren.

Two brothers, George and Phil Stratford, and a sister, Peggy Cappelli, preceded her in death.

Condolences may be sent online at www.starkmemorial.com.