SALEM, Ohio — Dianne Shoemaker was wearing her professional office clothes when she walked through the calf barn, but that didn’t stop her from refilling a few calves’ water buckets or from picking up a shovel to do a quick cleanup job.

Shoemaker, a statewide specialist for OSU Extension in dairy production economics, also owns a 150-head dairy farm in Mahoning County with her husband Steve. She lives what she teaches and teaches what she lives — quietly sharing her passion for dairy with farm families across the Buckeye State.

Shoemaker isn’t quite sure what propelled her — a city girl born in Columbus and raised in Worthington — into agriculture. Maybe it’s genetics (both parents were raised in dairy-rich Racine County, Wisconsin, and her grandfather milked cows), or maybe it was falling in love with Brown Swiss cows on a visit to the Ohio State Fair. Regardless of how the bovine seed got planted, it took root.

“I decided I liked agriculture because I liked cows,” Shoemaker said. A visit to Ohio State’s ag college while still in high school sealed her decision to major in dairy science.

The summer before she started college, a crew from the OSU dairy barns came into the Worthington Inn where Shoemaker worked as a server. Another waitress brought Shoemaker over to meet the students, who invited her to visit before school started.

That first quarter, she hung around the dairy barns, volunteering to do any task, then was hired as a student worker. She worked at the dairy barns until her graduation in 1982.

It was that hands-on experience — “I built the first calf hutches at Ohio State” — that helped shape her dairy science career.

“It was a challenge because at our high school, the closest thing to a class in agriculture was Advanced Biology,” she said. “What really helped me was getting that job out at the dairy barns, getting my hands on cows.”

She also found that not having a farm background was something of an advantage because she didn’t have preconceived ideas of “how we did things back home.” Other students, she explained, were sometimes not as open to what the science was saying.

“Every dairy class, to me, was just a treat,” Shoemaker said. “I just love cows.”

She capped her undergraduate career with a six-month internship on a dairy farm in Switzerland, where she milked Simmentals — a vastly different cow from today’s U.S. beef breed — and was first exposed to intensive grazing management practices.

Dianne Shoemaker frequently writes on dairy issues for the Dairy Excel column in Farm and Dairy. You can read all her columns here.

After college, she took a job managing a 60-head dairy near Hillsboro, Ohio, for absentee owners, and had complete control over day-to-day operations. She had her work cut out for her because the now-defunct farm had a sketchy financial reputation, but Shoemaker built trust with key suppliers, the veterinarian and others.

Still, being a solo 21-year-old female dairy manager created a little bit of a buzz.

“Every salesperson in a three-county area came through to see if I was still there.”

After six months, however, the owners were getting a divorce and the farm’s tenuous financial situation became even more rocky. Shoemaker came home one day to find a sheriff’s deputy tagging her house trailer for repossession.

“When the trailer goes, I go,” she told the owners.

She accepted a job as a milk tester and area supervisor with the state Dairy Herd Improvement Association in Logan and Champaign counties, and it was while working there, that Shoemaker started thinking about becoming an Extension agent.

While she had worked in Hillsboro, Shoemaker had her first exposure to Ohio State University’s Extension service when she worked with the Extension agent, Dan Cowdrey, on the herd’s ration. She continued to learn more about the university’s 88-county outreach during her time with DHI, reaching out to Glen Schmidt, then-chair of the dairy science department, and Bernie Erven, in the college’s ag economics department.

In 1984, she started a master’s degree in a unique, combined dairy science and agricultural economics program. That same year, she married Steve Shoemaker, whom she had met while both worked at the dairy barns at Ohio State. The couple has two sons, Austen and Ben, who are currently both students at Ohio State University.

Her master’s thesis? Simulating the Economic Viability of Northeastern Ohio Dairy Farms. “I haven’t gotten too far, have I?” Shoemaker laughs.

That’s because her professional Extension career since 1986 has been doing just that — working with farm families to improve their standard of living.

Shoemaker started her Extension career in 1986 as an ag agent (now called ag educators) in Columbiana County, and over the next 13 years, she juggled shared various split appointments as the ag agent in Columbiana, Mahoning, Trumbull and Stark counties.

She was named district dairy specialist in 1999, covering 18 counties in northeastern Ohio, then Extension dairy specialist in 2003 with statewide responsibilities. In 2012, she became the OSU Extension field specialist in dairy production economics, and is close to the $1 million mark in terms of grants she’s secured for research and programming over the years.

Along the way, she was part of the Extension team that developed the successful Dairy Excel program in the 1990s, in response to Ohio dairy farms’ growing lack of competitiveness and profitability.

The five-workshop series helped farm families develop mission statements, business plans and focus on overall goals and profitability. The program graduated 500, from both farms and ag industry. It was perhaps the first time advisers challenged the farm participants to answer tough questions about why they farmed.

“I still come across farms and people who made big changes because they participated in Dairy Excel,” Shoemaker said.

An offshoot was a Profitability and Expansion Initiative that included a comprehensive assessment of each participating farm’s management, finances and resources, identifying strengths and weaknesses.

The dairy team also created and trained farmers with the 15 Measures of Dairy Farm Competitiveness that provided financial and nonfinancial benchmarks for dairy farms to rate just how well (or poorly) their own operations were faring. It ended up being used nationwide. 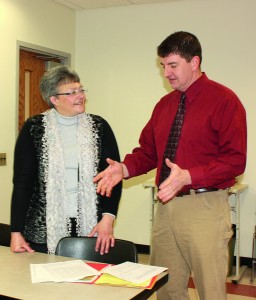 In addition to her work with farmers, the hallmark of Shoemaker’s career has been her ability to collaborate with others within Extension and the university as a whole.

“Working effectively as part of a team, you can get more things done than we can do individually.”

That teamwork extends beyond Ohio, as Shoemaker is currently part of joint grants with both Cornell and Purdue universities.

Shoemaker’s focus continues to be farm business management and analysis.

“You can’t tell how a farm is doing from the outside,” she said. “I think financial analysis is critically important — and doing it right.”

As a dairy farmer herself, she knows it’s not easy to trust an outside adviser and divulge sensitive financial information, but she’s worked hard to earn that respect.

“Some people just need someone to talk to, and it takes time to build that confidence.” 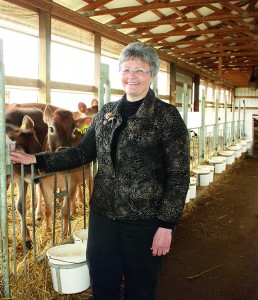 And it’s because Shoemaker — the one-time city girl — brings her own farm know-how to the table that farmers connect with her.

She can milk and feed calves and braze pipes and drive a tractor.

“Having the farm has been very helpful to what I do,” she said. “I know both sides of the checkbook.”