(Blog by Chris Kick, who attended the YAP leadership event)

As I approached the Renaissance hotel in downtown Columbus the first night of the Ohio Farm Bureau’s Young Ag Professionals conference, I had just one concern — that I might not have enough cash left in my wallet to park.

I had been to the Power Show Ohio earlier in the day, and a couple other places that required cash, and I was down to only $8 and some plastic. So, as I approached the 20-some story Renaissance, I programmed my GPS to find my bank’s ATM, and I circled the downtown until I found a place to withdraw some cash.

Turned out, I didn’t need it. The parking, the food and pretty much everything else was included in the registration. 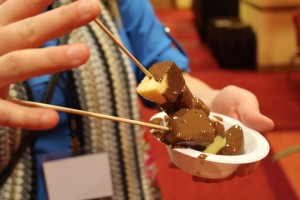 The only thing that I and the other 550 attendees needed to do was relax, mingle and learn.

And that’s mostly what I did. I dropped my car off with the valet parking staff, and from there everything was sweet as chocolate — quite literally.

There were plenty of snacks, drinks, good meals and a chocolate fountain, to satisfy the palate. And there were educational sessions and entertainment, to stimulate the mind.

A familiar group of farm boys from Kansas, known as The Peterson Bros., presented some of their musical parodies and talked about how they went from small-town farm boys, to nationally-recognized farm advocates.

That video, I’m Farming and I Grow It, became an instant sensation with more than 5 million views in less than two weeks.

Within days, the Petersons found themselves on national television and in newspapers across the country.

They used their newly-found fame to promote three things: Faith, family and farming. And they challenged Ohio’s Young Ag Professionals to promote those same things, as they interact with consumers and the non-farming public.

This year’s conference had the theme of Growing our Generation. And with more than 550 in attendance, it was “the perfect growing season,” said Jack Fisher, OFBF executive vice president.

In addition to savory food, social time and a comfortable setting — attendees were offered 16 different workshops, and a couple keynote, motivational speeches. There were workshops on hydroponics and aquaculture, micro-breweries, big data, nutrient management and yield improvement.

But my favorite was Work and Family: Where is the Balance, presented by Marcie Williams, of American Agri-Women.

She reminded everyone not to get so bogged down with work that they neglect their family and personal lives.

She discussed the different communication styles people have, and how those styles can work together to get things done.

In closing, she reminded everyone to keep their values, health, faith and family close by, and to take time for yourself. And, finally, “If plan A doesn’t work — the alphabet has 25 more letters — stay cool!”

This year’s Young Agricultural Professionals advisory team chairmen were Nathan and Jennifer Brown. They encouraged other young professionals to get involved wherever they can, and to grow and share their talents.

If you’d like to know more about the YAP organization, visit them online at http://ofbf.org/get-involved/young-ag-professionals/.

There are various upcoming leadership events, and the opportunity to be involved with the advisory team. You can also follow them on Facebook at Ohio Farm Bureau’s Young Agricultural Professionals.

‘He made every minute count’: Tony Forshey, Ohio state veterinarian, has died