SALEM, Ohio — Drilling is taking off in Harrison County, if the number of permits issued in March by the Ohio Department of Natural Resources is any indication.

The ODNR issued 71 new permits in the Utica shale in eastern Ohio during March. As of March 31, there have been 1,186 permits issued in the state since the shale boom began, with 780 wells drilled to date.

Harrison County led the state with new permits in March, with 25 sites receiving permits for drilling into the Utica shale.

It is now second to Carroll County, its neighboring county to the north, for the total number of permits issued.  There are now 211 permits issued in Harrison County for Utica shale wells.

A total of 10 permits were issued in Cadiz Township to Hess Ohio Developments LLC. in March. 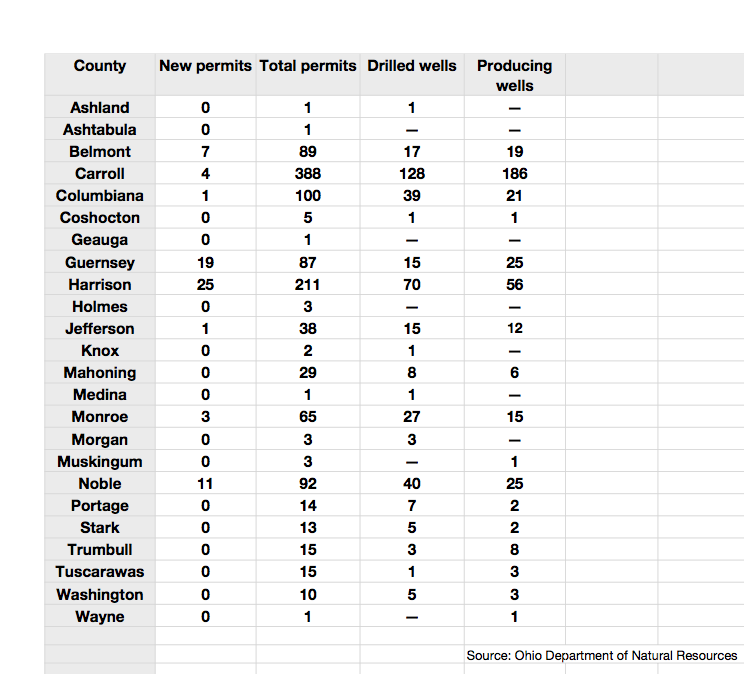 Two permits were issued Beaver Township to Antero Resources Corporation, and a single permit was issued in Stock Township to Eclipse Resources I.

There are a total of 89 permits issued for Belmont County by the ODNR and there are now 19 producing wells.

While ODNR still leads the state for the number of well permits issued, there were only four issued during March. Two permits were issued each in East Township and Augusta Township. All of the permits issued were to Chesapeake Exploration, LLC.

There are now 388 permits issued for the county and a total of 186 producing wells in Carroll County.

Two counties, Columbiana and Jefferson County, each had one permit issued by the ODNR.

In Pennsylvania, the state Department of Environment Protection issued 279 permits issued during March.

Washington County, in southwestern Pa., led the state with 59 permits being issued for unconventional or shale gas wells.

The DEP issued 52 permits for wells in Bradford County and Greene County. Bradford County is where many attribute the Marcellus shale boom to have began several years ago.

In the Farm and Dairy reading area, the DEP issued 18 permits in Butler County; 11 in Lawrence County; eight in Beaver County; two in Mercer County; three in Allegheny County and one in Crawford county.

The DEP reports show that 130 unconventional or shale wells were drilled in Pennsylvania during March. In Susquehanna County, there were 42 wells drilled.

The DEP reported that Greene County was second with 17 wells drilled and 13 in Washington County. Butler County was also popular with the drillers, with 11 drilled in March.

Five wells were drilled in Bradford County followed by three in Lawrence County and two in Allegheny County. The others were spread across Pennsylvania.

Since Jan. 1, 2014, the DEP reports it has issued 707 unconventional shale well permits.

The West Virginia Department of Environmental Protection also stayed busy during March with the number of permits issued for wells created by horizontal drilling or shale wells.

All of the permits were issued for Marcellus shale wells.

In Preston County, eight permits were issued to Mountaineer Keystone for three different properties. The permits issued are for Marcellus shale wells.

In Monongalia County, four permits were issued for the same piece of property to Northeast Natural Energy, LLC. And in Marion County, Trans Energy, Inc. received two well permits for drilling on property owned by the Consolidation Coal Company.