HARRISBURG, Pa. — Like many food banks, the Central Pennsylvania Food Bank wished it had a long-term, consistent supply of milk to offer its clients.

Milk is one of the items most requested by food bank clients, yet there is a nationwide shortage because it is rarely donated.

At the same time, Pennsylvania dairymen were struggling to build demand, and to figure out how they could get their products into the hands of the underserved, who needed them most.

Last summer, the two parties — with a huge assist from the Pa. Department of Agriculture — developed an innovative food bank milk distribution program. Through the public-private partnership, Pennsylvania dairy farmers ship milk to Harrisburg Dairies to be processed for the food bank. The ag department facilitated the process by granting the food bank a subdealer license so it could purchase discounted milk for its clients, and the food bank has committed resources to provide fresh milk every week to its sites. 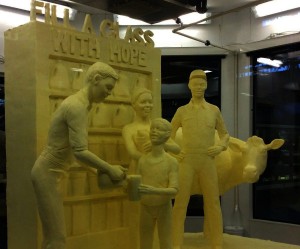 At the 2015 Pennsylvania Farm Show earlier this month, the state’s dairy industry bolstered that partnership with a fundraising campaign, Fill a Glass With Hope, to raise money for the food bank’s milk program.

At the launch Jan. 10 — which was the unveiling of the Farm Show butter sculpture that depicted the food bank campaign — donations of $42,000 had already been committed.

During the Farm Show, the campaign urged visitors to make donations at three places in the complex to help the food bank purchase milk.

“It’s humbling when you realize there is a hunger problem in this state,” said Patricia Purcell, CEO of the Mid-Atlantic Dairy Association. “My board kept asking, ‘How do we get food to children? Why can’t we crack this nut?’”

“How do we get all this wonderful food that’s produced in this state to the people who need it?”

The dairy association is part of the National Dairy Council network, which is also addressing hunger through its national fundraising campaign, The Great American Milk Drive. Through that program, shoppers can buy milk at their local store and donate it to their local food pantry.

“People think they know who comes to the food bank,” she said, “but they don’t. It’s a lot of senior citizens and families.”

Somerset County dairyman Harold Shaulis, who chairs the Pa. Dairy Promotion Program, said he was shocked to learn 25 percent of the people served by the food banks are active or retired military personnel.
“There’s no excuse for that.”

Now, he said, the system is in place to make sure milk is available.

“This group likes milk, and they wanted milk,” Shaulis said, “and now they have it.”

Outgoing Pa. Secretary of Agriculture George Greig, who was raised on a western Pennsylvania dairy farm in Crawford County, said the milk distribution program has been good for everyone, including farmers, milk dealers, food banks and Pennsylvanians in need.

“The milk distribution program is only possible because of partners in our dairy industry and at the Central Pennsylvania Food Bank.

At the butter sculpture unveiling, Greig noted dairy is the largest segment of Pennsylvania’s agriculture industry, with milk production alone contributing about 32 percent of all ag income, at more than $2.3 billion — dollars, he added, that also get spent close to home, in Pennsylvania.