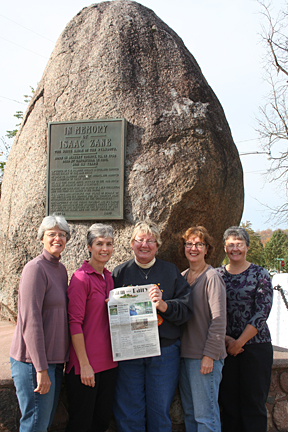 They may be on a girls’ weekend out, but they couldn’t leave Farm and Dairy at home (maybe because they couldn’t leave its editor, Susan Crowell, at home, either!). Yvonne Bennett (L-R), of Salem; Jane Moff, of Columbiana; Debbie Grammer, of Sebring; Lori Moff, of Boardman; and Dianne Shoemaker, of Salem, felt at home in the farm country of Logan County, Ohio. There, they stayed in a bed and breakfast in Zanesfield, so named for Isaac Zane. This giant rock stands in Zanesfield as a tribute to its founder.

Captured by Wyandot Indians in 1762, he grew to manhood among the Indians and married the daughter of Chief Tarhe. Zane was the first white man in Ohio’s Mad River Valley, and his fort and cabin were the site of a town later named in his honor.

A Visit to Santa Rosa Beach with the Bryans

A Visit to the Tri-State Gas Engine & Tractor Association Show