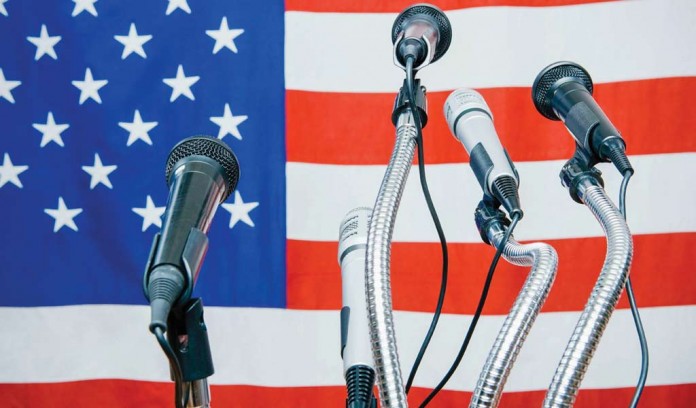 The Texas rancher was rehashing his Capitol Hill meeting over a not-real-warm steak at a swanky restaurant a block or two from the White House.

“It was pretty discouraging,” he said as he sliced into the slab of red rib-eye.

“That guy” — his congressman — “had no more idea of what he was talking about than a bluebird in a tree, but that didn’t keep him from talking.”

I liked the picture the rancher had painted, an always-warbling bluebird rather than an ever-listening owl, so I complimented him.

“Fact is,” the rancher said after a long pause, “I failed. You don’t hear a thing when your mouth’s open. He didn’t hear a word I said.”

That 30­-year-old picture came to mind after two weeks of non-stop talk from political candidates and pundits in Cleveland and Philadelphia. For anyone other than the most addicted political junkie, it was too many days of too many shouters not listening to too many speeches with too few facts and ideas.

What both party conventions did showcase, however, is a big reason why almost half of all Americans choose not to vote: Today’s political arena looks more like a scream-filled asylum to avoid than an marketplace of ideas to enter.

Political discussion, debate and decision, hallmarks of a functioning republic, have given way to partisan boasting, bullying and baloney. And that goes for members of both political parties who are more ready to dig for divisive differences than search for common solutions.

For example, the House Ag Committee, either meeting as a full committee or in separate subcommittees, has held 17 hearings on every aspect of the Supplemental Nutrition Assistance Program (SNAP), or the old food stamp program, since January 2015. Seventeen.

Why? Because majority Republicans have long held that SNAP is too expensive, too bloated and too infested with fraud to justify its cost.

SNAP costs, however, have dropped from $80 billion in 2013 to $74 billion in 2015 and, according to government forecasts, will continue to decline well into the 2020s. Still, the majority’s too-expensive view persists, a holdover from the last farm bill debate when dozens of tea party House members fought a hard and, eventually, failing battle to “reform” the program.

That fight was not forgotten; it delivered the current Committee’s obsession over SNAP where one in five agriculture hearings in the last two years has been used to X-ray federal food assistance programs.

Meanwhile, back on American farms and ranches, U.S. net farm income over that same period has dropped like a proverbial rock; it’s cratered from a record high $123.3 billion in 2013 to a forecasted $54.8 billion in 2016.

In almost any other sector of the American economy, a three-year, 65 percent crash in overall net income would be seen as a disaster, a cataclysmic event so devastating that Congress could be counted on to quickly swing into action to examine its underlying causes and develop soon-to-be-needed solutions.

Not so in agriculture today. Neither farming or ranching — or even food, for that matter — merited more than a passing mention at either recent political convention.

At some level, that was to be expected because today’s political conventions, like today’s politics, are broken. They don’t exist anymore to nominate a candidate, debate a party platform or explain new ideas. They exist to slander an opponent, ridicule an ideology and preempt debate.

Worse, this breakdown of politics is now seen by some as a root cause behind the breakdown of civic behavior.

If leaders don’t lead, why should anyone follow? In other words, if politics won’t fix growing public problems — crumbling roads, worsening schools, widening income gaps — people will find other ways, oftentimes violent, they believe will fix them.

Real fixes, however, aren’t that simple. Most involve less hard talk and more hard listening, and that’s something we didn’t hear at all from the bluebirds in either Cleveland or Philadelphia.