And ask neighbors not to throw clippings from shrubs over the fence. They could be poisonous.

As the last blasts of winter are covering our farms, it is time to make plans for spring grazing.

Many of our fields took a beating last summer and this winter as the lack of rainfall reduced forage cover. Overgrazing in these fields left forages with little root reserves to carry the plants through the winter. Livestock traffic on non-frozen ground without a good sod base added to the problems resulting from the poor weather conditions.

Now is a good time to review each field.

Early this spring would be a good time to frost seed legumes or no-till a grass/legume mix into the existing stand to boost the surviving plants.

While you are out there with your aerial map and note pad, pull and test the soil samples so you can schedule the lime and fertilizer to maximize productivity. 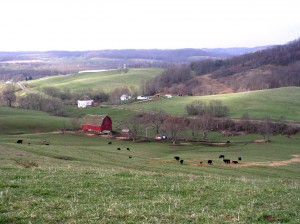 ‘Lime takes time.’ Remember, lime requires time to react, especially when applied to the surface and not worked into the plow layer. Liming a field is not an instant fix.

If your soil test calls for lime, take advantage of any days left that the fields are frozen. Spread the lime in the morning with the lime spreader to get the lime applied as soon as possible.

Your fertilizer applications are a bit trickier. It may be best to apply the fertilizer after the livestock have grazed the field once or you have made the first cutting of hay. This approach gives the plants a boost going into summer instead of during the normal spring flush of growth.

If you have a good percentage of legumes in the field, such as clovers or alfalfa, then you should count on it to provide the majority of the nitrogen for your grasses. They may also provide some nitrogen that will boost the system in the early summer and again in the fall when you’re stockpiling grasses for the winter.

With the spring green up coming soon, combined with the shortage of stored feed, the pressure is on to make decisions about scheduling livestock rotations.

If you frost seeded or plan to reseed, then you need to watch the plants carefully so they get established before the animals go through the field the first time.
Starting the rotation early and including a bale of hay in the field will get the animals out of fresh grass as it starts to green up and will also let the animals spread the manure as they go. If you chose to graze early, remember to rotate the animals frequently. This will allow the plants a chance to recover and avoids trampling them into the ground.

The grass will quickly catch up with your rotations if we have a good early spring. You can back off of the hay or supplemental feed as the forage growth speeds up.

It is also the time of year when landscape cleanup and shrub trimming can unintentionally threaten the health of our livestock.

Most folks do not realize that many plants commonly found in our yard or around our farmsteads are toxic to livestock. It only takes a small amount of trimmings from some of these plants to make livestock sick or die. Most livestock producers are aware that various ‘trimmings’ can be toxic to cattle.

Unfortunately, many of our non-farm neighbors simply aren’t aware of this. They may consider trimmings from seemingly harmless plants to simply be “organic matter” or “feed” for wildlife. As livestock owners we need to let our neighbors know about these plants and how these plants may affect our livelihood, including non-toxic but very destructive invasive plants.

Discarded ornamental yew bush trimmings are a good example of a toxic plant problem at this time of year. It only takes one-half pound of yew trimmings to fatally poison a 500-pound calf. Yew bush poisoning results in sudden death within 24 hours, occasionally preceded by respiratory difficulty, shaking or muscle weakness. There is no known antidote for yew poisoning, so prevention is critical.

If you are like most of us and do not know what all of these plants look like, the United States Department of Agriculture Natural Resources Conservation Service has an award winning online plants database found at http://plants.usda.gov/java/.

To see photos and other information about the plant simply type in the common name of the plant.

By the time that the symptoms appear in the livestock to indicate that they may have eaten a poisonous plant, it is often too late to treat the animal. For many of these plants there is no known antidote.

If you are aware of these plants the best advice is try and eliminate them, preferably before they go to seed this summer.

Take great care to avoid direct contact with these plants as many of them may also be toxic or cause skin reactions in humans.

(The author is a district conservationist with the USDA Natural Resources Conservation Service.)

Managing armyworm in forages with IPM