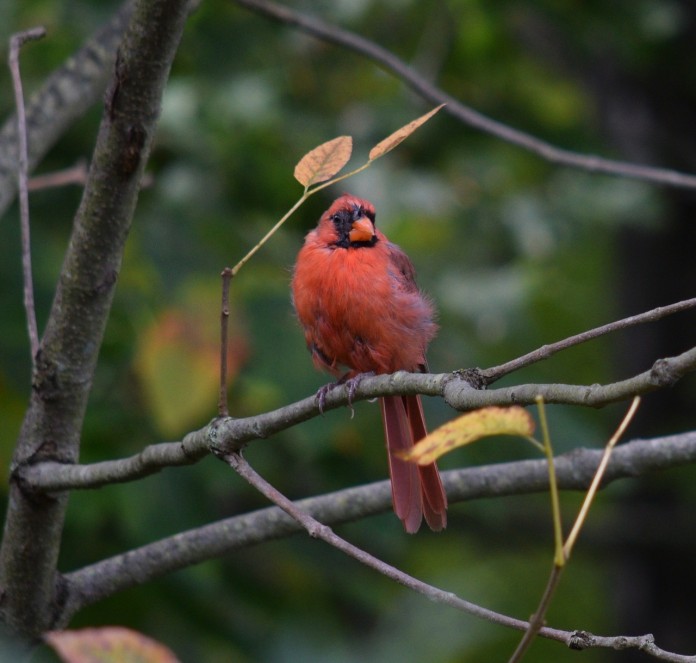 Every summer I get a few letters and emails from readers asking about “bald” birds. Usually it’s a cardinal or a blue jay, but I’ve seen photos of bald towhees, chipping sparrows, and grackles as well.

The note usually reads something like this: We’ve been feeding a pair of cardinals for several years, and they have successfully raised multiple broods. Curiously, the male loses all the feathers on his head each summer.

His skin is black, and he looks like a miniature vulture. Can you explain our bald cardinal?

I’ve seen this a few times at my own feeders, and it’s one of the more pathetic sights to greet a backyard birder. Cardinals are normally robust and commanding in their brilliant crimson plumage.

But every summer I get reports of “bald” cardinals (and sometimes other birds, too). The descriptions range from birds with “unkempt or scruffy looking heads” to the aforementioned “miniature vultures.”

This summer seems to have been a bad year for bald backyard birds. I’ve received more than 25 letters asking about it. And the letters have come from as far away as Michigan and the Carolinas.

So I have to wonder if the problem is becoming more common for some reason, or are more people simply paying attention to the birds in their backyard. I suspect the latter explanation is more likely.

Since the head is difficult for a bird to preen with its bill, it seems logical that a severe case of lice or mites could be the problem. Mites are tiny and burrow into the skin.

During my Oklahoma years, I suffered from chigger (a tiny mite) bites every summer. The itching sensation they caused was as bad as a severe poison ivy rash. If bird mite bites are as irritating as chigger bites, perhaps birds literally scratch the feathers off their heads.

Bird lice actually eat feathers so a heavy infestation of lice could also be responsible.
Others, however, blame the bald bird phenomenon on an unusual molt. Normally, song birds molt, or replace their body feathers, just a few feathers at a time, so it’s hard for even a keen observer to notice when molt is occurring.

For all the head feathers to fall out at once would certainly be unusual and hardly beneficial. The skin could get sunburned by day or torn up by thorns and tree branches. One of the purposes of feathers, after all, is to protect the body from the elements. But I’ve also read several reports from bird rehabbers who have kept a permanently injured bird for years, and some individuals dropped all their head feathers at once, year after year.

Even ornithologists cannot agree on an explanation. One once told me he had banded thousands of cardinals over the years and only a few have had naked heads. None of those had severe parasite problems.

He attributed the phenomenon to an unusual molt pattern. Another ornithologist has suggested that unusual feather loss may be due to a traumatic injury.

And one ornithologist from Washington state has studied molt for years. When cardinals just lose their crest or their heads appear scruffy, he explained, that’s probably the result of molt.

Completely naked heads, on the other hand, are not normal. When birds molt, new feathers push out the old ones, so a head should never appear completely naked. Parasites could be the answer.

Whatever the cause, birds that lose their head feathers stay bald only for a few weeks. By late September or early October, they will be good as new. Photo evidence bears this out.
I’ve seen a number of photos of bald birds taken by banders in late summer who recaptured the same bird in October, and the birds look perfectly normal. So if you see a bald cardinal (or other backyard bird), blame molt if the bird looks like it’s having a bad hair day.

But if the head is completely naked, parasites or trauma could be the problem.