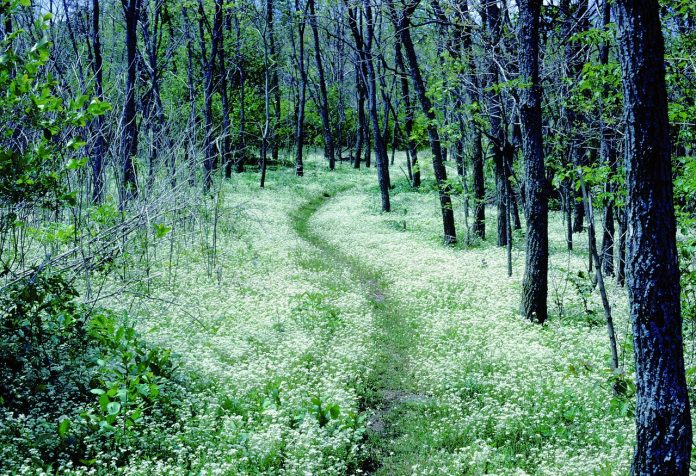 Hiram resident David Defer is on his way north right now. Hiking — as in one foot after the other, keeping pace with the rest of people in the bubble, some going fast, some slower, all heading north, following the seasons if you will.

But spring, summer, or fall the direction stays the same, north, a steady north.

Defer knows from the last five years of planning, reading, and talking about it that the pace will vary, the bubble will burst and in due time, his only company will be his own thoughts and his ability to remain in command of his feet and his determination to keep going.

Defer is going north because that’s the only direction a hiker can take if he or she hopes to complete the Appalachian Trail all at once.

The term is thru-hiking, and it’s not an easy thing to do. As many as 2 million foot-powered travelers do the Appalachian Trail in pieces and parts every year; a few miles this summer, maybe another overnight or two in the fall.

It might take several years, but by golly, it’s the only way most of us could even consider such a mind and body challenging effort.

Yep, most nibble at it, but only a very few swallow it all in one big meal of dark, lonely nights — steep, muddy trails — and rank, sweaty socks — all washed down by too many rain storms.

Defer said he has been thinking about doing the Appalachian Trail for years, and he is as ready as anyone can be. He’s between college and career, possibly the only time span he may have for a hike that typically takes most thru-hikers some seven months, give or take a week or three.

Defer is from a family of campers. “Most of our vacations have been hiking and backpacking,” he said, adding that he and his Dad have shared everything from backpacking hikes to high Colorado peaks and remote trails in other western mountain states.

Both Defers have strong and well-earned primitive camping resumes filled with Boy Scout adventures and other outdoor events.

Defer has spent summers guiding backpacking scout groups, has slept under the million or more stars, and has worn out a few boots along the way; all the while learning just how important it is to take care of the natural world around us.

Defer stepped off the first mile of his journey at Springer Mountain, Georgia, just a few days ago, part of a “bubble” of like-minded hikers who will disburse in the coming days.

Defer said that there is a point not far ahead when some will head back, others will discard anything they don’t really need, and the rest will be just keep putting one foot in front of the other.

Heading north of course, along with the warming seasons.

He said his biggest concern is the mental part of it. He knows full well that the challenge of facing the next day, time after time, can be the hardest part — even tougher than fatigue and boredom and tired ankles and some crazy tune that keeps replaying in one’s head.

He knows it, and he expects it so when it hits, he’ll be ready.

He also hopes the logistics he has planned work out so that things like food replenishment, a change of socks, and news from home reach him at right time and place.

Although Defer is starting alone, he expects to share time on the trail with other hikers who cross his path and he is looking forward to his sister spending several days and miles with him as well as a buddy who will join the journey at a meet up in West Virginia.

Later, Defer will team up with dad Chuck Defer who is planning to do a week or two, maybe more, on the trip.

On his journey, young Defer will visit some 14 states ending with the coveted Appalachian Trail finish line at Mount Katahdin in Maine. Most will look much the same, a green forest canopy that Appalachian Trail hikers call the Green Tunnel, but here and there, one can sidestep into a small town for a cone, a phone call, or one of the all-important care packages from home.

Oh, another challenge for Defer? Leaving his smartphone at home. “I want to break the habit, and I will,” he said, holding up one rather lengthy paperback.

“I have to read it because it’s the only one I’m taking,” he said.

He also plans to keep a daily journal.