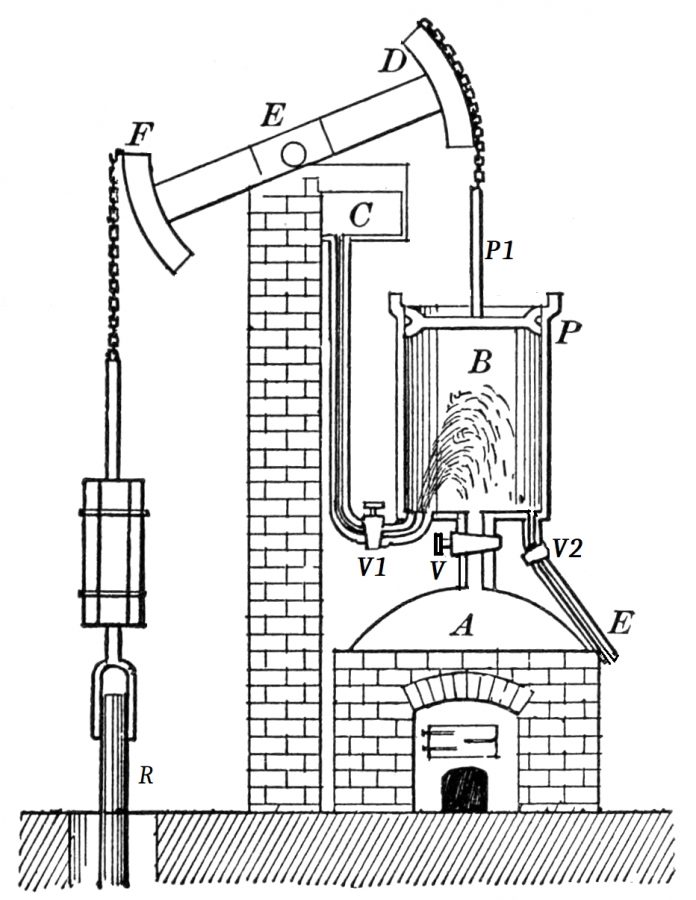 In the January 1908 issue of The American Thresherman, there was a little story about the earliest steam engines of which they had any record, which were those used to pump water from British iron and coal mines beginning in the early 1700s.

A very crude and inefficient steam pump, which had the steam pressure act directly on the water, had been invented by Thomas Savery in 1698, but in 1715 Thomas Newcomen, with the aid of a man named John Calley, erected a much better pump at a coal mine in the West Midlands.

Called “Fire Engines,” the Newcomen engines were of the walking beam type with the oak beam sometimes 16 inches square and as long as 25 feet and balanced atop a brick or stone pillar 20 or 25 feet high. The 24- to 28-inch cylinders were cast of brass or iron.

The American Thresherman points out, “The boring of a cylinder of these dimensions is no small task even now, and in those days, with no lathes it must have been a long and tedious job. The cylinder was laid on its side in a heavy wooden frame, and a lead casting of some two or three hundred pounds was cast in the cylinder forming a sort of piston.

“A rope was fastened to each side of this of this lead piston by means of strap iron. Six or eight men on each rope then dragged the lead piston back and forth, scouring the cylinder on the lower side by putting in emery and oil until it became smooth, then the cylinder would be turned a little and that part made smooth, and so on until the whole cylinder was made smooth. If they got the cylinder within one-fourth of an inch of a true circle they considered it a very good job.”

The actual piston was cast slightly smaller than the final cylinder bore and instead of piston rings, hemp or leather was driven into the gap between the piston and cylinder to make the joint tight.

The steam pressure used in those days was only around 5 pounds so this worked well.

A large boiler made of copper or iron that could produce a large amount of steam at very low pressure was used.

Newcomen placed his cylinder in a vertical position directly over the boiler. The upper end of the piston rod was fastened to one end of the walking beam by a heavy chain working over an arc so the pull on the piston would be vertical.

The vertical pump rod was connected to the other end of the beam in the same way, and the weight of the pump rod and plunger kept the steam engine piston at the top of the cylinder so the actual work in the cylinder was done on the down stroke.

A pipe containing a valve connected the boiler to the bottom of the cylinder and when the valve was opened the steam filled the space beneath the piston.

At this point, the steam valve was closed and another valve was opened that sprayed cold water into the cylinder, condensing the steam and creating a vacuum.

This vacuum, with the help of the atmospheric pressure on the piston at the top of the open cylinder, forced the piston down and lifted the pump rod.

The condensed steam escaped the cylinder through a “snifter” valve which was opened automatically by pressure inside the cylinder.

Just before the piston reached the bottom of the cylinder the water valve was closed and the steam valve again opened which broke the vacuum and allowed the weight of the pump to again bring the piston to the top.

This process was repeated over and over, one source saying 12 times a minute, and the excess water was pumped from the mines.

The steam and water valves were known as “plugs” in those days and initially were opened and closed by hand by a man or boy called a “plug boy,” or “plug man.” What a tedious job!

Before long, however, a way was found to connect linkages to the beam so the valves were operated automatically.

The Newcomen engine was a start — it supposedly was just 1 percent efficient — but as it was usually used in coal mines where fuel was plentiful that didn’t matter so much.

It was improved by several other men and one even rigged it up with a crank and flywheel to provide rotary motion.

This wasn’t very successful, however, as the single power stroke resulted in an uneven and jerky motion.

James Watt was asked to repair a Newcomen engine in 1769 and made significant improvements to it by adding a separate condensing cylinder.

This increased the efficiency of the engine dramatically and lead to a double acting engine that provided a power stroke in each direction. Newcomen died in 1729 without ever realizing much profit from his invention, and by 1800, most of his engines were gone as well.

James Watt, on the other hand, became rich and famous. It often hasn’t paid to be first in the inventing game.