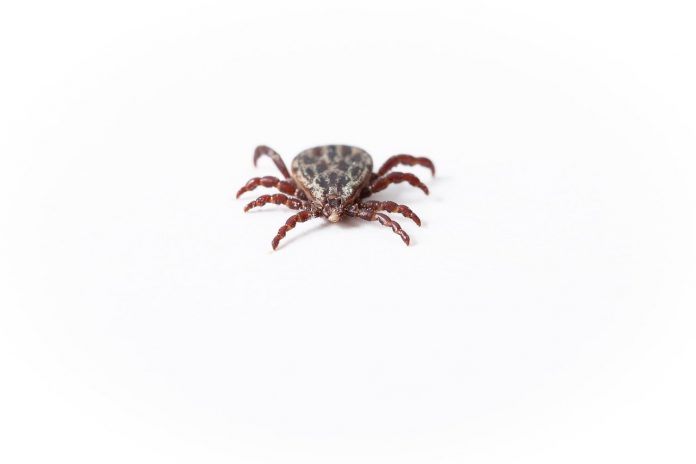 Right now, you are probably getting tired of hearing from me about new tick species and the diseases and potential allergies they vector to producers, livestock and companion animals in Ohio. I wrote an article for All About Grazing back in June 2019 warning about the mammalian muscle allergy that can make you allergic to red meat from a Lone Star tick bite.

Now we have a confirmed case of that invasive in Gallia county and are keeping our eye out for further spread. It is enough to make your head spin even further in this challenging 2020 year.

The tick we are going to talk about today is the Gulf Coast tick, Amblyomma maculatum Koch. This tick is not an invasive like the Asian Longhorned tick, but instead has a very long history of impacting the livestock industry in the United States. First described in 1844, this tick has had a historical habitat range of coastal grassy areas, as its name implies, mostly in the southeastern United States.

The tick played an important role in the spread of the devastating screw worm outbreaks in the southern United States in the early 1900s through infestations of livestock.

The bite of the Gulf Coast tick can cause severe inflammation and ulceration at the attachment site because it has a very large hypostome (mouthpart) that it uses for attachment and feeding, and this provided an easy entry path for screw worm larvae into the livestock host.

A preferred feeding site on livestock is the ears, and if numerous ticks bite and attach, you can have swelling, inflammation and drooping of the ears, also known as “gotch ears.”

This tick species has shown the ability to migrate and to spread to new habitat over time gradually expanding its range up the east coast as well as into pasture habitat in Kansas, Oklahoma and Arkansas.

It had been noted to have a migration pathway up the Mississippi River and Ohio River valleys and has now been confirmed in Ohio in Hamilton and Butler counties.

What does that mean for Ohio and our surrounding neighbor states?

The best guess is that it will continue to spread slowly to new habitat and new host ranges. This tick can travel on birds, so spread to other regions is not unheard of.

The habitat that this tick prefers is similar to the American Dog Tick, pastures, meadows or more open areas, and it is noted to be a little more sunlight and heat tolerant than other tick species. Besides birds, this tick feeds on multiple species, including humans.

In terms of medical importance to producers, companion animals and livestock, there are several diseases that we need to be aware of. It can vector, or transmit, the disease Hepatozoon americanum, a protozoal parasite which causes Hepatozoonosis in canines. In livestock, it can vector the pathogen for Heartwater, although this is not found in Ohio currently. In humans this tick is known to transmit the bacteria Rickettsia parkeri, which causes a spotted fever that is similar to, although not as severe as, Rocky Mountain Spotted Fever.

When you are outside working your animals or enjoying time with family or your pets, make sure to practice tick-safe behaviors, such as permethrin treated clothing, frequent tick checks and using repellents to keep yourself safe. Make sure to include your furry friends in your plan for ticks with a veterinary approved product for flea and tick control as well.