Nancy and I just got back from Lancaster County, Pa., where I attended the 18th annual Horse Progress Days. This was the 16th consecutive year for me at the show, and the 2011 offering was as different as night and day from those early exhibitions back in the 1990s.

The use of horses on farms declined rapidly during the 1920s and ’30s due to the proliferation of tractors, and, by 1950, all the major farm machinery manufacturers had discontinued their lines of horse machinery.

There were still a lot of horse farmers however, and they had to make do with increasingly rickety and worn-out machinery. In addition, new tilling, planting and harvesting techniques became popular and there were none of these machines available to the horse farmer except those that could be easily converted from tractor to horse use.

Local farmers and repair shops in the horse farming areas began to build and experiment with machines that could do the job, usually for their own use. As the neighbors of these inventive farmers saw the machines at work, they began asking for their own and before long, a demand was established.

American entrepreneurs being what they are, the demand, although local in nature, was soon filled. A shed beside the barn became a small factory where one or two men cut, formed and welded metal, and sawed and fitted wood into workable machines which they sold to their neighbors.

During the early years, the manufacturers didn’t advertise, relying on local users of their machines to spread the word; most of them had no plans to become big time manufacturers, but were content to work in their spare time to supply the local demand, usually building to order.

Then 30 or so years ago, a couple of these entrepreneurs began to get serious about building machinery and Pioneer Equipment of Dalton, Ohio, and White Horse Machine from Gap, Pa., started to make fore carts and plows full time.

Before long, with the help of Horse Progress Days, and publications such as Rural Heritage, Draft Horse Journal, and Small Farmer’s Journal, the word spread that actual new horse-drawn machines were available. 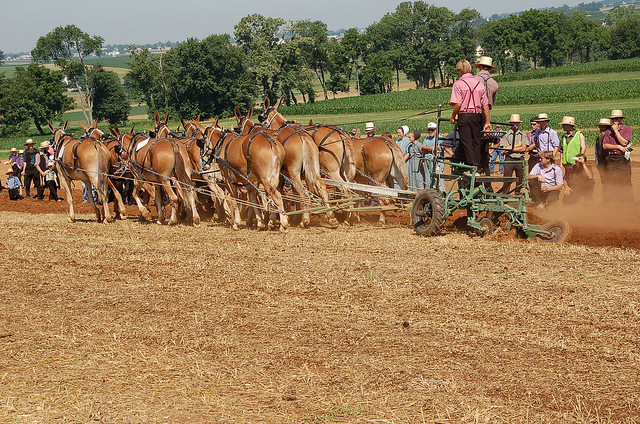 The highlight of the plowing demonstrations at this year’s Horse Progress Days: 12 Belgian mules pull an Oliver 4-bottom tractor plow that’s been converted for horse use.

At the first HPD I attended in 1996, there were maybe 12 or 14 manufacturers exhibiting their implements. This year, there must have been 20 different makes of fore carts alone, with at least 30 other companies showing a wide variety of machines. And this doesn’t include the implements from the major manufacturers that are designed for tractor use, but are either converted for horse use or pulled behind a fore cart.

The two-day event was held on the farm of Henry King, a few miles north of Gap, Pa. The approximately 20-acre field across from the farm buildings was packed with tents, which were full of exhibits of all kinds of horse farming related items.

Several horse treadmills were powering such things as pumps, air compressors, food grinders, washing machines, a chest freezer, and even a bank of four or five sewing machines.

There was plenty of food and homemade ice cream, along with machinery, tack, clothing, books, wagons — the list goes on and on. Probably at least 10,000 visitors trampled that field into dust and I’m sure glad I’m not the one who has to clean up the debris.

The field demonstrations were held in adjoining fields where corn and alfalfa had been planted. A large field of stubble was the site where the manure spreaders, plows, field sprayers, and a wide variety of tillage tools were put through their paces. Mowers, mower-conditioners, rakes and tedders, and round and square balers did their thing in the alfalfa fields.

After the balers were finished, bale movers swung into action and moved the bales to three different bale wrappers where they were encased in plastic.

Meanwhile, across the road, produce equipment was demonstrated to a large group of interested folks. Included were small plows, tillage tools, planters, cultivators, plastic mulch layers and take-up machines, both mechanical and manual transplanters, sprayers, foggers, and irrigation equipment. There was a potato planter and a digger, both one-row machines and something that small scale potato growers have long wished for.

Motive power included lots and lots of American Belgian horses, one team of Brabant Belgians, and two or three teams of Fjords, one with a foal tagging along with its mama. There was a mixed team of one Shire and one Clydesdale, another of American Cream horses, tons of mules, Welsh and draft ponies, and a couple of teams of spotted draft horses, along with a few miniature horses.

Public parking was on a hill overlooking the grounds and a steady stream of shuttle wagons, pulled by horses or mules, carried visitors back and forth.

Lancaster County, east of the highly commercialized area around the city of Lancaster, is beautiful rolling farmland dotted with well-kept farmsteads. The crops didn’t look too bad, although they were late getting started this spring due to the same wet weather that troubled Ohio.

Most corn was just shy of the old “knee high by the Fourth of July” rule, and the alfalfa looked good. A lot of wheat was being cut with binders and shocked, and some had been combined. Every farmstead had an extensive and well-kept garden, with not only a large amount of vegetables, but many flowers as well.

It’s really enjoyable to get off busy Route 30 and just drive slowly through the back roads enjoying the scenery. We stayed at a nice Best Western hotel on Route 30 in Paradise, Pa. It was only about 8 miles from the show and the swimming pool was right outside our door. The weather was perfect and Nancy enjoyed herself at the pool while I enjoyed myself at Horse Progress Days.

Next year, the event will be in a little town called Clare, in the center of Michigan’s Lower Peninsula and I hope to be there.