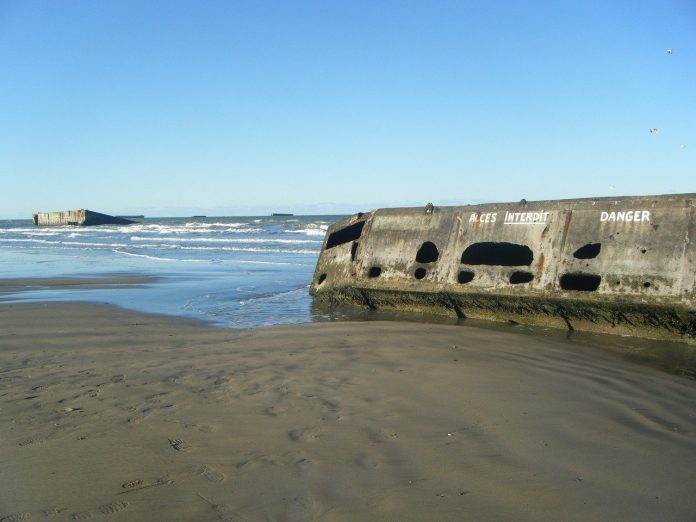 By the early summer of 1944, Joseph Stalin and the Russians were finally satisfied, as was President Franklin D. Roosevelt, who was getting his dream of defeating Germany first by attacking along the fastest route to Berlin.

Winston Churchill wanted to invade through Italy and Balkans, and opened to this invasion with the utmost reluctance. The British remembered Anzio and Dieppe from earlier in World War II. Only relentless American pressure on British leadership brought this invasion about.

The military action was the long-awaited second front across the English Channel. The Invasion of Normandy — “Operation Overlord” — was June 6, 1944. Roosevelt and Churchill hammered out the decision to invade France at the Casablanca Conference, in January of 1943, and reaffirmed it at the Quadrant meeting later in the year. Stalin turned down an invitation to attend.

Roosevelt had the Pacific War on his mind, and wanted action to defeat Germany. Churchill was willing to let the Russians and Germans fight to exhaustion and then broker a dictated peace settlement. It was at Casablanca that the Axis powers were told about unconditional surrender only.

General Dwight D. Eisenhower left the Mediterranean war zone in January 1944 and was promoted to a four-star general and given command of all Allied Forces in Western Europe. During the next five months, he directed the planning of the great crusade across the English Channel.

Under his leadership, the Anglo-American relationship, despite constant tension and disagreement between the various parties, proved to be the most effective military machine in military history. The entire plan was based on concentration of force and tactical surprise with adequate amphibious training.

The plans that British General Frederick Morgan had prepared earlier for “overlord” called for a three-division attack against Hitler’s western fortifications. Eisenhower, along with his chief ground commander, British General Bernard L. Montgomery, discarded the three-division plan and inserted a plan for five divisions.

Although most air force officers, both American and British, wanted to continue a strategic bombing campaign inside Germany, the Eisenhower plan called for concentrated bombing of railroad centers, bridges and other transportation targets inside France, to paralyze the German army. The compromise was that for every bomb dropped in France, three bombs were dropped in Germany.

The invasion area selected was the Bay of the Seine, between Cherbourg and Caen, in Normandy. The 50-mile front was large enough to handle five divisions, sheltered from the weather, had good roads heading inland, was within fighter aircraft support from England and was near a port that could be captured shortly after the invasion.

The Pas-de-Calais was the shortest shot to Berlin, but it was strongly defended, and the Germans expected George Patton to land there with the U.S. Third Army. The attack had to begin at dawn, so that the troops would have a full day to establish a beach lead and drive inland.

Other requirements were a full moon the night before, so that the airborne troopers could be dropped, and a low tide at dawn, so that the beach obstacles that General Erwin Rommel had erected to destroy landing craft could be cleared. The planners also needed a fairly calm sea, since most of the allied troops would hit the invasion area in small Higgins landing craft.

The days of June 4, 5 and 6 would meet all the requirements, assuming that the weather was good. The right combination of tide and moon would not occur again until mid-July, and that was too long to secure the principle of secrecy.

A disinformation and obfuscation scheme called “Operation Fortitude” was developed. This deceptive plan was designed to fool the German high command about the true intent of “overlord.”

Patton even paraded around northern England to give the impression that he was headed to Calais, Norway or the low-lands of Holland and Belgium with this First United States Army Group, which existed only on paper. Instructions for sabotage action were radioed to resistance groups along the Atlantic Wall.

Embassy communications were regulated, no visitors were allowed in restricted areas and “loose lips sink ships” was the saying of the day. Hitler thought this was “all theatre and impudent charade.”

Troop movement began June 2, 1944, but the next day, high winds in the English Channel made a June 4 landing impossible. The adverse weather continued the next day. That night, the weather forecast indicated that there was a break in the storm and a period of relatively calm weather beginning the night of June 5.

Eisenhower held a “council of war” and addressed the troops with the words “ok, let’s go!” That night, one British and two U.S. Airborne Divisions, amounting to 23,400 men, dropped from the sky into the French back-country. This massive parachute assault was to destroy German transportation and secure the flanks of beach landings.

On the morning of June 6, the weather did break, and more than 5,300 Allied ships, carrying nearly 160,000 troops, representing 12 countries, with 1,083 heavy bombers and more than 2,000 fighter planes overhead, hit the beaches.

The United States First Army waded ashore on the beaches code-named Omaha and Utah, and the British and Canadian Second Army splashed through the water onto Sword, Juno and Gold. All the troops got ashore successfully, except at Omaha where there was considerable difficulty.

On Utah beach, the United States Fourth Division landed virtually unopposed, because they landed in an area further east than the original landing spot. Here, the Germans had only scanty defenses, because of flooding and only one road leading inland.

By evening, the Americans had all of their equipment and troops ashore and were starting to press inland.

It was a different scenario at Omaha landing. Almost everything that could go wrong did go wrong there. It was larger than the others, exposed to the weather and was overlooked by a long, low series of bluffs covered with seagrass. There were also fewer roads going inland to the hedgerow countryside.

The allied bombing and naval bombardment had failed to destroy the well-entrenched German bunkers and fire points. The first wave, composed of the First and 29th Infantry Division, suffered heavy casualties, also because the landing crafts were hindered by the water obstruction built by the German defenders.

It didn’t help that this section had a hard, tough German commander, Lt. General Dietrich Kraiss, leading the conscripted soldiers from the Eastern Front. The heavy losses and chaotic events at Omaha in the morning hours almost spelled disaster for the entire operation.

It was the Engineer and Ranger units, who worked their way up the bluffs and overwhelmed the German bulwarks, that saved the day.

On the British and Canadian beaches, of Gold, Juno and Sword, the landings more or less went as planned, except for Juno, in the center. Here, the landing flotilla was late due to offshore reefs and beach obstacles. Montgomery’s plan to capture Caen on the first day was an idealistic dream and came apart due to overly-cautious leadership.

That day, the German and French population saw the full might of the Allied Forces. The people of Normandy suffered terribly for their liberation, leaving as many dead as the liberators did. Allied soldiers shocked the local people by their contempt for civilian property. Looting was a universal practice among the Eisenhower armies throughout the French campaign.

By the last light June 6, 83,115 British and Canadian and 73,000 American troops had landed with accompanying vehicles, equipment and provisions, and prepared to move inland toward Paris. Allied casualties had been remarkably light — far less than expected.

Records vary, but 10,000 killed, wounded or missing seems to be the most reliable number. Of this number, Americans lost around 2,500, which includes the 238 lost in the two Airborne Divisions. By June 7, all of the beaches had been joined up, and attention could be pointed towards capturing the ports of Caen and Cherbourg.

The invasion, which had all the brutal simplicity of a medieval siege, was over.

They were young boys in 1944. They are mostly gone now, having served their country and the world well. They were warriors of the Greatest Generation when they stormed those beaches, with their sights set on the defeat of Nazi Germany — which was imminent and inescapable. That’s your history!