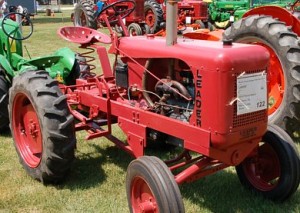 ABOVE: A 1946 Leader tractor owned by Bob and Frances Weaver of Stoneboro, Pa., at the Mercer County Antique Power Association show in 2010. This tractor has “Made in Auburn Ohio” on the front. (Sam Moore photo)

A few weeks ago I received the following note:

My name is Ben Zajicek, I am 14 years old and was wondering if you might do a piece on the Leader tractor company of Chagrin Falls. After all, it is a tractor that was made close to home. My grandfather bought a 1948D model tractor new, my uncle now owns it. My dad bought another that was used and has given it to me. It needs work but it did run. Any information you can give me would be a help. I’ve researched it at school, but couldn’t find much on it. Thanks, Ben.

First, Leader tractors were actually made in Auburn, Ohio, not Chagrin Falls, but I’ll get to that later.

During the 1930s, a father and son, Lewis and Walter Brockway, farmed and tinkered in the tiny community of Auburn, a few miles southeast of Chagrin Falls, Ohio. It seems likely that they ran a repair shop, as one source says Lewis was a sub-dealer for a Chagrin Falls Chevrolet dealer.

About 1937, the two put together a small, 4-wheeled garden tractor using a Chevy 4-cylinder engine and transmission. The little tractor caught on locally, and the American Garden Tractor Co. was formed to build 20 or so tractors per year.

It seems some of the machines were called American and some Brockway, and they were probably painted red.

The Brockways formed the Leader Tractor Company in 1940 and designed a new machine that was larger and heavier, although still with a Chevy four engine.

The first Leaders resembled the later versions, although they had round steel plates for rear wheel centers instead of square, and a fabricated tin grill instead of cast iron. Instead of red, the early Leaders were dark green with black wheels and a single bottom hand lift mounted plow was available.

About 1944, a dozen or so larger tricycle-type Leader tractors were built. Painted yellow with red wheels, these machines were designated as the Model A and were powered by a 6-cylinder Chrysler engine. At least one of these survives and I saw it at Portland, Ind., (I think) some years ago, but can’t find a photo.

By 1945, the supply of 4-cylinder engines from Chevrolet had dried up and the new Leader Model B that came out that year used a Hercules IXB 4-cylinder flat-head engine.

Nothing much else was changed, except for the all red paint job, square rear wheel centers and a rounded sheet metal nose with a perforated grill, although some may have had an expanded metal grill.

‘Made in Auburn, Ohio’

In 1946, the lower part of the nose was cast with “Made in Auburn Ohio” on it. As Leader tractors began to spread around the country, many farmers who saw them liked them and wanted more information. They wrote to the factory, addressing their letters to just Auburn, Ohio. These letters went astray or were returned because tiny Auburn had no post office.

The Model B was replaced by the popular Model D, which is the one most often seen at tractor shows, in 1947. The D was almost identical to the B except for a cast iron grill with the Leader name cast vertically in the center divider and, to eliminate the mail problem, “Made in Chagrin Falls Ohio,” under that. Chagrin Falls had a post office and, in those far off days before zip codes and strict post office rules, that the mail got through.

The Schott Brothers, who owned a string of automobile dealerships in Ohio, handled the marketing for all Leader tractors, which were selling well during those tractor-starved days. They wanted more production and loaned the Brockways a large sum to finance expansion of the factory facilities.

Unfortunately, the loan carried a pay-on-demand clause and, in 1949, the Schotts called in the loan, forcing the Brockways to sell the company to the Schotts, who closed the plant and scrapped the remaining inventory.

Lewis and Walter Brockway started again. They bought a foundry in Bedford, Ohio, and began to build a much better tractor they called the Brockway. Apparently the Brockway Truck Company of Cortland, N.Y., which had been in business since 1912, raised no objection as long as the Ohio firm was strictly a farm tractor manufacturer.

The new Brockway tractor bore a resemblance to the erstwhile Leader, although it was somewhat larger at 3,100 pounds, was painted dark yellow with red wheels, and was available with either a gasoline or a diesel engine.

While not a true 3-point hitch, the Pesco hydraulic lift allowed an attached implement to be raised and lowered.
Not quite 500 Brockway tractors were built from 1949 until production ceased in 1959.

Got to drive one

During the summer of 1949, I was working for a neighbor who did custom farming. My job was to drive a tired Farmall F-14 pulling a Case pickup baler.

We were baling on a quite steep hillside field and the F-14 was having trouble. The farmer for whom we were baling was planning to become a Brockway dealer and had a brand new one in stock. He suggested we hook the Brockway to the baler to see what it would do and let me drive it.

What a joy that Brockway was over the F-14 — electric start, padded seat, hydraulic drawbar, four speed transmission, foot brakes, and plenty of power — I was in heaven.

I went home that evening and tried to convince my father to replace our Ford-Ferguson with a Brockway, but no sale.

Take forage inventory now to prepare for the winter months