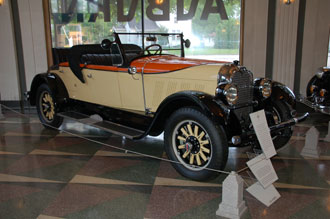 How many of you have seen a Cord automobile? Although the first Cord car was introduced in 1929, I don’t remember ever seeing one on the road when I was a boy, and I knew the name, and usually the model of virtually every car I saw.

I guess the people who owned Cords, such as Mary Pickford, the Marx brothers, John Barrymore and Frank Lloyd Wright, didn’t travel the rural and small town roads that I was familiar with during the 1940s.

The father of the Cord was one of the many colorful entrepreneurs who inhabited the U.S. automobile business back in the day — Errit Lobban Cord, a man not often heard of today.

Cord was born in Warrensburg, Missouri, in 1894, the son of a grocer father and a school teacher mother. Cord grocery failed in 1904 and the Cord family moved to Los Angeles, Calif., where young E.L. attended a polytechnic school.

The story goes that Cord scraped together a few dollars and bought a clapped out Model T Ford, which he had to push home. He soon had it running and the silver-tongued lad traded it for something better, and then traded again and again until he ended up with a spiffy $700 roadster.

This got him started and he gave up school, bought a string of tired cars, fixed them up and sold them on for a profit. Before long he wangled a job as a car salesman and began driving race cars, winning his first race in 1916 in a Paige car.

E.L. next ran a gas station, and then a chain of stations, ran a trucking and a bus company, and was said to have made and lost three fortunes by the time he was 21.

After losing the last one, Cord turned up in Chicago, reportedly with just $20 in his pocket, and got a job selling cars for the Chicago Moon dealer. The Moon automobile was never much of a success, but Cord was a super-salesman and began to sell several thousand Moon cars each year, making more than $30,000 per year in the process.

Before long Cord had saved $100,000 and decided he wanted to build cars.
By 1924, the Auburn Automobile Company, which had been building cars in Auburn, Ind. since 1900, was in trouble. They were building few cars and were selling fewer still; there were 700 unsold 1924 Auburns parked around the factory.

The Auburn investors determined that something had to be done and heard of Cord through his boss, the Moon dealer. Although E.L. was only 29, he was a ball of fire as a salesman and the investors were desperate, so they called him in.

Glib as always, Cord had an answer for every question and exuded confidence, even turning down a salary for a percentage of the profits and stock options — this in a failing company! The first thing Cord did was to repaint the 700 shop-worn cars in flashy new two-tone paint and add a few nickel-plated gew-gaws.

He called the Auburn dealers together, gave them a rousing pep talk and let them take the cars at a heavy discount. Although he took a loss on each one of them, they were gone, and he had a half-million cash reserve to use for new models in the future.

Apparently, because of unpaid bills, Auburn’s long time engine supplier, Continental, had quit delivering engines. However, Cord learned that Lycoming had just developed a straight eight engine and he wangled some of these.

Auburn engineers squeezed the new engine into the older cars and, for 1925 Auburns sported not only the flashy new paint scheme, but were available with one of the few straight eight engines on the market as well.

Growth. E.L. Cord, the born salesman, now had to invigorate the Auburn dealers and sales force, which he did through the force of his personality and his silver tongue. The dealers responded and the sales charts began to trend upward; from a low of 2,607 cars in 1924, Cord more than doubled sales in 1925 with 5,600 different models shipped to dealers.

Auburn Automobile Company wasn’t quite out of the woods, but it was getting there. For 1926, Cord decided a new, smaller and less expensive model would go over big, so in addition to the sixes and eights, a 4-44 model, with a 42 horsepower, 4-cylinder Lycoming engine and a 122-inch wheelbase was introduced.

8,502 Auburn cars were sold in 1926, and E.L. Cord was appointed president of the Auburn Automobile Company at age 32.

Before long, he would own the company and build the car that was thought by many to be the best looking American car of the 1930s, the front-wheel drive Cord L29. But that, as well as E.L. Cord’s high-flying career after Auburn, is a story for another day.