I have mentioned a few times doing a bit of research for this series of articles. This time the whole process began with the donation of some photos and printed material from a rather recent friend I met at church.

I have attended the local Methodist Church since about 1943 and my maternal grandmother was a pillar of the same church. Most of us follow this pattern of going where our family has taken us and we have developed friends. I removed my formal membership a few years back after the United Methodist change, which I disagreed with. I have been exposed to a lot of theology both before and since. I have come to admire the Reformed theology in preference to others and since TV is so bad on Sunday evenings, I looked around for a church with Sunday evening services.

So for some months now I have attended the Rose Point R.P. Church a few miles up the road for Sunday evening services, which are mostly Bible study. I soon met the church treasurer, a man named John M. Mitchell ,who told me he had read with interest some of the articles in this series. He is also acquainted with Sam Moore who writes for Farm and Dairy.

A few weeks later he handed me an envelope containing some 10 pictures and an article titled The Problem of Farm Help written by his father James L. Mitchell, probably in the middle 1950s. It turned up in the early 1990s in an old filing cabinet. Six of the pictures are threshing scenes and one is James L. with a team and buggy in front of a house in Superior, Neb., a shot of James L. cultivating corn for Ollie Mearns with a two horse outfit, a pic of James L. as a passenger in a Model T Ford driven by Floyd McFarland in Mt. Clare, Neb. and rather most interesting, a picture of a family in front of a Sod House in 1917.

John related that the family was en route from Quinter, Kan. to visit his grandad’s brother near Loveland, Colo. when they stopped at the Sod house overnight. The folks at the sod house were probably friends or acquaintances. As John relates and we well know, there were no motels in that part of the country in 1917. Indeed there were probably only the crudest roads with little or no paving.

The grandad was the Rev James T. Mitchell, trained at Geneva College in Beaver Falls, Pa. which is a center of training for the Reformed Presbyterian Church. John’s dad, James L. Mitchell, was born at Beaver Falls while his dad was studying in the seminary part of the college. It was James L. Mitchell who took most of the pictures that John has, in a rather full album. They were taken on the campus of the college, at the farms in Nebraska and at other places they lived and worked.

John recalled that his grandad’s first pastorate was in St. Johns, New Brunswick. It seems that James L. Mitchell who was a teacher as John was too, had done farm work, especially threshing, during summers when school was out of session, and most of that in the south central area of Nebraska.

In fact there is a small newspaper in the back of the photo album with an article about this summer work. One man he labored for was Ollie Mearns who had rigs for custom threshing around Superior, Neb.

One of the rigs in the pictures is an easy identification. It is a Huber engine from Marion, Ohio. The other is a standard style engine with locomotive-type boiler, which makes it harder to sort out from the many built that way. So I got out my picture books and did some real research. As near as I can tell it is a Buffalo Pitts engine, built in Buffalo, N.Y.

The next step was to contact my correspondent in suburban Buffalo who has specialized in Buffalo Pitts equipment. He confirmed that Buffalo Pitts had an agency in Lincoln, Neb. That is about 70 miles or so from Superior, where the pictures were taken. Definitely close enough to be a possibility.

Most companies had sales agents in the field, which covered a radius of a couple hundred miles, maybe more in the wide open expanses of the Midwest. Both Ollie Mearns and Floyd McFarland, driver of the model T, were R P Church members and so friends. 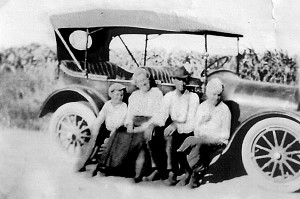 One of the threshing pictures includes three touring cars, two of which are Model T Fords, as we might well expect since they were so numerous and inexpensive. The third one I cannot identify but it is a right-hand drive machine which suggests it is quite old.

We presume the grain being processed was wheat or oats from the looks of the bundle wagons being pulled by horse teams and the straw stacks behind the threshers. In the picture with the three cars, the straw is being blown directly into the barn loft by the blower on the thresher. The engine is running but not showing any smoke.

Another picture, which appears to be the same engine in a field set is showing lots of black smoke. They might be burning straw, as there is a wagon backed up to the engine. The wagon would presumably be hauling whatever fuel is being burned by the position it is sitting at. There is also an oval water wagon beside the engine and five boys sitting in a row among the stubble, several yards from the engine.

Another picture shows the thresher being pulled by two teams of horses, one light colored team and the other dark. They likely have not moved too far from the stack as the blower pipe is still extended.

The other threshing scene is almost an aerial shot showing the whole setup. How James L. Mitchell got high enough to take the picture is hard to guess. There may have been a hill in the right place or another high straw stack or whatever.

Most of the other pictures in the album involve family and friends as well as cars and scenery in various towns, like Mount Clare, Neb. and Superior, Neb. Another is clearly marked with a caption saying it shows a 1916 Overland bought new by Rev. J. T. Mitchell. It is listed as a five passenger touring car. A model B with a four-cylinder engine.

The picture is of a couple of teachers from SHS, which I imagine is Superior High School. Quite a nice record of living and harvesting a long time ago and a long distance from western Pennsylvania.