There is a four letter word that has wreaked more havoc and cost me more money than any other word in the English language. That word is “just.” It’s not a swear word, but it probably should be.

These phrases turned on a dime (or about $10,000 if the truth is known) based entirely on the addition of the word “just.”

When it comes to buying things, “just looking” can be an expensive proposition. How many of us went from tire kicking around a car lot to signing on the dotted line? Ditto home furnishings, appliances, and many other major purchases. No one is really “just” looking. That’s a lie we tell ourselves.

Mr. Wonderful and I narrowly avoided purchasing a new camper when we realized to go to the camper show “just to check things out” was an exercise in futility. We know us. If we go, we will want. If we want, we will buy. We canceled the trip and “just” stayed home.

The one area that continues to catch me unawares is home renovation. Like the lacking-in-all-common-sense horror movie heroine who puts on her highest heels, grabs a tiny candle, and goes out to investigate the strange noise (which is always a maniacal killer), so goes it with me and home renovation.

The difference being I put my hair up in a ponytail, grab a paint sample, and pretend like any project we have ever undertaken came in under budget.

Instead of opening the door to an ax murderer, I open a wall to the rush of money and the bloodshed that inevitably comes from playing with power tools.

Like most families we have inside jokes, secret terms and speak in a code known only to us. One such code contains two simple words: wax ring.

A wax ring costs about 97 cents and sits underneath the toilet base to seal your toilet to the floor. For this reason you know it’s a crucial piece of equipment in any home. It’s also generally a quick and easy repair. For a few bucks (with tax) and half an hour you too can replace a wax ring in an otherwise functional toilet setting.

The reason it is a code in our family is that not one, but two, entire to-the-studs bathroom renovations started with the bathroom needing a new wax ring. Somehow, we went from “it’s just a wax ring” (there’s that “just” again) to completely gutting both rooms in the blink of an eye.

Once the toilets were out we “just” needed to move this or that, and “just” add a new sink/shower/entire southern wall.

Granted I love the finished rooms and I am so grateful to have them, but it is not lost on any of us that for the want of a little wax ring came months of toil and turmoil.

Wax ring is now code for “it’s going to be more — much more — than you ever imagined it to be.”

This is why I’ve been stepping over a loose tile in the kitchen for months now. I don’t even want to think about what “just” repairing one tile could cost us? A new floor? New kitchen? The entire east side of the house?

Nonetheless, like that hapless horror movie heroine, I haven’t gotten any smarter in the course of the last 15 years — or this column. Last week I looked around at the large walk-in closet dressing room and realized that it “just” needed a little sprucing up. I just need to strip the wallpaper, just prime and paint, and maybe it “just” needs a new overhead light fixture. How hard can that be? It’s just a few little things.

Looking around, hands on hips, I said to GirlWonder, “it just needs a little sprucing up.”

To this she replied, wisely, “You know this has wax ring written all over it right?”

Yes, yes it does, but it’s “just” so tempting nonetheless. 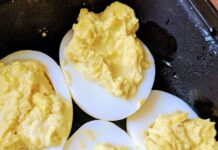 The deviled egg is in the details 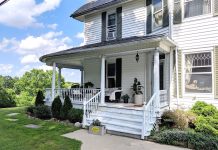