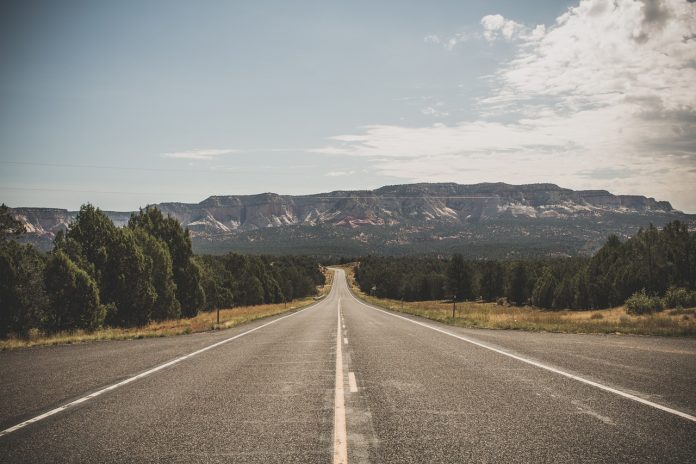 The lovely Miss Nancy fell a week or so ago, broke a bone, and is now nearly immobile, so my days are somewhat busy. For that reason, I’ve chosen to resurrect an old column or two, like this one from 2001 about the nearby Lincoln Highway.

While at a Florida Flywheelers show, I once bought a neat little book titled The Complete Official Road Guide of the Lincoln Highway.

Published in 1916 by the Lincoln Highway Association, the guide gives the background of the establishment of the highway, describes the route, and gives the prospective traveler some dos and don’ts, along with a list of the equipment, supplies and clothing that should be taken on a cross-country drive.

In addition to containing a map of the route, the guide gives a detailed town by town (through much of Utah and Nevada, the route is from ranch to ranch) description, starting in New York City and ending in San Francisco.

I’ve always been interested in the Lincoln Highway and, like most folks, thought that US Route 30, at least before limited access freeways and bypasses, was the same route. While that is true for much of the route between Philadelphia and Salt Lake City, there were many deviations during the early years.

For instance, in 1916, the Lincoln Highway left Pittsburgh and ran northwest along the north side of the Ohio River through Sewickley and Ambridge to Rochester, the route of present day Pa. Rt. 65.

At Rochester, the highway crossed the Beaver River to Bridgewater and then on into Beaver.

The route from Beaver to East Liverpool was a surprise to me.

The guide states: “The roads between these points (18 miles of the distance is the only unimproved section in Pennsylvania), will be found fair to poor, depending largely upon the weather conditions. Much grading, dragging, and rolling have been instituted. At certain points, the roads will be found to be narrow. This route is scheduled for early improvement by the State of Pennsylvania, which will make it one of the most beautiful drives in the State. The road follows the ridge route of the Tuscarawas Indian Trail.”

The highway came out of Beaver, on present day Tuscarawas Road, to Ohioville, where it turned south and ran down to the Ohio River at Smith’s Ferry, before turning west and going into East Liverpool.

I grew up just a few miles north of Ohioville and never knew the Lincoln Highway had gone through the place at one time.

About Ohio, the guide states: “The route of the Lincoln Highway across Ohio is completely marked, and rapid progress is being made both in hard-surfacing the road and in building concrete bridges to replace the old wooden structures.

“There are 66 miles of brick and 111 miles of other hard surfacing on the 244 miles of Lincoln Highway in the State, and more than $1,256,780.00 was spent on improvements during the last 18 months. The stretches of country road vary from excellent to poor in a few locations.

The top speed allowed in Pennsylvania was 24 MPH, while New Jersey, Indiana, Illinois and Iowa allowed 25 MPH. West of Iowa, no speed limits are mentioned, although the condition of the roads probably were such that going much over 20 was impossible anyway.

Costs. H.C. Ostermann, who was field secretary of the Lincoln Highway Association, discussed the cost of a trip by saying “The entire expense of a car and four passengers from New York to San Francisco, a distance of 3,331 miles, via the Lincoln Highway, should not at any time exceed $5 a day per passenger. This sum will include everything except tire expense and unforeseen accidents. In it I have included gasoline, oil and all provisions, but have not figured the repairs to the car caused by breakage or wear.”

Ostermann goes on to say, “If we assume that the tourist encounters perfect weather entirely across the country, absolutely no difficulties may be considered. Practically the only difficulties at present are the result of unfavorable weather conditions. This is due to the fact that so much of the road is yet natural dirt highway, and a season of unusual rainfall inevitably makes driving difficult.”

“The transcontinental motorist should heed the advice that when it rains in the middle west or west, the thing to do is to stop at a comfortable hotel, and not attempt to continue the journey until the rainy spell is over, and the roads have had a day or two to dry up,” he said.

“You will make more progress in the end, and you will be saved many disagreeable experiences. It is hard work driving across Illinois, Iowa, or Nebraska during or just following heavy rains.”

As for the time required, Ostermann writes: “The usual pleasure party can make the trip in twenty to thirty days, driving approximately ten hours per day. This estimate means that about 18 miles per hour must be averaged during the driving time. It is possible of course, for many long stretches to greatly exceed this speed.

“The wide open stretches of the west, where small traffic is encountered, enables the driver to make any speed of which the car is capable.”

The guide points out that “A journey from the Atlantic to the Pacific by motor car is still something of a sporting proposition. You must cheerfully put up with some unpleasantness, yet there are no hardships or experiences which make the trip one of undue severity, even to a woman. Those who want luxury and ease should take a deluxe train.

“To those who love the wide open spaces of the great west, and who enjoy exertion and the clear pure air of the western plains and the Rocky Mountains, the trip is a delightful outing.”

Quite a difference from today’s cross-country motorist, who tools along a smooth interstate highway at 70 MPH, in climate controlled comfort, while listening to his favorite music on the car’s sound system.