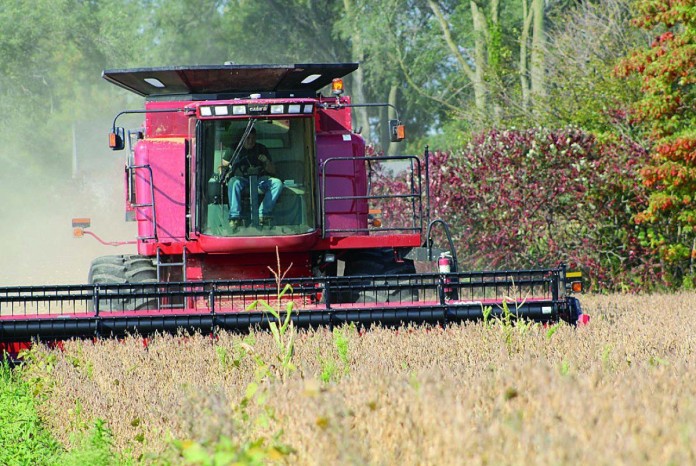 Corn and soybean prices are rallying strongly off what seem to be the harvest lows, even as harvest has a long way to go, especially in Ohio.

This is not unusual in a cheap year, and it is encouraging.

Corn and soybeans made strong gains in the early session Tuesday, Oct. 28, after a strong showing Monday on the Chicago Board of Trade. The December corn futures high this morning (Tuesday) was at 3.71, the highest price in more than two months. On Aug. 22 we hit 3.73 3/4.

Remember that we got as low as 3.18 1/4 when we started October, so we have gained over 50 cents in this month so far. We finished the early session at 3.69, off the high but still up 6 cents for the day so far.

Wheat futures have gained, even as that crop is still being planted. Chicago December futures are at 5.30 1/2 after the early session Tuesday, just a half below the high of the day. That early session close is up 7 3/4 for the day after a nickel gain on Monday.

For some time, we have been looking for record corn and soybean crops. This has tended to force prices lower than maybe the harvest warrants. The early low is an indicator of a mood change, although the turn came more on delayed harvest than anything else.

Now we are hard in harvest, but prices are still going up. The U.S. has harvested 46 percent of the corn crop, up from 31 percent last week, and lagging the 56 percent of last year this time. The five-year average would have us 65 percent done by now.

Ohio is behind the rest of the country and behind average. We have 36 percent of the corn off, up from 23 last week, but off the 46 percent of last year and off the 44 percent average.

Note that we are closer to normal pace than the nation as a whole, since we harvest later than some states. So, we continue to be late.

We have not had a killing frost in central and north central Ohio except locally. That is good, since some farmers say they have corn that still does not show black layer.

The soybeans are a similar situation, except that Ohio badly lags the normal pace for soybeans. The U.S. is at 70 percent as of Sunday night, up from 53 percent last week. Last year we had 75 percent done versus the average 73. So, the U.S. is just behind normal.

Ohio farmers, however, have only 50 percent of the beans cut, up from 36 last week. Last year, however, we had 80 percent done by now, and the average is 73 percent by now.

Ohio farmers were running some corn while the beans were drying out from the rains of last week. We saw a big push for beans last weekend, and many farmers are finishing beans right now.

Meanwhile, winter wheat planting is on pace, although there are not going to be many acres in Ohio. We have gotten used to planting after beans, and the beans are late.

Locally we have wheat planted on the earliest bean stubble. One local farmer sprayed Paraquat to hasten harvest so he could get wheat in.

The U.S. wheat planting is reported at 84 percent done as of Sunday night. This is up from 76 percent last week and 85 percent last year at this time. The average is 84 percent.

The weather forecast would have us believe that we will continue to have good harvest this week. That is subject to change. On the one hand, the chance of precipitation is modest, but on the other hand the chance of rain is there the next five days. It remains to be seen how this works out.

The rally is also an iffy thing. We have now bounced 50 cents on corn and 1.30 on beans, but it remains to be seen if we have gained as much as is possible.

There is nothing in the market to indicate we could have high prices. We have just seen a bounce from awful prices.