During the 2015 Super Bowl, one of the commercials that created a buzz was a 60-second spot that highlighted the Always brand’s “Like a Girl” campaign. The ad showed the differences in how adults and children perceived the phrase, “like a girl.”

Individuals were asked to demonstrate what it means to do something, like fight, throw or run, “like a girl.” The adults and even young boys gave prissy or buffoonish examples, arms or legs flailing, or worried about their hair.

But the young girls simply showed how they would throw a punch or a ball, or run as fast as they could. With intensity, grit and strength.

Always was trying to fight the stereotype that girls — women — can’t “do” something with the same determination and talent as their male counterparts. 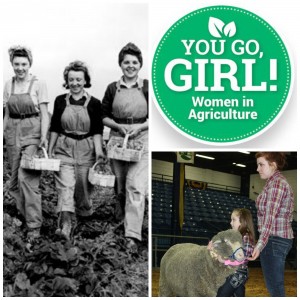 This week, we kick off an eight-week series on women in agriculture, You Go, Girl. It’s our hope that by spotlighting eight amazing, intelligent, driven women in various facets of agriculture, we can help dispel the myth that females farm “like a girl,” and that they are perfectly capable of farming. Period.

Women farmers and female ag industry managers and leaders are still the exception, not the rule.

Twenty-six years ago this spring, Farm and Dairy did a similar series on women in agriculture, and I remember the stories I wrote like it was yesterday. Twenty-six years, and nothing’s changed.

Agriculture is still a predominantly male occupation, and the new salesman coming down the lane still asks a woman farmer, “Is your husband around?”

There are traditional roles, like managing childcare, that also add to the stress of being a full-time female farmer. And there are unspoken stereotypes that challenge women farmers, like being taken seriously by some.

Twenty-six years, and yet everything has changed.

While the most recent Census of Agriculture shows a drop in female principal farm operators, the total has been steadily increasing since first tracked in 1978.

But beyond the numbers, even in the still-male-dominated world of agriculture, I think there is greater recognition that women can be as effective as men at owning or managing a farm.

We’re not alone in our effort to draw attention and encourage women in agriculture.

Agriculture is still a man’s world. But we want to show that it’s also a woman’s world.