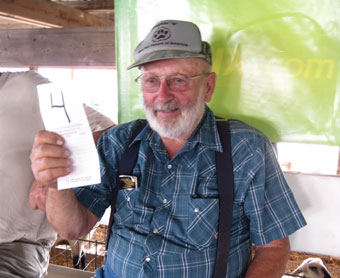 While touring the Portage County Randolph Fair, I spotted avid Suffield, Ohio outdoorsman Al Kisamore in the hog auction audience. He was representing the Ohio Fur Takers club, an active conservation-minded group that each puts its money where a needy mouth is.

The club raises money each year at several social events, then spends a good portion of it buying project hogs, which are then donated to area food banks.

According to Kisamore, the effort supports and rewards the young farmers who raised the hogs, and provides food for the less fortunate. He said that the Fur Takers consider the annual hog-buying program a community service.

“Big” Al Kisamore sets a great standard for other sportsmen who see the need to actively promote citizenship along with their favorite outdoor pursuits. He is a skilled trapper, hunter, and conservationist. He is also the first person in line when it comes to helping others. We should all take note of his fine example.

A new law recently passed in Ohio requires non-resident land owners to purchase a non-resident hunting license and appropriate tags as well as fishing license. The law went into effect on July 1, 2011, and applies to children and grandchildren if they are also non-residents of Ohio.

Ohio resident status is considered to be a person who has resided in the state for the past six consecutive months.

Prior to the new law, non-residents could legally hunt and fish on land they owned in Ohio. Not so any longer. The change will also affect Ohio residents who have been able to hunt land they own in Indiana since the once reciprocal law allowing that practice is now nullified.

A reminder too that written permission for hunting is required and it must be carried while hunting.