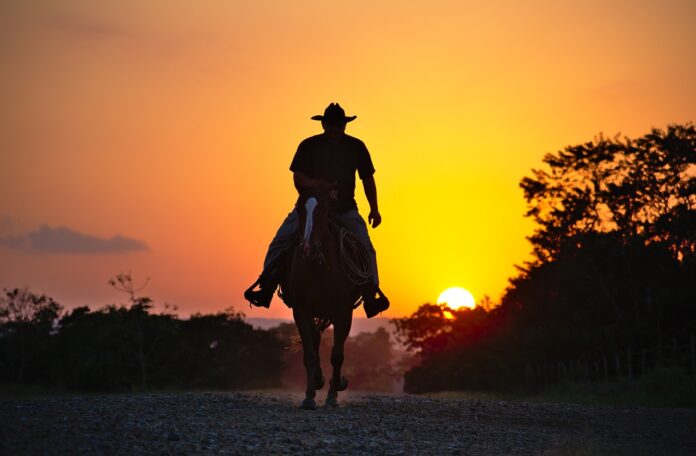 Fred and my father were best friends since childhood. They nicknamed each other Fred and Jack, after two local conservative brothers.

My father’s friend Fred was an avid horseman, and I believe the toughest cowboy I ever met. He was also very competent in working with pack horses or mules. He worked for my father every summer and fall and was by far a top hand even though he walked with a gimp from an injury he received on a naval ship, 25 years earlier.

The season was late fall, and they were finishing up on a contract with the Forest Service. Fred was leading a string of four pack horses. He was riding a mare who was known to be, let’s just say a little on the rank side. All the hands called the mare, “Peterson,” and then would chuckle a little. I never learned the connection but could only assume she was named after someone with a nasty disposition.

Fred was about 45 minutes away from camp when Mother Nature called. He climbed down and was about to take care of business when Peterson decided to kick in his direction. Fred couldn’t get out of the way. He said he felt his femur snap.

It was getting close to dark and the temperature was already below freezing. Fred realized the seriousness of his situation and immediately tied a tree limb to his leg for a splint. He contemplated building a fire and staying put, but wasn’t sure if he would be able to crawl around to collect firewood.

Fred said he hopped on his good leg over to Peterson, grabbed the saddle horn with his left hand and the back of the saddle with his right and pulled himself up on the saddle. (Try doing that next time you climb on your horse. It takes incredible upper body strength.) Fred said he almost passed out from pain when he swung his leg over the saddle.

He grabbed the pack horse’s lead rope and headed for camp. By now it was darker than the inside of a cat. So, Fred gave Peterson her head knowing she would take them back to camp. Fred said it seemed like hours, but it was only a few minutes when Jack, holding a flashlight, came riding up on Shortcut, a bay he’d ridden for years.

Fred knew if anyone came to find him it would be Jack. Jack fired three emergency shots in the air with his .308 rifle. Other workers came running with lanterns and flashlights to help Fred get back to camp. A makeshift ambulance in the backseat of a car provided a bumpy ride to the hospital. No Lifeflight.

All of this in a cowboy’s day. He didn’t ride off into the sunset which is so romantically portrayed on television. Fred once again healed over and was back in the saddle leading a pack string the next year. He wasn’t riding Peterson as she wasn’t available to ride anymore, but was doing a great job of gluing papers together.

Fred passed away years ago. The world lost a true cowboy. In the end, did he get to ride off into the sunset? I just want to say, if he did, he darned well earned it.