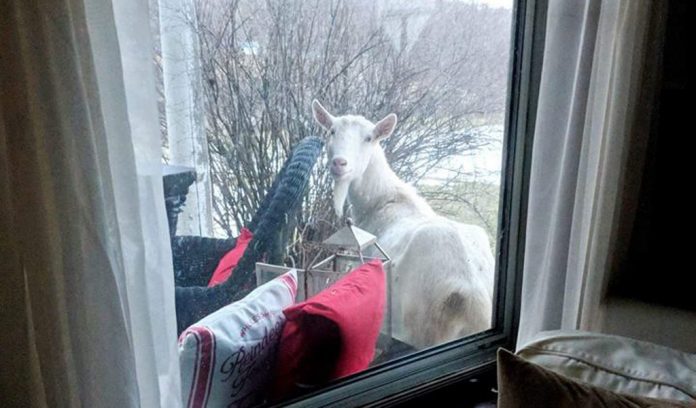 Remember senior superlatives? Back when I graduated high school during the Paleozoic age, our yearbook offered nominees for “Best Hair” or “Class Clown.” I would like to think that if it had been one of the choices, I would have been voted the girl “least likely to have livestock on her porch.”

I’m not trying to be uppity. I just feel like that is the sort of person I wanted to be. Then we got goats. Now despite all of our best efforts, I seem to have goats on my porch frequently enough for it to not be nearly as alarming as it probably should be.

Our goats, Buttercream and Gertie, live the good life. Nothing is too good for our animals. Accordingly, they were recently given a brand new barn. The new barn has warming bulbs, a heated water bucket and a cozy interior.

In fact, it may be nicer than our first home. It offers everything the discerning goat could want. They also have acres of pasture. Acres. These goats literally have more grass than they could possibly graze.

They have shade and open space and some bona fide “forest.” There is a mineral block for a healthy treat. The vet visits regularly to check on hooves. So what do they do with all this luxury and largesse?

Why they scheme to escape every chance they get. Naturally. When on the lam, Buttercream looks even cuter (if that is even possible). I nag and scold her and she rolls her eyes. If a goat could “whatever” like a teenager, Buttercream most certainly would.

Her expression says we seem to be confusing her with the dogs and that she really couldn’t care less about being known as a “good girl.” She’s got places to go. Her tongue in cheek nicknames are Sour Cream when she’s being sassy and Butternut when she’s up to no good.

Still, we just adore her and her faithful sidekick, Gertie. It has been said that good fences make good neighbors and I think this is doubly true if your neighbors have no interest in visiting with your goats.

A high and tight fence is only a deterrent, however, and rarely a foolproof solution.

Buttercream fancies herself a porch goat. I’m sure she would be a living room goat if we were so inclined. So far she’s only made it as far as the front porch but I put nothing past her.

I think she’s acquired a taste for wicker. Gertie, more a “good girl,” often stands in the yard and yells at Buttercream. I’m not sure if she’s cajoling her to behave — or acting as a lookout.

Last Friday, I came home to our free-range goat enjoying the yard. BoyWonder, always a team player, dutifully put her back.

Fifteen minutes later, he left for the evening and found her out again. She seemed mildly bemused as he led her back, checking the fence for obvious breaks along the way. I bet he wasn’t fully out of the driveway when she escaped for the third time.

This time I had peeked to see how she was getting out. A stakeout of sorts. Don’t let anyone say my Friday nights aren’t glamorous. I watched as she deftly peeled the fence away from the gate post and slid out neat as you please.

When I burst out the back door in full “aha!” moment excitement, she seemed almost embarrassed to be caught. I did some quick work with twine (my Gram would be so proud) and secured the fence to the post.

Buttercream was thus forced to spend the rest of the evening in the comfort of her barn, poor dear. Thus confined she turned her attention to pushing open the barn doors to let the cold in. That became an obsession for the weekend.

Every single time I looked out at the barn the big doors were wide open. We are harboring the Houdini of the goat world. We also hung a thick red towel on the small side access door to the barn, to allow the goats to come and go while blocking the wind.

Buttercream enjoys sticking her head out and peering through the opening. The streaming red towel draped across her back giving her the appearance of a superhero awaiting her call to action. That, or a gap in the fence.

I like to think I was normal maybe four goats ago. Now I just spend a lot of time trying to reason with runaway goats.

If you visit, pay no mind to the lady (me) who is likely to be stomping around talking to herself. Also, please keep the gate closed, don’t lean on the fence, and don’t let the goats out. No matter what the goats tell you.