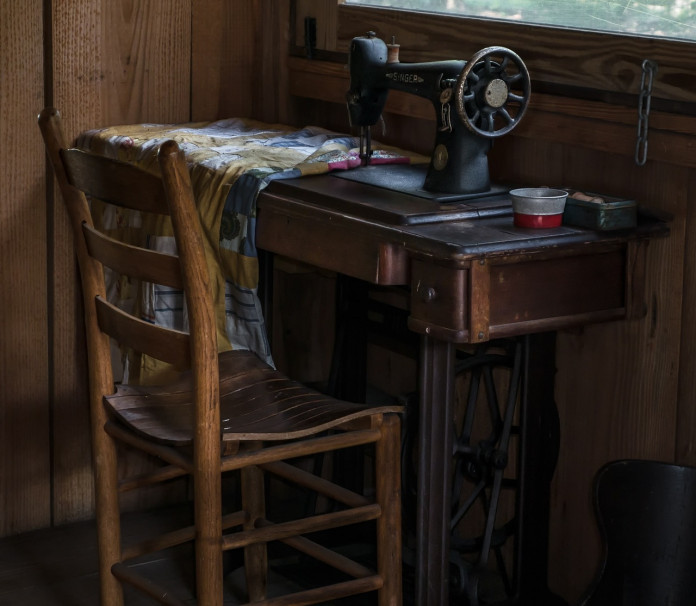 With fingers weary and worn, with eyelids heavy and red,

A woman sat in unwomanly rags, plying her needle and thread.

In poverty, hunger and dirt, and still with a voice of dolorous pitch,

She sang “The Song of the Shirt.”

When I was a kid, Mom had a treadle-type sewing machine that sat in front of an east-facing window at one end of the broad upstairs hallway of our farmhouse.

It was a Franklin, painted shiny black with lots of gold curlicues and nickel-plated accessories and she made many clothes for herself, my sister and my sister’s dolls.

Most farm wives (and many town wives as well) during the last half of the 19th century and first half of the 20th did the same thing.

Patterns of all the latest fashions were readily available and cheap, and material and thread cost less than buying clothes in a dress shop.

Until the 19th century all clothes, hats, shoes, harness and ships sails were sewed by hand — a slow, laborious process, as attested to by Thomas Hood’s poem.

Oh, inventors had tinkered with knitting and sewing machines off and on for decades, but they all tried to duplicate the motion of the human hand and none worked.

Then the European wars of the 1800s, and the subsequent need for thousands of uniforms for the armies and sails for the warring navies started some movement toward mechanization.

In 1830 a Frenchman, M. Thimmonier, patented a workable sewing machine and made uniforms for the French army. The Parisian tailors, following the example of the British Luddites, broke into his factory in 1841 and burned all the sewing machines — and they did it again in 1848 after he rebuilt.

In this country, a New Yorker named Walter Hunt developed a machine in the 1830s that made a lock-stitch and had an eye-pointed needle.

He never patented the idea however and lost out to Elias Howe as the father of the sewing machine.

Howe was born in 1819 on a barren Massachusetts farm and in his teens he apprenticed in a Lowell, Massachusetts, machine shop where they made textile machinery.

He later moved to Boston and worked in the shop of a scientific instrument maker, where he learned much about making intricate mechanisms. Howe’s problem was that all his needles had the eye at the center and he couldn’t make them work.

It’s unknown if he had heard of Hunt, but the idea came to him, reportedly in a dream, of putting the eye at the needle’s pointed end.

This solved the problem and Howe had a working sewing machine, but he couldn’t get any of the local garment makers to buy it, the tailors raised such a storm of protest. Howe finally sold a machine in England and was hired to keep it in order.

While he was there other men in the U.S. took his ideas and built machines that finally caught on.

One of these was Isaac Merritt Singer, a flamboyant promoter who had trained as a mechanic and had also been an actor and a theatrical manager.

Borrowing $40 to buy the materials, Singer built a successful machine in 1855 that featured the eye-pointed needle and lock-stitch plus improvements. He built and sold some machines in Boston before moving to New York City and starting a large sewing-machine factory.

A Singer machine in the hands of a trained operator could make 300 stitches per minute, while a skilled seamstress could do maybe 40 by hand. Howe’s machine was powered by turning a hand crank, while Singer introduced foot-treadle power so both hands could be used to guide the cloth.

Howe returned from England and began to sue for patent infringement. His rights were finally established in the courts in 1854 and he was awarded $25 per machine built thereafter.

His triumph was clouded however, due to the recent death of his wife and, although there were Howe sewing-machines made, Howe never owned a factory of his own.

Although in ill health, he organized a regiment during the Civil War, using much of his own money to equip it, and served as a private in its ranks.

Elias Howe died in Brooklyn in 1867. Although one would think Isaac Singer would be busy enough with his business interests, he was a great womanizer and had at least three wives, along with several paramours.

Singer was prolific, as well. It is said that he fathered twenty-four children to all his women. One of the paramours, claiming common law status as Singer’s wife, had him arrested for bigamy in 1862.

He got out of jail on bond and fled to England where he married a French woman, who left her husband for him. Singer lived in England until his death in 1875.

Another name important in sewing-machine development is that of Allen Benjamin Wilson, a contemporary of Howe and Singer. He invented a double-acting shuttle that made a stitch with each back and forth movement instead of just in one direction, as on Howe’s machine.

He also added a hook that grabbed the thread on the underside of the needle stroke and carried it around the loop of the stitch making it much stronger, and he developed an improved thread feeding mechanism.

Like most inventions of complex machines, no single individual can claim to have invented the complete sewing machine. Each person’s ideas were built upon and improved by others until there was a finished machine.

Until after World War II, the garment making industry in the United States thrived as a result of the efforts of such fascinating men as Howe and Singer. Today, it’s very difficult to find a piece of clothing in any store with the “Made in USA” label.