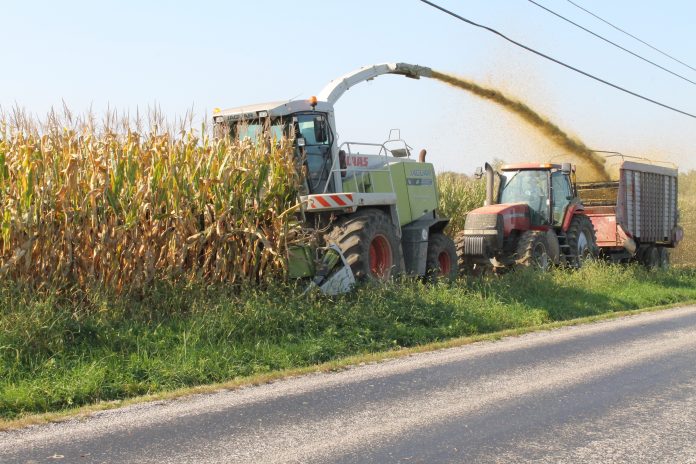 As we move closer to September and corn silage season, it is time to start estimating yields and if needed negotiating a price with neighboring grain farmers for the additional silage you will need.

Depending on where you are across the state, your corn may look close to normal or it may only be 6 feet tall when it tasseled. While many parts of the state have received rejuvenating rain falls over the last few weeks, many of the yield decisions for the corn crop were made earlier while the crop was under stress.

To conduct the yield estimate based on grain yield, you will need to estimate grain yield. There common methods for estimating grain yield early is the yield component method, used most often before black layer. There are several smartphone apps that make this method easier.

Step B) Multiply results of A by the number of ears

Step C) Divide results of B by 85, (85 is the fudge factor representing 85,000 kernels per bushel, the factor could be adjusted to 90 if kernels are small during a stressed year)

Walking the field yesterday, plants are only about 6 feet tall but following the yield component method, we found yields around 150 bushels to the acre. Less than average, but nowhere near as bad as we feared they might be. For best results, this process needs done a minimum of four times per field and by hybrid.

When determining corn silage price, there is often a range between what the value of the silage is as feed and value the seller could have gotten by harvesting the grain themselves and marketing it.

The July issue of Buckeye Dairy News states that the actual value of corn silage per ton is $43.19 with a predicted value of $73.02, making it considered a bargain feed. This is not the value a buyer would want to pay for standing corn though.

The standing corn must be harvested, fermented, and stored. The cost of these steps must be deducted from the value at feeding to arrive at an infield price. The average cost for custom harvesting corn silage including hauling and packing is $11 per ton.

Also, shrink should be factored into the price of the silage when purchasing it from the field. On average 10% of the of the material is lost via fermentation (shrink). Including the cost of harvest and shrink would reduce the standing corn value to proximately $28.71 per ton.

It is highly recommended that at least some or the trucks or wagons go across a scale to determine how many tons are harvest. You should have at least four weights to make an average for each truck. To the corn seller, the crop is worth the market price which is currently around $3 per bushel at harvest or $3.20 if held until in storage until January.

The commodity crop would have a slight discount of storage cost, drying and hauling to market. When the silage is harvested, the fodder is also removed which has a fertilizer value if left on the field increasing the value per ton over grain price.

Once a fair price for both parties is reached a written contract should be signed so that there is no question about payment timing or harvest field entrances.