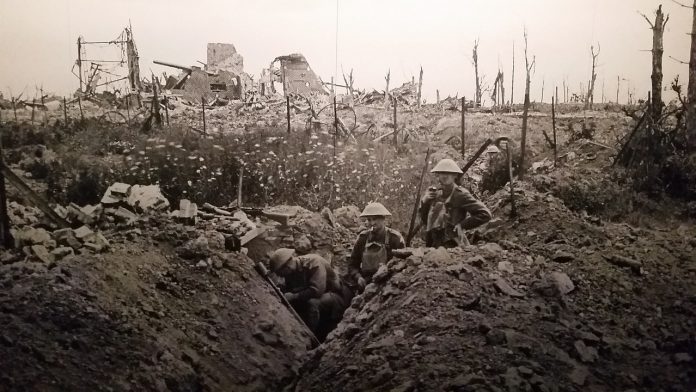 As this month marks the 100th anniversary of the armistice that ended the “war to end all wars,” I thought this story of “beating swords into plough shares” might be interesting.

Frenchman Louis Renault started to build cars in 1898 and by the time of the Great War was a successful automobile manufacturer. In 1916, Renault received a visit from a French Colonel of Artillery, J.E. Estienne, who had told the French high command, “Gentlemen, the victory in this war will belong to which of the two belligerents will be the first to place a gun of 75 [mm] on a vehicle able to be driven on all terrain.”

The visit seems to have inspired Renault, who with the help of his staff designed the famous little Renault M-17 (FT) tanks that were known as “Chars D’Assaut” or “chariots of assault.”

The M-17 (FT) was small, weighing about 7 tons and approximately 10 feet long, five high and five wide, with a crew of two, a gunner and a driver.

The driver sat in front with the gunner standing behind and above him in the small turret. Behind the gunner was the fuel tank, transmission and steering clutches, and then the cooling fan, which drew air through the crew compartment for a little ventilation (unless it contained poison gas when it was deadly).

Behind that were the radiator and a Renault four-cylinder engine that produced some 40 horsepower.

Armament was an 8mm Hotchkiss machine gun or a 37mm cannon in the turret, although near the end of the war, some were equipped with a short-barreled 75mm cannon.

France did begin experimenting with heavy tanks in the summer of 1916, and Estienne was promoted to brigadier general and appointed to oversee the program. Of course, the French Army brass, brought up on artillery barrages to soften, and then infantry bayonet assaults to break through an enemy line, with cavalry sabers to exploit that breakthrough, had little interest in tanks.

Estienne became convinced of the need for a fast and nimble light tank for reconnaissance and exploitation but made little progress due to the Army commanders looking upon tanks as being nothing but mobile artillery.

Finally, the Battle of Cambria in November 1917, where the British infantry and tanks successfully worked together for the first time, convinced the French high command to take tanks seriously and by August of 1918, the French Tank Corps consisted of 14,649 men, 800 heavy tanks, and about 3,700 Renault light tanks.

These machines fought in many battles, often manned by American Doughboys, during that last year of the war, not always with success, but as machines and armaments, tactics and means of communication improved, and tank crews and commanders gained experience the results improved as well.

Estienne received the Cravat of the Legion D’ Honneur and was promoted to major general as a reward for his efforts.

At the end of the war, French farmers returned to farms that had been occupied by German forces, fought over, dug up for the vast trench networks for which the Great War is famous and full of craters from the untold thousands of artillery rounds that had been fired by both sides.

Machinery had been destroyed or shipped back to Germany and both horse and manpower were scarce due to war losses. Tractors were badly wanted but were virtually nonexistent.

The French Army had, however, some 3,000 surplus Renault tanks on hand and someone had a bright idea.

French farmers were told, “Those little tractors that whipped the Hun will undo much of what the Hun has done. The tractors can be stripped of their armor and armament and with a few minor changes can be made serviceable for farm work.”

The plan was put into effect and the converted Renault ex-tanks were distributed to farmers and also used to tow barges on France’s canals and rivers.

The plan accomplished several things. It helped the nation’s farmers by providing much-needed power in a very short time.

I’ve been unable to find a photo of a converted M-17 (FT), and I’m sure they weren’t ideal for farm use. But in those days, almost all tractors were awkward, clumsy machines that were primarily used only for pulling heavy tillage implements, so the converted tanks probably did that kind of work OK.

The plan protected French industry as well. Instead of importing expensive tractors from the U.S. and elsewhere, it allowed manufacturers time to refurbish their often ruined factories and begin to produce their own tractors again.

Finally, by converting the “baby tanks” instead of scrapping them, the French government accomplished a remarkable feat of salvage. This meant a vast amount of money saved and gave a leg up to French farmers who knew it would take years to get their wasted and blasted fields back into anything like their pre-war production.

There was one other advantage that was spoken of at the time. In case of another conflict, the machines could be restored to their warlike equipage and be able to again do battle.

While there were some of the little tanks still in use by different combatants in World War II (the German Army used many captured Renault M-17 (FT) tanks for training purposes and patrolling rear areas), it’s not clear that any of these had been ex-agriculture conversions.

The Great War had been good to Louis Renault; at the war’s beginning his factory employed 7,500 employees and was making cars, trucks and engines for marine, industrial and aviation use.

By the time of the armistice in 1918, there were 26,000 employees cranking out, besides the above, tanks, armored cars, guns and ammunition. Renault was reputed to be the wealthiest man in France. History is fascinating.

I very much appreciate the condolences sent to me by many folks upon the recent loss of my lovely wife, Nancy.