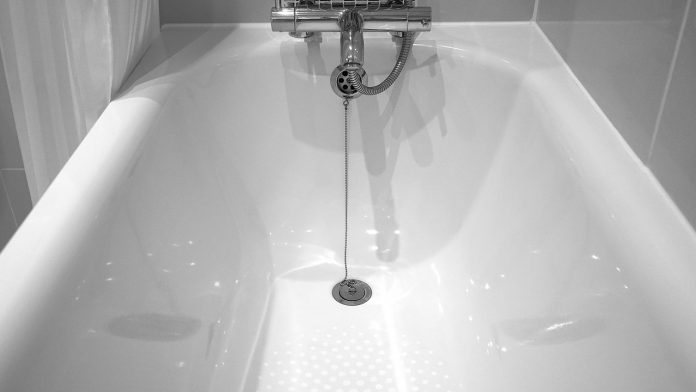 Dear readers, I am taking a poll — crowdsourcing, if you will, the best response to the following scenario: If you finally took apart the area under your tub to see if there was any mold and there was not (yay), but you found evidence that a mouse had been living in there, would you:

A.) Try to clean it out with bleach and set mouse traps in the basement while explaining that the mouse got in around old drain cuts that you believe you can take care of.

B.) Gut the entire room and start over with a claw foot type tub that no mouse can hide under undetected?

Obviously, B and C are the correct answers, so why is Mr. Wonderful so focused on A while I am convinced I have the hantavirus?

I got my medical degree from Google. I know things.

We have lived in this house for 24 years. We have renovated this bathroom three times. It is looking likely that we will be going for renovation number four very soon.

I’ve always given the advice that you should live in a house before you start renovating. I know the new way of flippers is to purchase and start knocking out walls and tearing things up and generally turning everything into an open floor plan before the ink is dried on the closing documents.

However, I find you need to live in a space to really learn your way around. A space will tell you what it needs.

Our bathroom is telling us it needs an exorcism.

When we looked at the house, it needed a lot of work. That is an understatement. But we knew what we were getting into.

One thing I noticed was that amidst all the debris, there was a beautiful clawfoot tub in the barn. I had visions of reinstalling it into the house to replace the truly horrific plastic jetted bathtub that had been built in. It was an abomination.

Unfortunately, by the time we took possession of the house, they had taken almost nothing of the trash and debris but the clawfoot tub in the barn had disappeared. Such is life.

We cleaned up the bathroom as best we could installed a new tile floor and some great wainscot and tried to make it look charming even though the jetted tub was just offensive. It only took a few years of startling the children with the loudest tub on earth to determine it had to go. We then went into an acrylic tub because it was the early 2000s, and they were all the rage.

Our acrylic tub cracked within — you guessed it — seven years. It was that tub leaking that led us to realize we had to gut the entire bathroom. I do not play around with mold or wet wood.

We went down past the plaster and down to an original tongue and groove floor. We even found the original linoleum which was kind of exciting. It has done an admirable job of protecting the wood underneath from the leaks. We actually had a layer of slimy water between the linoleum and our tile, but the wood beneath was pristine.

I like to say the house had defended herself against the interloping results of a cheap tub. Acrylic bathtubs are the work of Satan.

At that point, we went all out: a beautiful enamel over steel tub extra deep, new tile, new vanity, the works. I gazed at this bathroom with wonder and delight for a solid year. It is beautiful. If I do say so, a photo of this bathroom actually was lifted from a blog post and ended up on Pinterest. I have never been so flattered as to know that people actually pinned my bathroom design.

And again. So, imagine my surprise this fall when we realized in horror that the bathroom may need to be renovated again.

I get sick in the bathroom —  coughing, wheezing, watering eyes. This cannot be right. Hence the discovery of the aforementioned mouse house (condo?) under our tub. I am horrified. I am also trying to be reasonable. I know fire is overkill — but barely.

I don’t want to spend a lot on this. In my vision, we have $100 in a salvaged clawfoot tub and a couple hundred in the flooring and drains. They knock this out in a half hour on most home DIY shows, right?

Mr. Wonderful says that he should get to work on it, but I don’t think his heart is in it. The fourth time around it’s just hard to get excited about P-traps and grout. To be fair, that is barely enticing in the first time around.

It’s fair to say that our enthusiasm for this project — and Mother Nature — is definitely circling the drain.