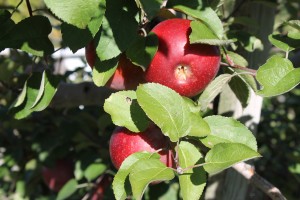 SALEM, Ohio — The apple harvest is coming to an end earlier than usual in Ohio with a reduced, but some say sweeter, supply.

Apple orchards are reporting that as little as 3 percent of the usual yield was harvested, while others reported as high as 80 percent.

And that means consumers can expect to pay a higher price for apples.

Diane Miller, an OSU Extension fruit tree specialist, said while Ohio apples are available at markets and grocery stores, consumer will likely find a higher price tag on the shelves.

“Apple crops in Indiana, Michigan and northern Ohio are smaller this year,” Miller said. “No one has a really heavy crop.”

Apple production in Ohio is expected to be down some 46 percent this year, said Bill Dodd, president of the Ohio Fruit Growers Marketing Association.

And growers in other states have also seen apple crop declines, he said.

“In Ohio, which is the ninth largest apple producer nationwide, we have apple growers who have experienced everything from a total crop loss to those who are experiencing crops at 90 percent or better, to everything in between,” Dodd said. “Things vary by location, individual farms and apple variety.”

Debbie Brant, of Brant Apple Orchard in Ashtabula County, said “this was not a good year” but she’s confident “next year will be better.”

Brant said the 80 degree weather in March and a double frost in April hit their apple orchard hard, resulting in only 3 percent of the apple harvest.

“The drought didn’t help the size, but it could have been a zero harvest,” said Brant.

Granville Orchard in Licking County is reporting that they are almost done with this year’s apple harvest. David Goss, owner of Granville Orchard, said that they lost 60 percent of the crop due to the weather conditions experienced this spring.

“We had fewer apples. It wasn’t a great year,” said Goss. “However, we consider ourselves lucky. Some orchards didn’t open at all this year. It was that week of hot weather which made them bloom and the frost that followed in the next month that did the damage.”

The Moore Orchard in Ottawa County had a more positive report to share. Owner Jim Moore said his orchard is producing an excellent crop of apples this year.

“Harvest is pretty good,” he said. “And when you consider the weather this spring, it’s a miracle that we are only a week ahead of time with the crop.”

Moore credits the crop to the dry weather, which helped produce great apples, and the protection the orchard gets due to its location to Lake Erie, which helped protect it from the spring weather.

“We are very fortunate,” said Moore. “It’s not a full crop, but better than what a lot of people have. We feel very lucky.”

Dan Simmons, co-owner of Peace Valley Orchards in Columbiana County, said the picking in the orchards was completed Oct. 11.

“It’s the earliest in memory we have ever had,” said Dan.

He said the apples started blooming April 12 and they usually bloom around May 2.

Simmons said the weather was difficult this spring, but Peace Valley Orchards used fans and misted water on the trees to help prevent hard freezes. He said there were three separate freezes that could have killed them, but with management they were able to prevent a lot of damage.

“If you would have asked me in March, I would have said it would be slim-to-none chance we would have a crop this year at all. I’m glad I was wrong.” said Simmons.

He said the orchard was able to produce 70-75 percent of what they usually do.

The declines will make this the lowest apple-producing season since 1988, Dodd said.

“As a result of the shortages around the country, apple prices have increased some 20 to 25 percent,” he said.

But those apples that have gone to harvest are expected to be more flavorful, thanks to hot temperatures in August, which helped sweeten the fruit, Miller said.

“The apples that survived should be sweeter and more flavorful. So people who want to get their apples from a farmers market or u-pick should do it soon. In a couple of weeks, the u-pick apples will be done,” said Miller.

How to make homemade fire starters