EAST LIVERPOOL, Ohio —
History tells us the Ohio River has had many impacts. It affected the lives of early settlers and provided a means of transportation for them.

However, it wasn’t until about 25 years ago that the Ohio River began to change farmers’ lives in northeastern Ohio and western Pennsylvania.

That is when the East Liverpool,  or as some call it “The River,” grain facility was built by D. W. Dickey & Son.
In 1999, the facility was sold to the Agland Co-op, where it continues to play an even bigger role in grain marketing.

“Farmers would be surprised to know how much of what they are producing makes it to China,” said Ralph Wince, grain marketer at the Canfield-based Agland Co-op.

He estimates that by having the river facility, many farmers are able to pocket an extra 6 or 7 cents per bushel for soybeans. This could mean an additional $70 per 1,000 bushel, which is the amount a semi-truck would normally hold.

Before the river and barge loading facility was created, farmers would have to drive to locations in western Ohio to market their soybeans, if they wanted to take advantage of any premiums that were available.

This has helped to make soybeans even more popular to area farmers because the additional revenue adds up as the acreage increases.

The river facility predominantly ships soybeans, Wince said, because there is a larger market overseas for soybeans. China depends on U.S. soybeans for its food supply.

The domestic market demands more corn than the Japanese market so a higher price is available here than across the ocean. The United States is dependent on domestic corn for the food supply, livestock feed and ethanol.

There will be eight more barges of soybeans shipped during the remainder of February and March.

Today, farmers from as far away as Forest County, Pa., — two and half hours away — drive to the Ohio River location to dump their loads of soybeans.

Agland exports soybeans from harvest to March. When the soybeans leave East Liverpool, Ohio, it takes between three or four weeks to get to Myrtle Grove, La. The port is located about an hour south of New Orleans, La., and is where Cenex Harvest States is located.

Here the soybeans will be transported to a ship and sailed to China. CHS delivers 1 million bushel of soybeans to China per day, according to Wince.

“Some people, even some farmers, just don’t realize that the soybeans and even some corn grown here in northeast Ohio are destined for China and Japan,” said Wince.

The day Farm and Dairy visited, approximately a mile of semi-trucks were lined up waiting to dump their soybeans.

As the loaded barge gets ready to head down the Ohio River, an empty barge makes its way to shore and begins docking to take its place. The one-man crew begins to tie the barge to the dock as the barge operator shuts down the motor.

As the trucks approach the facility, there is a scale that weighs the loaded trucks. After the trucks are weighed, they drive onto the dumping facility. The hatches are opened, and the soybeans dump into a pit. From the pit, the soybeans are then loaded into a grain bin.

Currently, the East Liverpool facility is able to dump between 7,000 and 8,000 bushels per hour from semi trucks.

After the trucks are emptied, the semi-trucks must pass over the scales one more time to be weighed again. They are issued a weight ticket that will total how many thousands of pounds of soybeans they hauled in. The driver must sign the weigh ticket and then heads on his way. 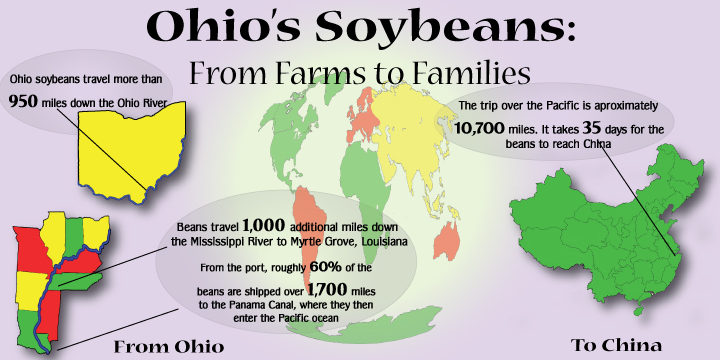 The soybeans have a much longer trip ahead of them, as they will eventually make their way to China.

After the trucks are unloaded, the soybeans enter a pit. The next step depends on where the facility is in loading the barge. If a barge is waiting and the bins have been emptied, then the soybeans are transported up the grain leg and onto a belt system that moves the beans along the grain leg into a chute that is directly loaded into the barge.

If there is no barge waiting or the bin already has soybeans in it, then the soybeans are stored in the bin. But before they get loaded, the soybeans are coated with mineral oil to retard dust. Agland Co-op uses approximately one gallon of mineral oil per 1,000 bushels of soybeans.

The barge has a top with several holes in it so that the shoot can be adjusted to the holes in order to load the barge equally.

But before the barge is loaded, a grain inspector from the Columbus Grain Inspection Inc., climbs onto the barge and walks over the barge, opening the different roof openings. He is checking to ensure there is no water that leaked in and that there is no grain or other materials left behind inside it.

After the grain inspector gives his go-ahead, the loading can begin.

It will take between four and five hours to load the barge from the facility.

In addition to individual farmers hauling grain into the facility, Agland also hauls grain from its New Philadelphia, Ohio, location.

The popularity of the facility has caused some delays for farmers in the past couple of years, so Agland Co-op is planning to expand the facility. There will be approximately $1 million in upgrades this summer to create faster unloading times for farmers. Instead of being able to dump 7,000 or 8,000 bushels of soybeans per hour, the upgrades will at least be able to double that amount.

The upgrades will include a new dumping area and facility so that farmers can get in and get out quicker. With the planned upgrades, the farmers of northeast Ohio and western Pennsylvania will spend less time waiting and more time hauling soybeans so that the world can be fed.