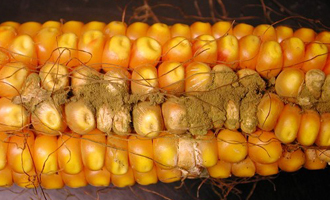 WOOSTER, Ohio — The ongoing drought afflicting much of Ohio has created conditions that are ripe for the development of a fungal disease corn growers in the Buckeye State typically don’t see — Aspergillus ear rot.

The concern is that drought-stressed corn is more susceptible to infection by Aspergillus flavus, an ear rot fungus that produces a very potent group of carcinogenic (cancer-causing) toxins called aflatoxins. Aflatoxins can be harmful for animals or humans if used in corn for grain and human food consumption, said Ohio State University Extension plant pathologist Pierce Paul.

What to look for

Already, the disease has been spotted in some corn in Indiana, which is experiencing severe and extreme drought over much of the state, so Ohio growers should start looking for signs of it in their cornfields, Paul said.

Growers can identify the disease by peeling back the husks and looking for a yellowish green or gray-green mold growing predominantly at the tip of the ear. This is largely because the fungus enters through the silk channel. Infection is also associated with insect or bird damage, which typically occurs at the tip of the ear, Paul said, so growers should look at ears in multiple locations throughout their fields, especially in areas that have insect or bird damage.

“Normally, aflatoxin contamination of corn is not a major issue in Ohio, but the dry conditions experienced across the state could lead to such a problem this year,” Paul said. “This is something that we don’t want to get into the food chain, period.”

Paul said the fungus can infect grain and produce aflatoxin under a wide range of conditions including temperatures between 54 and 108 degrees, kernel moisture between 15 and 25 percent, and relative humidity above 80 percent.

But, he cautioned, growers shouldn’t assume that if they find Aspergillus ear rot in their corn, that it means aflatoxin contamination is also present.

“There are no guarantees that moldy ears will be contaminated with aflatoxins,” he said. “And there is no guarantee that ears without visual signs of fungal infection will be free of aflatoxins, and that the amount of Aspergillus ear rot will provide an accurate measure of the levels of aflatoxin contamination.” The plant pathologist said the levels of ear rot development and toxin contamination depend on the strain of the fungus, with some members of the Aspergillus flavus group being capable of producing more or less toxins than others.

To be sure, growers should have their corn tested. Samples from suspect fields should be sent to an approved laboratory to determine whether aflatoxins are present and whether they exceed thresholds established by the U.S. Food and Drug Administration. 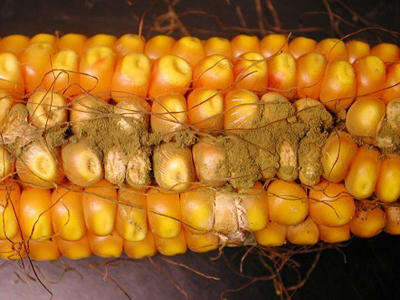 Ohio Beef Expo will be March 18-21 in Columbus