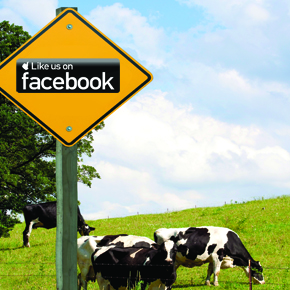 Today’s media is filled with megaphones and the Internet is a dangerous sea filled with terrible monsters. Farmers were falling victim to the seas, but recently they’ve changed their tactics.

Messaging is no longer a question of substance, like it used to be, but a boxing match that rewards the most absurd, bombastic, seething, political and outrageous claims. The Internet encourages a survival-of-the-fittest attitude, ensuring only the strongest talking points become “viral.” Unfortunately, we’ve devolved the Internet into a digital version of The Hunger Games.

For some industries, like entertainment and politics, the system works just fine.

Marketers and political cronies are highly trained agents in the use of all forms of media, including social media. Every move is cool, calculated and constructed in a manner that is aimed to please the most common denominator (as discovered by focus groups). If the message fails, it’s no problem because those in charge have dozens of configurations of the same, politically correct, buzz words at their disposal.

When politicians or entertainers stumble, however, it makes headlines because such displays of ineptitude are rarely experienced by the masses. Take Mitt Romney’s misspelling of America for example.

Marketers and politicians must be born with large, whale-like, lungs designed to take massive breaths then plunge into the dangerous seas of the blogosphere. It’s true. Most doctors can recognize a politician or marketer from birth. It so happens that many come from the womb discussing the virtues of using “climate change” instead of “global warming.”

But, the times are changing just a bit. Now, it’s not only about volume, but stamina and consistency. The most successful bloggers, writers and activists are not only loud with their message but consistent in its delivery. In other words, to survive in a place like the Internet, you must swim strong and keep swimming, otherwise you’ll drown.

And if anybody knows about stamina and consistency, it’s a farmer.

The social side of farming

Once the Internet became an apparent virtual soapbox, many industries put their foot in the door. Activists of all kinds use the Internet to spread their messages, whether they support democracy, equal rights or a grandmother who was bullied on a school bus.

Groups like PETA and The Humane Society of America, were quick to adapt to new ways of communicating. They hired their whale-lunged, public relations and marketing gurus to communicate the so-called atrocities committed by the world’s food producers. It worked.

Over the past several years the conversation has largely been one-sided, since PETA began utilizing viral videos, blogging and social media to strike out. Food producers responded, but their replies were drowned out in a tide of bad press and terrible misconceptions and misunderstandings, but things are beginning to change.

Farmers were at a huge disadvantage, but now food producers are now fighting back with social media and they’re rallying the troops. The OFBF recently held a blogging workshop for farmers and aggies. The workshop was a day long event to help educate farmers about the use of social media and how it can benefit the farming and ranching community and consumers.