ABOVE: The Dekalb 100th anniversary bike, created by Paul Jr. Designs of Discovery Channel’s American Chopper: Senior v. Junior, will be sold via an Internet auction to benefit the American Red Cross.

(Scroll to the bottom to see a photo of the Beck’s Hybrid custom-built reverse trike, with two wheels in front and one in the rear, complete with a front that mimicks a combine corn head.)

LONDON, Ohio — There were three machines at this year’s Farm Science Review that definitely had people talking — and you can’t use them in the field.

Showing the farm show gawkers that new chrome can be just as exciting as new paint, three custom-built motorcycles drew a crowd at the Beck’s Hybrids and DeKalb exhibits at the Review.

DeKalb commissioned Paul Teutul Jr., part of the father/son team made famous in the Discovery Channel’s American Chopper reality TV show, to create a custom-built bike for its 100th anniversary.

An online auction for the bike will begin in January, and the winner will receive the chopper at the 2012 Farm Progress Show in Iowa. All proceeds generated from the online auction will be donated to the American Red Cross.

Beck’s Hybrids is celebrating its 75th anniversary with not just one, but two, choppers built by Paul Teutul Sr.

One is a unique “reverse trike” motorcycle, meaning there are two tires in the front, and one in the rear. According to Teutul, CEO of Orange County Choppers, it’s the first reverse trike motorcycle in his company has ever created.

“It was a challenge that we just couldn’t turn down,” he said.

The custom-built chopper features an American flag with the saying “God Bless the American Farmer,” on the gas tank, along with an image of a two-row horse-drawn planter, which is how the first Beck’s Superior Hybrids seed was planted. The handle bar grips resemble an ear of corn and the side mirrors resemble the leaf of a corn plant. Driving on Hoosier tires, the wheels are made to resemble a planter plate.

The DeKalb bike was unveiled in August at the Farm Progress Show in Iowa, and made stops at other farm shows like Farm Science Review. It will also be featured in the DeKalb exhibits at the National Farm Machinery Show in Louisville, Ky., in February, as well as the Commodity Classic in Nashville, Tenn., in March.

Jason Hoag, DeKalb marketing manager, said the Red Cross seemed a match to receive the donations from the chopper.

“An agreement with this organization seemed very fitting, as we are both strongly rooted in the support of American communities, and dedicated to providing food and resources for people nationwide and abroad,” Hoag said.

Since the reveal in July, the Beck’s Hybrid bikes have toured the Midwest and will continue to hit the road to field events and trade shows, ending with the National Farm Machinery Show in Louisville in February. A drawing will be held Feb. 22 for the bike, and the winner will be announced at Commodity Classic March 1-3.

Donations are being accepted at all events with proceeds going to We Care for Orphans, and limited edition Orange County Choppers and Beck’s Hybrids T-shirts are also available, with profits going to the charity.

The Dekalb 100th anniversary bike episode will air on the Discovery Channel TV show American Chopper Oct. 1 and Nov. 7, and the Beck’s Hybrids reverse trike below will be featured Sept. 26 and Oct. 3.

Founded in 1912 as the DeKalb County Soil Improvement Association, DeKalb is now part of the Monsanto Company. Beck’s Hybrids is a family-owned and operated seed company that serves farmers in Indiana, Illinois, Ohio, Michigan and Kentucky.

* * *
The reverse trike below will be featured on the Discovery Channel TV show American Chopper
Sept. 26 and Oct. 3. 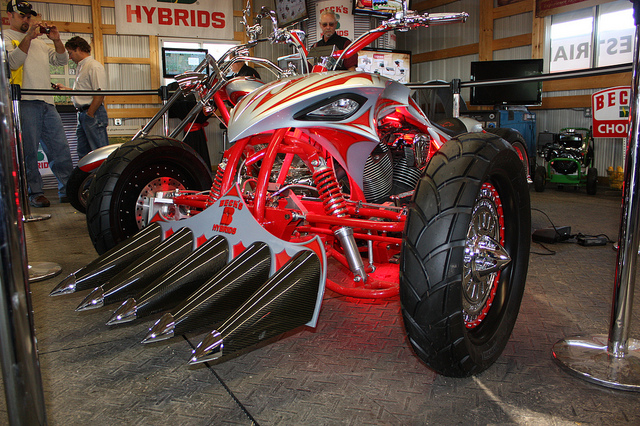