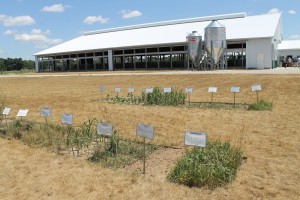 (Part one of a two-part series)
WOOSTER, Ohio — The crops on Bill Richards’ Pickaway County farm show the signs of drought and heat. The corn is only shoulder to head high and the unirrigated portion is worse.

He expects to harvest between 60 to 115 bushels of corn per acre — depending on the field. It’s about half of what he would harvest in a normal year.

“I’m sitting here in the middle of a terrible crop right now,” he said.

And he’s not alone. It was the worst nationwide drought since 1956, damaging crops across the west and Midwest and into much of Ohio. July was the hottest month on record, with back-to-back days in the 90s, and March was the warmest March recorded — nearly 9 degrees warmer than the average of the 20th century — according to the National Weather Service Forecast.

Last year, it was the opposite — record rainfall in Ohio, severe drought in Texas and the lower Midwest, and an unusually mild winter.

It’s enough to make a person wonder. Is it just some crazy weather patterns? Maybe El Nino or La Nina? Or could it be the result of a changing climate?

Richards and his family farm about 3,000 acres of corn and soybeans. He served as chief of the nation’s of Soil Conservation Service from 1990-1993, and served on a U.S. Department of Agriculture taskforce to study climate change, along with researchers from land grant universities.

What they found is that climate change is real, and that temperatures would rise, along with variability in the weather, but that agriculture would adapt.

He’s cautious about making assumptions, but keenly aware of the concerns farmers and researchers face — especially in light of new evidence the climate is changing.

“I will agree 100 percent that we need a whole lot of research and not yet spent on the solutions, because we don’t know what the problems are,” he said.

Roger Wise, president of Ohio Farmers Union, farms about 800 acres of mostly no-till in Sandusky County. He said the “evidence is very clear” that climate change is happening.

He’s not sure if this year’s drought and heat is a result, but what he is sure of, is a lot of unusual and extreme weather.

“I wouldn’t say it (was) about climate change, but I know that this year has been an unusual year,” he said. “It seems that we have more and more years that are unusual.”

In addition to new records in weather, he points to the way seed engineers continue to develop new hybrids and varieties to tolerate new weather conditions.

And, he’s seeing a change in the growing season and the Corn Belt move further north, while the southern states closest to the equator suffer warmer and more unpredictable weather.

“Some who say that it will pass, I think are shortsighted,” he said. “All kinds of weather issues are cropping up and I think that we would be really irresponsible to just say that it’s a natural event and let it go.”

Andrew Walmsley, director of congressional relations for the American Farm Bureau Federation, declined to comment on whether this year’s extreme heat and drought might be part of a changing climate, but called it “a very difficult year.”

“It’s a very devastating year from that standpoint, but we’ve had droughts before and extreme weather before,” he said.

The organization is opposed to mandatory climate change regulations, he said, and anything that would “hamper farmers’ ability to produce.” It stood against cap and trade legislation in 2008 that would have created a system of “caps” or limits on carbon emissions, and provided farmers and businesses with credits they could sell, for using carbon-efficient practices.

But Walmsley said Farm Bureau is seeing the same weather patterns as others — they just aren’t sure what’s to blame.

“I think we would agree that the climate is changing,” he said. “It’s always in flux. … I don’t think that we agree that it’s potentially a man-made issue.”

According to a fact sheet by Michigan State University Extension, which studies climate change in depth, agriculture contributed about 7 percent of human-based greenhouse gas emissions in the United States, in 2008. Tillage is accounted for the release of 40 to 60 percent of soil carbon.

The same report says the Earth’s average temperature has risen about one to one-and-a-half degrees over the past century. Although it may seem insignificant, researchers say it can be consequential — leading to shifts in the patterns and severity of rainfall and snow, droughts, cloudiness, humidity and length of growing season.

“Unless somebody changes the law of physics, the atmosphere is going to warm,” said Perry Samson, a University of Michigan professor of atmosphere, during a climate change workshop in July.

Samson said there are natural fluctuations in weather that “just happen,” but that the trends do point toward a changing climate.

He expects the nation will experience an increase in deadly heat waves, more rainfall in shorter bursts, and more tornadoes and hurricanes as a result of a warmer ocean temperature.

And he predicts it will take the extreme weather events, like those experienced this year, to awaken society.

“We as humans don’t change until something awful happens,” he said.

“As far as scientists can calculate, this is perhaps the highest concentration of CO2 since the very earliest days of the planet,” he said.

And it appears he’s right. According to a 2007 report from the Intergovernmental Panel on Climate Change, carbon dioxide and methane emissions have more than doubled over the past 200 years.

But Logan says he understands why climate change still has some doubters.

“I don’t blame them,” he said. “There is a lot of misinformation and a lot of it is intentionally marketed to those people.”

Next week: Climate change and agriculture: What can farmers do