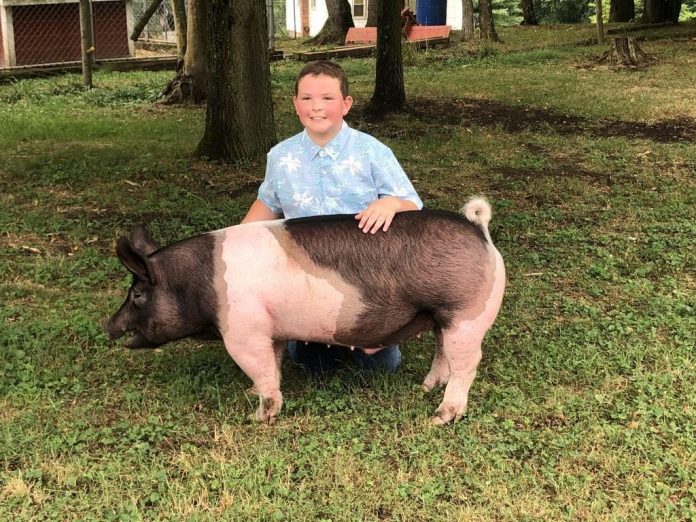 This was Tyler Beadnell’s third year showing a pig for 4-H, at the Columbiana County Junior Fair. Usually his dad, Toby, is there ringside watching him. He’s a big help to Tyler as he raises his hog for the fair.

But this year was different. Tyler’s dad was diagnosed in May with stage four melanoma. It spread into his skull, bone marrow, spine, spleen and neck. He’s been receiving treatment in Cleveland. He couldn’t be there to watch the show.

“He said ‘Mom, it wasn’t the same. I saw you, but Dad’s usually right there beside you,’” said Tina Beadnell, Tyler’s mother.

His father was on his mind as he walked back into the ring for the livestock auction Aug. 8. It was announced before bidding began for Tyler’s 267-pound hog that he wanted to donate the proceeds back to his parents to help with his father’s medical bills.

As the bidding started, Tyler was overcome with emotion, but he held it together. The hog initially sold for $50 a pound.

Tyler walked out of the ring, but was quickly ushered back in after the family who bought it donated it back to be sold again.

Then it happened again. And again. It was sold five times for a total of about $26,000. By the last round of bidding, Tyler had a smile on his face.

“Words can’t express how proud we are of him and of the community to come together,” Tina Beadnell said.