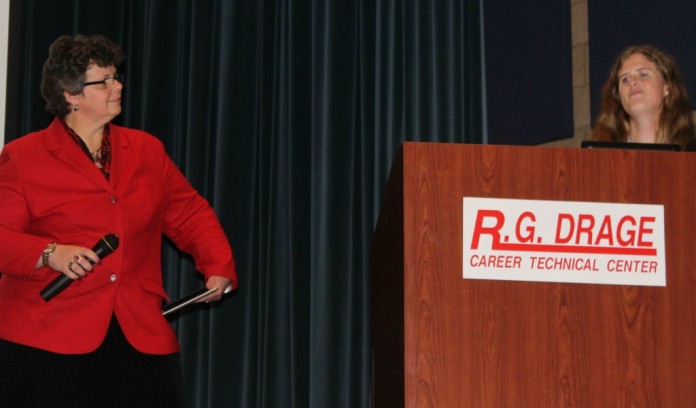 MASSILLON, Ohio — Women are not holding back, they are speaking out. They are an important part of agriculture and want to know all they can about the business.

Women from across northeast Ohio and beyond gathered for the East Ohio Women in Agriculture Conference held in Massillon April 1.

Close to 150 women gathered for the third annual conference, which offered a chance for networking and farm business education.

The theme throughout the day was growing confidence and communication.

The day started with Kim Davis of Carroll County talking to the group about overcoming adversity and having the confidence to keep moving.

She is now a Nationwide Insurance agency owner, but she has also beat ovarian cancer while raising her three children.

Davis urged the women not to listen to critics.

“Just get on with the job that needs to be done,” Davis said.

Davis also encouraged the women to work together. She said that women are all in the same boat and by working together, everyone can get farther.

Life will have its ups and downs, she admitted, but by getting through the down times, there will be more good times.

“No matter the storm, when you are with God, there’s always a rainbow waiting,” Davis said.

Dr. Roger Rennekamp, associate dean and new director of Ohio State University Extension, addressed the women in the afternoon with a clear message: Communicate about agriculture.

“Don’t be bashful. Talk about the work you do,” said Rennekamp.

Everyone has the responsibility to talk about the role of agriculture in our world, he added.

“Talk about the healthy foods you create,” he said.

The Extension service is unique, he added, because it touches the food system from one end to another and it’s purpose is to grow and support Ohio’s food system.

Sereana Howard Dresbach and her daughter, Megan Dresbach, served as keynote speakers, discussing how to grow confidence, connections and the next generation in agriculture.

Megan talked about how her dad let her start driving a tractor at age 12, and she developed self-confidence through that task and other farm responsibilities.

Eventually, she was able to develop her own role in the farm business by her late teens.

She urged the group to develop their confidence level and be strong.

“Let’s use our backbone to protect agriculture.”

Sereana Dresbach talked about how important communication is in a farming operation, not just for business but between generations.

She said each generation communicates differently, but it’s necessary to find a way to communicate that everyone understands.

Sereana said every generation has it’s challenges when it comes to farming and trying to do it together. However, everyone can learn from each other.

“Have the facts, be courteous, don’t be stubborn and don’t be arrogant,” Sereana said.

Sereana and Megan both discussed networking and how important it is to make connections, even though it can be stressful to take the time to attend farm meetings.

Sereana said she has often heard the phrase, “when the tractor isn’t running, money isn’t being made.” But more can be lost than just money if meetings aren’t attended, she added.

Megan agreed, adding the connection made at the meeting might be why the business is able to keep running in the future. Getting off the farm gives farmers the chance to talk about farming, dispel rumors and to correct the facts that might be construed as true, if a farmer isn’t there to make their voice heard.

“If ag isn’t on the table, then it’s on the menu,” said Sereana.

She said that even if agriculture isn’t supposed to be discussed at a meeting, it’s a good idea to go.

Sereana said she urges all women to invest time in building communication lines — it will help agriculture grow in the end.

She added that it takes confidence to follow dreams and that is something everyone needs to do.

“Communication is so important. Have confidence in whatever you do. Have the facts and pay it forward when you can,” said Sereana as she talked about the lessons she has tried to instill in her three children.

The conference also offered lessons on finance, livestock and lessons for dealing with family issues and time management.

One session called, “An Unhappy Couple: Why Business and Personal Finances Should Never Be Together,” provided some strategies for effective record keeping.

Women attending the session learned how keeping the finances separate could lessen liability in the event of a lawsuit and can help keep the Internal Revenue Service happy.

The attendees learned that separating the two can promote a professional image, lessen stress during tax season, establish a credit profile for the business and help when transferring or attempting to sell the business.

Abbe Turner, of Lucky Penny Creamery, presented the session called, “Many Eggs, Many Baskets,” and talked about starting her farming enterprise with very little money and suffering through the economic collapse in 2008.

She has built a creamery where she makes goat, sheep and cow cheese with no bank loans. She has used investors and grants to develop her business over the years. She has also used private fundraising internet sites.

Turner explained that she couldn’t purchase the brand new equipment she wanted many times but she found a way to purchase equipment such as her vat where she makes her cheese.

“Sometimes the joy and gifts are in the journey,” said Turner.

There was no doubt, the conference was deemed a success. Emily Adams, Ohio State University Extension educator and one of the conference organizers, said they are already working on next year’s event.