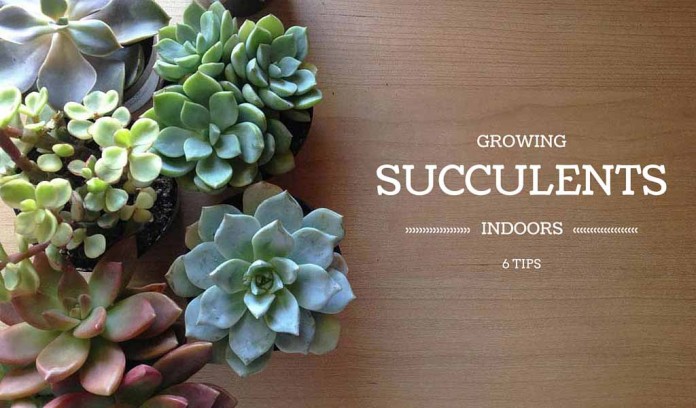 Succulents are undoubtedly growing in popularity. Succulents come in dozens of varieties, boasting different colors and shapes that can be mixed and matched to create a centerpiece or other decorations in the home. If you’re new to gardening or have had bad luck with houseplants in the past, try your hand at caring for succulents indoors.

Succulents are plants that have thick, fleshy, water-storing leaves. They’re xeric, meaning they require only a small amount of moisture to survive. Botanists include cacti in the group name succulents. Succulents are native to hot, arid environments, and are found throughout the world. Cacti, on the other hand, are native to the Americas.

Succulents are grown outdoors but are brought indoors during the winter months. It’s possible to grow succulents indoors year-round, though.

You may be familiar with some types of succulents, like aloe vera, jade and snake plant. The University of Florida’s Institute of Food and Agricultural Sciences has information about various succulents, including:

While succulents can also be placed outdoors during the growing season, keep them indoors in a bright, sunny location, like a south-facing or west-facing window.

Most succulents thrive if the relative humidity of the house is between 10 and 30 percent. Keep succulents away from drafty locations.

Rely on natural lighting if possible when growing succulents indoors.

Plant succulents in well-draining, sandy soil. Cornell Cooperative Extension suggests planting succulents in two parts garden soil, two parts sharp builders soil and one part peat. Or, you can use a combination of one part potting soil and one part coarse sand, as recommended by Minnesota State University Extension. Soil that doesn’t drain well may contribute to root and stem rot.

Succulents don’t require as much water as some other houseplants.

Water sparingly. Allow the soil to dry out completely before watering succulents. Allow water to drain out, then discard the excess water. If you water succulents too much, the stems and roots may rot and the leaves will drop. Succulent leaves will wilt if you haven’t watered enough.

Avoid watering in frequent, small amounts. This can affect growth by making plants sickly and by causing roots to become weak and shallow. Also, be careful not to water too much during winter, which is the dormant period for succulents.

During the growing season, fertilize succulents once or twice a month.