SHREVE, Ohio — Farmers often dream about the day a son or daughter comes of age to start helping out on the farm, and one day — just maybe — carry the farm into the next generation.

For Tom and Kelly Esselburn, who operate a beef and grain farm in southwestern Wayne County, the chances of that happening are at least five-fold.

Each of their five children (four adults), helps on the farm to some degree, and has an ag-related career or interest.

Chris Esselburn, 30, of Elba, New York, is following in his father’s footsteps as a territory business manager for Zoetis — previously known as Pfizer.

Nathan, 28, is a certified public accountant; Katie, 26, is a dairy nutritionist with Purina Animal Nutrition; Justin, 25, is an agronomist with the Loudonville Farmer’s Equity; and Andrea, 12, is still undecided — but leaning toward becoming a livestock judge.

The men of the family share another bond: Tom, Chris, Nathan and Justin each graduated from Texas A & M (known as Aggies), where they were also members of the Corps of Cadet program. In addition, Chris served in the U.S. Marine Corps Reserve in Iraq, during Operation Iraqi Freedom.

Growing up on the farm and serving in the military helped prepare them for their careers and for farm life.

“There are a lot of people who romanticize the idea of what farming is and these kids have no illusions,” Kelly said. “They knew going into their careers that it was going to be early mornings and late nights if they got involved in production agriculture.”

The military training taught them discipline and how to make good decisions, Tom said.

Today, the day jobs keep the younger generation of Esselburns on the move, but they’re each still involved with the home farm in some way throughout the year.

Tom and Kelly started the farm in 1986, when they purchased an old dairy and turned it into a beef and crop operation. Both grew up on dairy farms and met each other through 4-H, competing together as dairy judges on the local judging team.

But they decided to start a beef farm, partly because Tom held a job off the farm working in the feed business, and soon after, for Pfizer. They figured the beef cattle would be less demanding than milk cows — which turned out to be true.

But they were also in for a few lessons about how beef cattle differ from dairy, in terms of behavior and performance.

“We thought we would treat them (beef) like Holsteins because both of us came off dairy farms and we figured it was a bovine — it acts the same way,” Kelly said.

Some of their first cattle had never been around people, and the adjustment to being penned up in a barn was huge.

“We kid about this (now),” Kelly said. “We say we worked our first group of cattle and we didn’t kill each other and the calves didn’t kill us.”

From that point forward, the Esselburns improved their barns and made adjustments to the feeding and handling equipment, which made the farm more efficient and safer for handling cattle.

Today, they use automated feeders and mixed rations, modern pens and concrete walkways and floors, and finish about 100 head of cattle a year.

They also keep about 25 brood cows and are starting to put together some show cattle for sale.

The Esselburns had only two infant children when they started the farm, but that quickly changed, to the point where everyone was helping do something — from feeding and caring for the cattle to planting and harvesting crops.

Each of the Esselburns grew up showing cattle through 4-H and were active in their local club, Clinton Lads ‘n Lassies. Tom and Kelly still serve as advisers and Andrea still shows both steers and heifers.

The Esselburns recently remodeled one of their barns to make it more efficient for handling show cattle, and to make it safer for younger workers, like Andrea.

Change is a constant at the farm — where new ideas and concepts are always being considered and tested. Tom said the farm has experimented with different breeds of beef, different feeding and marketing strategies, all depending on the year and what’s trending.

“Farming is so dynamic,” he said. “You can’t say that you’re going to do the same thing this year and next year and the same way you did it three years forward — it’s going to change.”

Many of the changes, at least in recent years, have come from their children.

With so much talent now in the family — from an agronomist to an accountant and nutritionist — there’s plenty of ideas. And for the most part, Tom and Kelly welcome those ideas.

“You’ve got to look at the next generation and some of their ideas,” Tom said. “It doesn’t mean you have to accept them without challenge, but you’ve got to let them have a chance to come up with ideas.

“And I think they respect the fact that we’ve already been through some of those wars and we can see what works and what doesn’t.”

But, as Tom also points out, old ideas are sometimes worth reconsidering.

“Maybe something didn’t work before, but now there’s a reason that it will,” he said.

In addition to cattle, they farm a little more than 200 acres of corn and the same amount of soybeans, and about 50 acres of wheat, all under the name of Esselburn Grain & Cattle. They also grow cover crops, like rye and oats for oatlage.

No one has a set schedule, but with so many family members, there’s always someone around to do what needs done. The busiest time is during planting and harvest, and whenever new calves arrive or cattle are about to be shipped.

Justin tends to specialize in field work and Katie is more into the cattle — but each can pretty much do the other’s job, and Kelly can handle and drive most of the farm equipment, as needed.

The farm is entirely run by family, but Tom said there are times when they do rely on custom operators to harvest or plant.

Depending on the year and the situation, hiring the work done can make a lot more sense and it also frees the family up to spend more time with their day jobs.

But Kelly said they still enjoy working on their own farm, and that for Tom, “he enjoys the farming” because “it’s his relaxation.”

And for their children — you could say the farm is their foundation.

“I wouldn’t be in the job that I am without growing up on a farm,” Katie said.

She said her farm experience helped her in college, and that as a dairy nutritionist and farmer, she now has “the best of both worlds,” and gets to “put (her) degree to use every day.”

Chris said the farm life taught him his work ethic, and how to get things done every day. And the Marine Corps instilled in him the Corps values of honor, courage and commitment.

“I learned to be a self-starter and to work hard to get the job done,” he said.

Tom said the past few years have been good for farmers, with an “unprecedented run” in the markets. But he tries to keep an even keel, knowing that with farming, “anything that goes up, has to go down.” 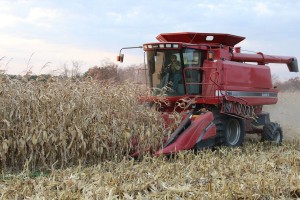 The Esselburns have a lot of options for the future, and plenty of time to think about what that will look like. With an agronomist and nutritionist in the family, they’re open to the possibility of expanding the beef and the acreage.

As Katie puts it, she and her brothers are watching “what kinds of emerging trends there are,” and “shaping the farm around those trends.”

The farm is set up so that they can eventually buy into it. And it’s surrounded by a farming community that includes many of Tom’s relatives and farms that have been in families for generations.

The Esselburns wouldn’t have it any other way.

“You’re so close to the earth with what it is that we do out here,” Kelly said.