SALEM, Ohio —  A large group of scientists and 13 federal government agencies warned of the dire consequences of climate change in a new report released May 6 by the National Climate Assessment.

The report, pieced together by a team of more than 300 experts and a 60-member federal advisory committee, warns that agriculture and human health in general will all suffer from climate change by about 2050 and beyond, if global carbon and greenhouse gas emissions are not brought into check.

“Some areas are already experiencing climate-related disruptions, particularly due to extreme weather events,” according to the report.

While some U.S. regions and some types of agricultural production will be resilient to climate change over the next 25 years or so, others will “increasingly suffer from stresses due to extreme heat, drought, disease, and heavy downpours,” the report says.

“From mid-century on, climate change is projected to have more negative impacts on crops and livestock across the country — a trend that could diminish the security of our food supply,” the report continues.

The average temperature for the United States has increased by 1.3-1.9 degrees since 1895, with most of the increase occurring since 1970. The most recent decade was the hottest on record, and 2012 was the nation’s hottest year on record.

“The National Climate Assessment confirms that climate change is affecting every region of the country and critical sectors of the economy like agriculture,” said U.S. Secretary of Agriculture Tom Vilsack, in a prepared statement. “This assessment provides an unprecedented look at how the changing climate and extreme weather impact rural America.”

For the Midwest, which includes Ohio, Indiana and Michigan, the report warns of extreme heat, heavy downpours and flooding.

In the short-term, longer growing seasons and higher levels of carbon dioxide may increase yields of some crops, although the long-term effects are expected “to decrease agricultural productivity.” 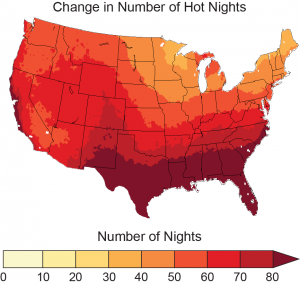 The Great Lakes will also suffer, with changes in “the range and distribution of certain fish species, increased invasive species and harmful blooms of algae and declining beach health,” according to the report.

The Northeast, which includes Pennsylvania, West Virginia and New York, will suffer similar consequences, as well as a rising sea level. Coastal and river flooding are expected to increase.

Some 64 million people are estimated to live in the northeastern states. The report says they may adapt at first, but eventually, their ability to adapt “could be overwhelmed” by changes to the climate.

The agriculture chapter of the report says that in addition to higher temperatures and downpours, “climate disruptions” will also cause declines in crop and livestock production due to weeds, diseases, insect pests and other consequences of climate change.

The ag chapter also says that climate change may jeopardize the future of food security in the United States and globally, and the ability to feed the 9 billion people estimated to inhabit the earth by 2050.

The complete report is more than 800 pages long, and has brought renewed attention to the issue of climate change.
Taking action. But the biggest question, arguably, is what should be done.

The report calls for “aggressive and sustained” greenhouse gas reductions, along with a “substantial decarbonization” of the global economy, that would include a “fundamental transformation of the global energy system.”

That “transformation,” according to the report, could include “putting a price (tax) on emissions, setting regulations and standards for activities that cause emissions,” including cap-and-trade programs that establish markets for trading emissions permits.

Andrew Walmsley, director of congressional relations for American Farm Bureau, said “a lot of (the report) is based on science and a lot of it is an important document for the administration to use,” to justify regulations — both current and new regulations that will soon be proposed.

If another cap-and-trade bill is introduced, it will not be the first. The American Farm Bureau Federation rallied against cap-and-trade bills in 2009 and 2010, warning lawmakers not to “cap the future” of American agriculture with what the organization considered burdensome regulations and taxes on emissions.

Walmsley said in his opinion, “you’d be foolhearted to say that the climate isn’t changing.”

But at the same time, he said rural America depends on having the tools it needs to produce food and energy.

“Having tools to innovate is much more important and useful than being straddled with regulations that merely regulate carbon emissions without really having a global impact,” he said.

The National Corn Growers Association used the climate report to urge President Obama to renew his support for the Renewable Fuel Standard for corn-based ethanol. The Obama Administration has recently proposed a reduction in the mandatory amount of ethanol blended into gasoline.

According to NCGA, the ethanol reduction would lead to greater dependency on oil and “increase carbon pollution” by an estimated 28.2 million metric tons in 2014.

Washington media that he did not want to get into a debate over the science.

However, he warned against proposals to address climate change, that would “kill jobs in America.”

It is unclear what policy actions the climate report may be used for, but it has already added some fire to what many are calling the “war on coal” against coal producing states.

Senate Minority Leader Mitch McConnell, R-Ky., tried unsuccessfully May 7 to push for legislation he said would protect coal miners and their families from the “anti-coal jobs carbon regulations” of the U.S. EPA.

In a released statement, McConnell said his proposal would have halted the Obama Administration from moving forward with new regulations on coal-fired power plants, until the technology required to comply with the regulations is commercially available.

His proposal was blocked by Senate Democrats, who control the majority in the Senate.

• The U.S. average temperature has increased by 1.3-1.9 degrees since 1895, and most of this increase has occurred since 1970. The most recent decade was the nation’s and the world’s hottest on record, and 2012 was the hottest year on record in the continental United States.

• Temperatures are projected to rise another 2-4 degrees in most areas of the United States over the next few decades.

• The frost-free season is projected to lengthen across much of the nation. This could lengthen the growing season for farmers and allow more crop rotations, one of the advantages of a warmer climate.

• The annual maximum number of consecutive dry days (less than 0.01 inches of rain) is projected to increase, especially in the western and southern parts of the nation, negatively affecting crop and animal production. Dryer days will increase evaporation and add stress to limited water resources, affecting irrigation and other water uses.

• “Hot nights” are projected to increase throughout the nation. These are defined as nights with a minimum temperature higher than 98 percent of the minimum temperatures between 1971 and 2000. High nighttime temperatures can reduce grain yields and increase stress on animals, resulting in reduced rates of meat, milk and egg production.

• Carbon dioxide accounted for 84 percent of total U.S. greenhouse gas emissions in 2011. In the same year, 41 percent of U.S. carbon dioxide emissions were attributable to liquid fuels (petroleum), followed closely by solid fuels (principally coal in electric generation), and to a lesser extent by natural gas. Electric power generation (coal and gas) and transportation (petroleum) are the sectors predominantly responsible.