SALEM, Ohio — The Ohio Department of Natural Resources issued 38 new permits for horizontal wells in March, a five-permit drop from February, but still more than the 32 issued in the state in January.

The county with the highest number of new permits issued remained Monroe County, with nine. That number, however, is down from the 17 issued to sites in the county in February. Eight of the nine new permits were issued to Antero Resources in Seneca Township, where drilling has already begun. The remaining new permit was issued to Eclipse Resources in Switzerland Township. 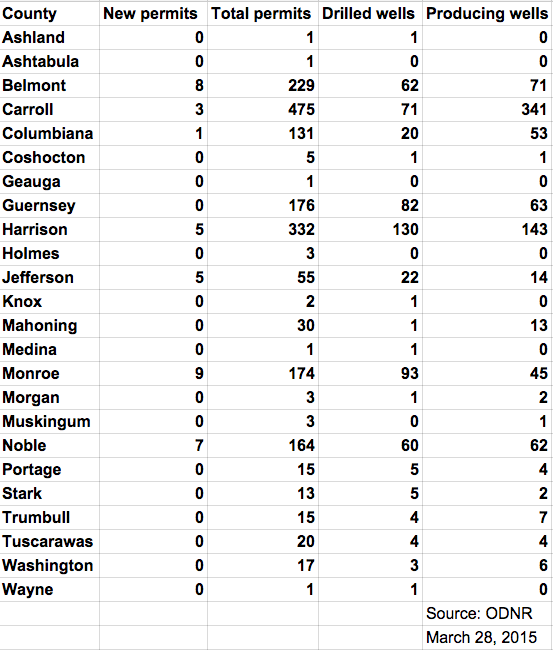 Belmont County had the third highest number of permits overall in March, with 229, as well as the third highest number of producing wells, with 71. There were also eight new permits issued in Belmont County in March. The permits were issued in York and Pease townships to American Energy Utica. Drilling has begun at two of the York Township locations.

The ODNR has issued 44 permits for horizontal drilling in the Marcellus shale. There are 29 drilled Marcellus shale wells in Ohio. No permits were issued in March.

The Pennsylvania Department of Environmental Protection issued 227 well permits in March, with the most issued in Bradford, Greene and Washington counties — with 45, 39 and 26 permits issued, respectively. In addition, the Pa. DEP reported 92 wells drilled in March, up from 72 in February.

Wetzel County had the most total permits issued within the in the Farm and Dairy readership area, with 12.

Marshall County followed closely, with 10 total permits issued by the end of March.