(Final installment of a two-part series on the timber and lumber industry in Holmes County and Ohio.)

MOUNT HOPE, Ohio — When his wife’s family opened a retail furniture store in the early 1990s, Ernest Hershberger thought the idea was crazy.

Working in a retail store did not appeal to him. He had grown up as a manufacturer, making things from wood — doors, drawers and parts for furniture and kitchen cabinets. He seldom had to deal with customers, and he preferred it that way.

But after the family store — Homestead Furniture — opened its doors in 1990, he found out he could do both, and that he needed to do both.

But he soon discovered an important lesson: Unless he had bulk orders, the builders were not interested.

So, he did what came naturally — he began making his own furniture and encouraging local wood shops to build furniture his customers requested.

Today, he’s one of the leading furniture makers in the area, with 48,000 square feet of his own manufacturing space, and he buys from about 80 other furniture makers. He sells retail, custom-made furniture to every state and eight countries. 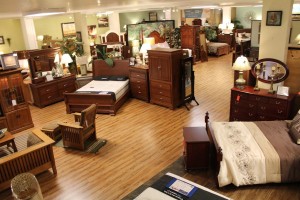 “With no game plan and no real desire to be in the retail business, here we are today,” he said. “We continue that trend. I never gave up on it.”

Today, Holmes County has between 450 and 500 individual wood shops. In fact, the area is believed to be the largest cluster of hardwood furniture makers and retailers in the nation.

Making the furniture locally allows the customer to get the exact specie of wood, color, design and functionality he or she wants. And, they have the peace of mind knowing it’s U.S.-made.

“It’s the American dream and why not?” Hershberger said. “Why should we not listen and produce what a customer wants.”

Although Hershberger works with many suppliers, his standards for lumber, construction and finish ensure a quality product with each piece.

As he puts it, each piece is a “heirloom of tomorrow. We don’t want it to last three, four, five years. We want the kids to fight over it.”

Hershberger was a pioneer in the Holmes County furniture industry, but there are others who got started about the same time, as well. In fact, most of the local furniture industry was born in the early 1990s, and has grown into one of the largest networks of hardwood manufacturers in the nation.

Roy Miller, of Country View Woodworking, launched his own furniture manufacturing business in 1993. He and four sons work for the business, which manufactures furniture for the wholesale market in the United States, and overseas.

He has about 70,000 square feet of manufacturing space at a location in Mount Hope, and a second in Midvale, Ohio, and employs 50-60 people. He also has a retail furniture store in Lancaster County, Pennsylvania, near East Earl.

Miller is seeing his greatest growth in contracts, which include large orders with hotels, restaurants, and other mid- to high-end destinations. He makes sales as far away as Hawaii, Africa and the Middle East, and sees no slowdown in the near future.

“The opportunities are absolutely endless out there,” he said.

Why? People want quality furniture that lasts, and that is made in the United States.

“Made in the USA is the simplest answer,” he said. “Without a doubt, that does it, even in contract.”

A strong demand is a good thing for the Holmes County region, which has an ever-growing supply of lumber and wood shops, but also people who want to work. 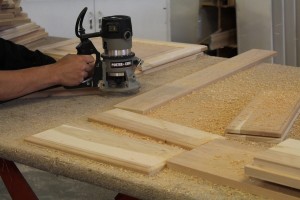 The area’s Amish population doubles about every 17 years, with about 800 young people graduating from Amish schools each year. The county is rich in farming, but as Miller puts it, “not everybody can be farmers anymore.”

This sets the stage for a growing number of people to work in the wood industry, which today employs more than 3,000 in Holmes County.

And, while many Amish youth grew up around farming, they also grew up around woodworking — often in their father’s woodshop or the shop of a neighbor. Miller remembers making his first piece of furniture, a gun cabinet, when he was just 14.

His father helped give him advice, but for the most part, it was his own project.

“I think that furniture, outside of farming … fits very nicely with a community of people who love to work, don’t mind getting up early and staying on the job, getting the job done and being there every day,” said Hershberger.

“And it also allows a dad and a couple of his sons to work at home like they would on a farm, instead of going to a big factory.”

Mel Yoder, whose father, John, started Yoder Lumber Co. in 1944, grew up around lumber and sawmills. He said it’s common for youth to be taught woodworking at home, before they go into the workforce. But more than woodworking — they’re taught the ethics of a full day’s work.

Each company has its own training procedures, but most spend the first few months going over the equipment, safety procedures and what’s expected.

Hershberger said some skills, like drafting and reading blueprints, are necessary for certain jobs. But if a worker doesn’t have those skills, or can’t get the hang of it, he tries to find them something else.

Hershberger said his company offers modern styles of furniture, as well as older styles. They do not claim to market “Amish furniture,” because the title is vague and misleading.

“I think the ‘Amish brand name’ right now limits what we’re actually doing,” he said, adding “really, if you think about it, what’s ‘Amish (furniture)’ mean?” 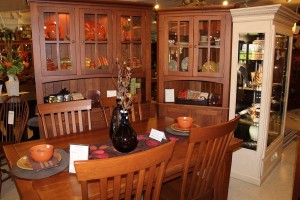 Instead, he tries to market wood furniture that people want, keeping up with the trends and styles.

Miller said the challenge for his business is that younger consumers live in a throw-away society. They want to change styles every few years, and get rid of what they have.

Reaching more customers. The average age of his customers are 45-50 — an age that is often a little more settled on what it wants. But Miller is building some newer furniture to reach younger consumers, as well.

“We are getting the younger crowd, but we worked hard at getting that,” he said. “I think most people would be surprised to see what’s coming out of our shops today versus what came out of them five to six years ago.”

One of the things woodworkers in the area do to market their products is participate in wood and forestry associations. One of the big ones in the area is the Hardwood Furniture Guild — roughly 125 members from northeastern and central Ohio, who work together to strengthen their industry and help meet each other’s market needs.

The guild is administered by the Holmes County Chamber of Commerce, and each spring it holds a hardwood trade show that draws wood businesses and about 1,000 wholesale buyers, from across the country.

“Our theory is, as a joint marketing group, we have a bigger presence, we have a longer reach and a rising tide will lift all boats,” said Hershberger, who is a guild member.

The future looks bright for the furniture and wood products industry, particularly as manufacturers and retailers continue to rebound from the recession era of 2006-2009. That particular downturn saw retail stores across the country go out of business, as well as some sawmills.

But the local area weathered it fairly well, according to local sources, and today, as the housing and retail markets recover, the local industry stands to gain.

“It doesn’t have to pick up much until there’s going to be quite the shortage, because there’s not much (lumber) inventory out there and there’s that much production that’s been lost,” Yoder said.

As Hershberger sees it, there’s a lot of upside ahead, if the current generation keeps in mind the next.

“We can, as a community, keep growing and keep up with our own population growth and I think the hardwood furniture market itself should be here to stay for a long time,” Hershberger said.

“And if we mess it up, I think it’s probably our own fault by not being aware of what the market trends are.”

One thing the industry seems to share, whether it’s producing lumber or furniture, is a sense of joy in making what the consumer wants, and knowing it’s going to last.

“To take a piece of wood and form it into a piece of furniture and put a stain on it and finish it, and send it out to a satisfied customer is absolutely one of the greater satisfactions,” Miller said.