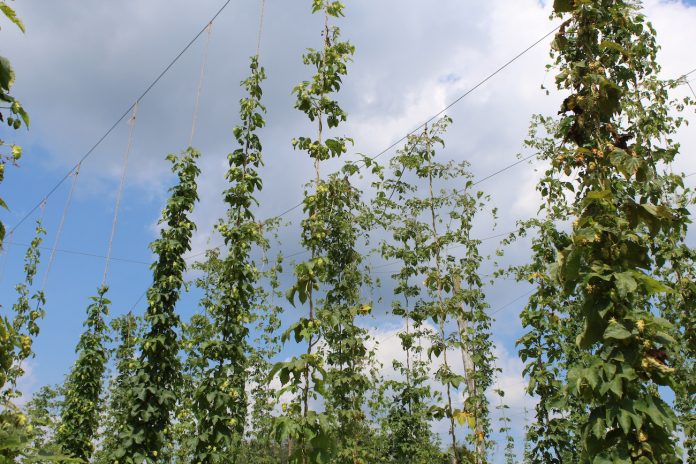 As the craft brewing industry grows in Ohio and Pennsylvania, so too does the hops industry.

Hops are one of the four basic ingredients needed to brew beer.

Seeing hop yards pop up might be a new sight in this region, but before Prohibition, the Midwest and Northeast were home to hundreds of acres of hops.

Demand is high, but growing and processing this specialty crop sustainably can be complicated.

What are hops, exactly?

Hops add bitterness to beer, balancing the sweetness of the malt. The essential oils in hops also add aroma. As an added bonus, hops act as a preservative, giving beer a longer life.

Hops are a perennial. They grow tall, climbing bines each summer from rhizomes that overwinter in the ground. Hop bines, a vine that climbs by winding around something rather than using tendrils, are trellised 18 or 20 feet above the ground.

The female flowers are called cones, and that’s what is harvested for beer production. Hops are typically harvested in August and September, depending on the variety.

Nowadays, most hops are grown in the Pacific Northwest. Washington, Idaho and Oregon strung a record 57,339 acres of hops in 2019, according to U.S. Department of Agriculture National Agricultural Statistics Survey data.

Compare that with about 200 acres of hops grown in Ohio and 100 acres in Pennsylvania, according to state researchers.

In 1880, New York produced the majority of the U.S. hops crop. There were significant hop yards in Ohio, Pennsylvania and Kentucky at that time as well, said Brad Bergefurd, horticulture specialist with Ohio State University Extension.

But disease and pest pressure grew. Then, Prohibition hit in 1920, and the demand for hops ceased.

Hops growers in the Pacific Northwest still had a market as they could ship their hops through coastal ports to international markets, Bergefurd said. The climate there worked well for hops, too.

By the time Prohibition was lifted in 1933, most eastern hop yards had been abandoned or re-purposed for other crops, Bergefurd said.

Craft brewing began to boom in Ohio in 2012, after former Gov. John Kasich signed a law in late 2011 that relaxed restrictions on small breweries.

Ohio went from about 45 craft breweries in 2011 to more than 300 in 2018, according to data from the Brewers Association.

Regulations on brewing in Pennsylvania began to relax during this time as well, and the same growth occurred. Pennsylvania went from 88 craft breweries in 2011 to more than 350 in 2018, Brewers Association data shows.

As the craft brewing industry grew, the hops industry followed.

“Once you have a market, you can grow any crop for that market if it’s feasible,” Bergefurd said.

While there was a handful of hops farmers around in Ohio before the craft brewing boom, the majority of the farmers got into it in the last 10 years, Bergefurd said. Ohio has about 100 growers and Pennsylvania has between 30 to 50 now.

A 2016 survey of Pennsylvania craft brewers, conducted by Penn State, found brewers want to use locally grown hops. They’ll even pay a premium for them, but the local hops need to be high quality.

But neither state is close to meeting the production needs for small breweries. Bergefurd said Ohio would need about 6,000 acres of hops to meet the needs of Ohio craft brewers.

Penn State researchers estimate they need about 1,000 acres to meet the needs of Pennsylvania craft brewers.

“There’s always going to be demand,” said Tanner Delvalle, a commercial horticulture educator for Penn State Extension. “As long as people are brewing beer, there’s going to be a demand. The problem here is scale.”

With high demand and low supply, growing hops might seem lucrative. Hops researchers often try to talk prospective growers out of it, though.

It’s a challenging plant to grow. The start-up costs are high, as is the labor needed to construct a hop yard, with the 22-foot-poles, overhead cable and twine.

“It’s not for everybody. We’ve had several hop farmers get started and then get out. It’s a very high labor, highly intensive management type of crop,” Bergefurd said. “If you want to kiss your summers goodbye and not have any fun, become a hop farmer.”

Ohio State University first put in hops in 2011 and now has three research hop yards across the state, Bergefurd said. They’re learning a lot about what varieties do well in different locations.

Hops take about three years to mature and produce a full yield of cones, so it takes time to recoup those costs, Delvalle said.

Before any of that, growers need to make sure they have a market for their hops.

“First thing you do before you break ground is find a brewer to buy your hops,” Delvalle said.

Hops can be used fresh. Most brewers prefer them in a dried, pelletized form.

Either way, they need to be used or processed within hours of being cut down or it will impact the quality, Delvalle said.

“You can grow the best hops, but ruin them in the processing phase,” he said.

Picking one bine by hand takes between 30 minutes to an hour. A mechanical harvester can pick up to 150 bines per hour.

After all that work, unless the hops make a good beer, it’s not worth much.

“It can’t compete at a higher price point if it’s not good,” said Jenny Napier. “Craft brewers are discerning customers. They’re not going to buy it again if it’s no good.”

Pennsylvania is investing in state beer production. In 2018, the Pennsylvania Liquor Control Board awarded $791,000 in grants for 12 projects to boost the state beer industry. Two of those projects were related to hops production.

Another round of grant funding was made available this year, giving preference to projects that would increase the production, quality or yield of Pennsylvania-produced hops and barley.

Ohio hasn’t seen that kind of state support, but hop growers banded together and formed the Ohio Hop Growers Guild in 2014. Without the guild, the industry would not have grown as fast in Ohio, Bergefurd said.

The guild buys supplies in bulk for members, hosts educational programs and helps with marketing. The guild has a quality stamp that ensures brewers that hops meet certain quality standards.

Jenny Napier said the camaraderie in the guild and the craft brewing industry at large is what will lead to success for all.

“Ohio brewers for the most part are very supportive of local products,” she said. “If they stick with us, we’re going to be successful at keeping this industry in Ohio.”