The district honored Joel Beeghly with its Farmer of the Year Award and Dom Viccari with the district’s Distinguished Service Award.

Farmer of the year

Joel Beeghly, owner of Shiloh Farms, a beef operation in North Beaver Township, was honored for his work protecting and preserving his pasture resources. 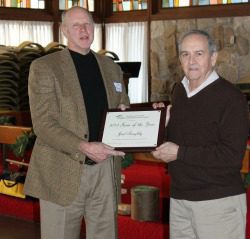 Working with the district and the USDA’s Natural Resources Conservation Service, he has secured cost-share funding through the Environmental Quality Incentive Program (EQIP), and has installed 6,500 feet of streambank fencing to control animal access to Sugar Creek.

In addition, he has constructed two stabilized stream crossings in his rotational grazing system, to give the cattle access to pastures on both sides of the stream. He also developed a spring that feeds multiple troughs that were installed on stabilized limestone and geotextile pads.

Beeghly is currently working to mechanically control invasive species such as multi-flora rose, on nine acres.

In 2012, Beeghly started working with the conservation district when he attended a manure management workshop sponsored by the district. Following the workshop, Beeghly partnered with the district to be a part of the district’s agricultural best management practice grant.

Through this grant, Beeghly will install a waste storage facility to properly store manure from his operation in the winter.

Beeghly is also a member of the Friends of the Mahoning River, the Shenango River Watchers and the Trumbull Canoe Trails Club and participated in Lawrence County’s public meeting for the Mahoning River Conservation Plan.

Dom Viccari was honored with the distinguished service award for his efforts to protect natural resources and to educate adults and children of the environment’s importance. 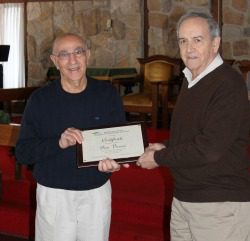 While working as the borough manager for Ellwood City, Viccari was involved in a number of environmental projects, ranging from replanting trees in the community park to educating students at Earth Day.

Most recently, and in partnership with the conservation district, Viccari started working on a project to reduce the amount of non-point source pollution that entered the Connoquenessing Creek through stormwater runoff.

In addition, Viccari recruited Ellwood City residents to sign up for a 50-gallon rain barrel, and assisted in the design of four awareness signs that remind residents that their nearest waterway is the Connoquenessing Creek.

In his retirement, Viccari has started volunteering to assist the conservation district in countywide projects such as a monofilament recycling program.

After the luncheon, Wilmington High School FFA members gave a glimpse of the deer mounting demonstration they are giving at the FFA competition at the Pennsylvania Farm Show.

The Laurel High School FFA members gave a presentation on how to devise a mechanical device to twist six pieces of baler twine together, which is then used to create a halter for a cow. They are also scheduled to compete at the Pennsylvania Farm Show.