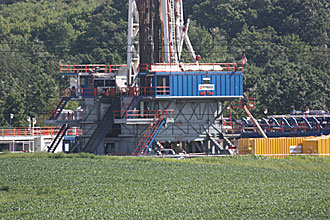 COLUMBUS — A recent industry-funded study estimating that development of shale natural gas and oil could create or support 200,000 jobs in Ohio greatly overestimates the economic impact of the industry, according to a new Ohio State University analysis.

Furthermore, the researchers say, focusing on jobs rather than other factors related to the growing industry is misguided.

The Ohio State researchers’ analysis suggests that the state could expect a net gain of about 20,000 jobs over the next four years from shale gas development.

“We have about 5.1 million jobs in Ohio, and we need to create about 100,000 jobs each year to keep up with natural population growth to start to tangibly reduce unemployment,” said Partridge.

If an industry could create 200,000 jobs over four years, that would be a remarkable achievement, he said. But the recently released industry-sponsored analysis used techniques for estimating job numbers that, though typically used by consultants, are not accepted best practices for such analyses.

“There are well-accepted techniques for coming up with these numbers. They are not typically used in industry reports, but in academic circles, at least, they are acknowledged as being much more accurate,” Partridge said.

The energy sector is one that’s more capital-intensive than labor-intensive, Weinstein said. As such, Ohio shouldn’t expect it to have a huge impact on employment growth.

“Any growth in jobs is good,” she said, “but this development just won’t provide the entire answer for Ohio.”

As part of their analysis, the researchers examined employment and income growth in several Pennsylvania counties. Though per-capita income has generally increased more rapidly in shale-gas areas, job growth has not always been higher in areas where shale gas development is occurring compared to otherwise similar areas not affected by it.

“It’s useful to look at what’s happened in Pennsylvania so far,” Weinstein said. “We’ll have to wait and see what happens in Ohio.”

Although the smaller jobs estimate is, not surprisingly, the first thing readers of the report might notice, it is not the most important message they tried to get across in their analysis, Partridge and Weinstein said.

“On the local level with shale energy development, there’s a sudden influx of money — from lease payments, platform construction, that sort of thing,” Partridge said.

“It’s a real gold-rush mentality. But what communities really want and need is long-term development. Typically, energy booms don’t provide that kind of sustainable growth. These communities need to be aware that there’s a boom/bust cycle, and they need to do what they can to plan for it.”

For example, communities involved in shale gas development see an abrupt invasion of out-of-town workers filling up nearby motels, hotels and restaurants.

The instinct might be to provide more housing or other provisions for the newcomers, Partridge said.

But such infrastructure won’t be needed after the initial phases of development, “and then someone has to do the maintenance and upkeep. The problem is that most communities are distracted by the short-term gains they’re experiencing rather than keeping their eyes on the long-term.”

Communities should seriously examine how they might use the boom years to develop new community assets that will remain long after the bust takes hold, Partridge said.

“They should work with industry to ensure it pays for new roads and infrastructure it needs to do business,” Partridge said. “They should figure out ways to capitalize on the new money to build schools or other community assets. They need to think about ensuring they have a long-term financial plan that will provide a cushion as the boom moves out of their area.”

The report also raises discussion of some of the environmental implications of shale gas development.

“We’re not environmental experts,” Weinstein said, “but we do believe we can add to the conversation about environmental considerations. Too often in the debate, environmental impacts of shale gas development are compared to doing nothing at all. That ignores the reality that in all likelihood, shale gas will supplant coal as an energy source, and shale gas is a cleaner fuel than coal.”

In the same way, an increase in jobs in the shale gas industry will likely mean a decrease in coal-related jobs, the researchers said. Such displacement needs to be accounted for in any economic analysis.